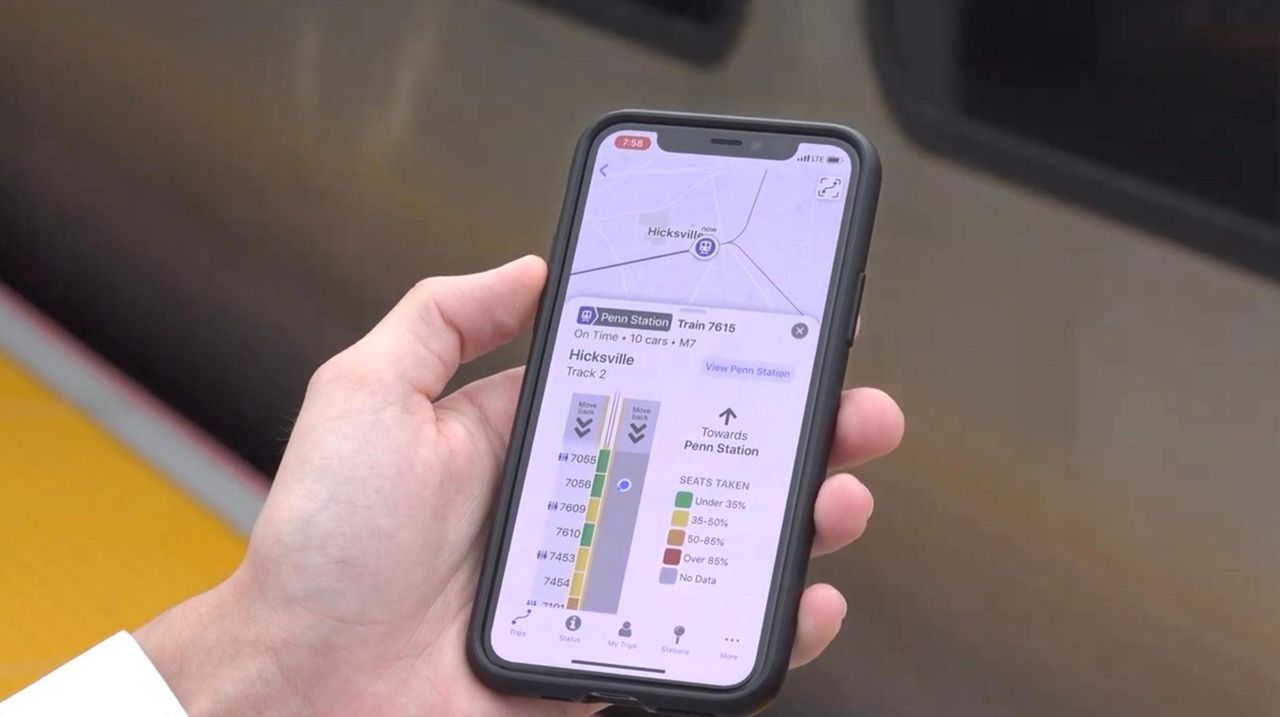 The LIRR introduced a new feature on its mobile app, which now includes the ability for commuters to get real-time information to avoid crowding on board most trains. Credit: Howard Schnapp; MTA

A major update to the Long Island Rail Road’s mobile app includes new features that could be especially useful in the age of social distancing because of the coronavirus, providing real-time information for commuters to avoid crowding on board most trains.

Included in the enhanced LIRR TrainTime, which will be available for free download on Tuesday, is a new functionality allowing users to choose less crowded cars, even before a train arrives at a station.

The first-of-its-kind feature in the U.S. uses “load-weight sensors” built into cars’ suspension systems to detect how many people are on board. It reports that information using a color-coded system: Green for cars with 0%-35% of seats taken; yellow for 35%-50%; orange for 50%-85%, and red for cars with 85% or more of seats taken.

The real-time information will be available for most electric trains, which make up about 90% of the LIRR’s fleet, and will be displayed on digital platform signs at Jamaica. Data will be updated every 10 seconds — giving riders the ability to monitor conditions as passengers board, including at Penn Station.

The app, which is already used by 70,000 people, can also tell riders where to position themselves on a platform to board a particular car.

“This was a priority for us before COVID, and it’s even more important now, as we’re trying to get people more comfortable returning back to work,” LIRR president Phillip Eng said.

Gerard Bringmann, vice chairman of the LIRR Commuter Council, the railroad’s state-regulated rider advocacy group, called the crowd-measuring system “a great idea,” although he questioned how useful it will be at Penn, where there is a “mad dash” to get inside a train car as quickly as possible.

“But if you’re standing at Hicksville, waiting for a Ronkonkoma train to come in headed toward Penn, that information is invaluable,” said Bringmann, who expects the feature will help put some commuters at ease as they return to their jobs.

“Every little bit helps,” Bringmann added. “You have a lot of commuters who are going to be a little bit antsy about coming back, about how safe it’s going to be to ride trains. Are we going to be able to do the social distancing?”

Although the LIRR invested about $100,000 on the new technology, railroad officials expect to achieve savings in the long run by using it to measure ridership, instead of hiring contractors to count passengers.

The app will offer popular features that have been part of the “MyLirr” app that will be phased out. Users will monitor their train, and connecting trains, on a live digital map, and will be able to automatically text that information to someone picking them up. The app will tell users which train car they are riding in and whether it will platform at a specific station.

LIRR TrainTime is introducing a feature offered by third-party apps, with varying degrees of reliability: push notifications of track assignments at Penn, Atlantic Terminal and Jamaica. Railroad officials said users will learn when and where their train is arriving at “the exact same second” as it appears at station departure and arrival displays.

“No longer will you have to stare at a board,” Eng said. “...You can go and social distance somewhere in the corner and see what track your train is coming in.”