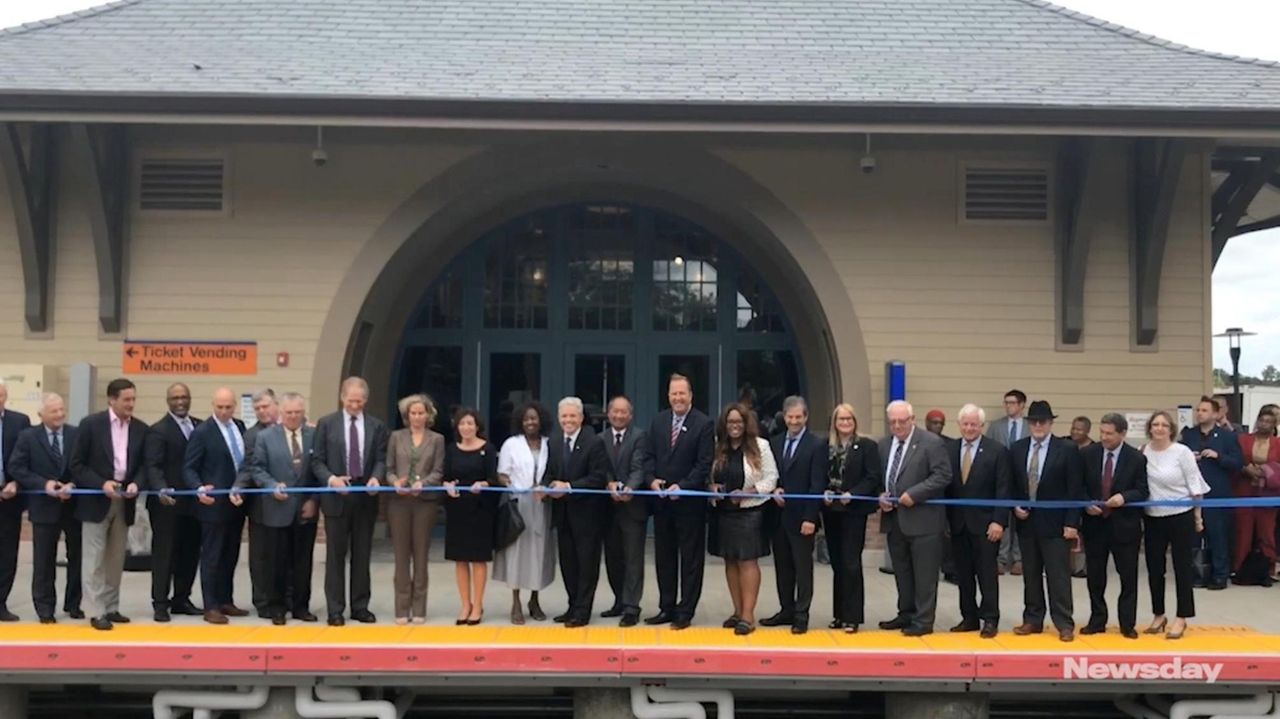 The Long Island Rail Road’s half-billion-dollar effort to construct a second track on its Main Line between Farmingdale and Ronkonkoma is complete, officials announced Friday.

At a ceremony at the newly constructed Wyandanch station, LIRR officials and elected leaders formally cut the ribbon on the completed 18-mile track, which has already been in use by the railroad for about a week. The completion of the project, which began in 2014, marks the first time in the LIRR’s 184-year history that trains are running on two tracks between Farmingdale and Ronkonkoma — a stretch of track used by 48,000 customers daily.

In a statement, Gov. Andrew M. Cuomo said the project’s completion “demonstrates our commitment” to transform the LIRR through 100 planned projects totaling $6.6 billion.

“The LIRR is the lifeblood of the region’s economy,” Cuomo said. “And projects like the Double Track and Third Track will help support future growth and vastly improve riders’ experience on the busiest commuter rail in the country.”

The Double Track becomes the first of several capacity-expanding megaprojects to come on line for the railroad, which has struggled in recent years to provide reliable service to a growing ridership. The LIRR — the busiest commuter railroad in North America — has moved 89 million people annually for the past two years, the most in nearly 70 years. It’s on pace to deliver its worst annual on-time performance in 19 years.

The 18 miles of new track provides the LIRR with extra capacity to run trains, including for “reverse commuters” traveling to and from jobs in Suffolk County. It also supports efforts to bolster Long Island MacArthur Airport in Ronkonkoma and surrounding development. And it allows the railroad to more easily work around any disruptions that occur in Suffolk.

“You can imagine, when we had just one track, [if there was] one incident on that track, we’d have to shut down service. We’d have no ability to move people east and west,” LIRR president Phillip Eng said Friday, speaking to a group of business, community and labor leaders. He called it “a proud day for all of us.”

“It shows that we can deliver when given the opportunity,” Eng said of the project, which was completed more than a year ahead of its original December 2019 target.

Project officials said they were able to shave 15 months off the project by taking advantage of new track-laying technology and by hiring the same contractors to design and build certain elements of the project.

Still, the project did encounter some 11th-hour technical challenges, including issues with malfunctioning new signal and switch equipment, which caused extensive planned and unplanned service disruptions for LIRR commuters in recent weeks.

Janno Lieber, chief development officer for the Metropolitan Transportation Authority, thanked customers for “putting up” with the construction-related glitches.

“They’ve been great about it,” Lieber said. “We look forward to giving them the kind of service they want and deserve.”

But not all commuters are happy about the project's completion. Dean Prentiss of Deer Park noted that with a new second track — and at some stations a new second customer platform — some commuters who were used to stepping off trains and walking directly to their cars now have to cross over from the south side of the tracks to get to parking lots on the north.

That can require walking several hundred yards to and across the nearest pedestrian overpass, or going to the nearest railroad grade crossing and waiting for the train to pull away before walking across. Prentiss said the change added as many as 15 minutes to his daily commute.

“Those 15 minutes are precious,” Prentiss said. “Now that they have two tracks . . . it should be a positive. Instead, they made it a negative.”

In response, LIRR spokesman Aaron Donovan said: "The benefits of reverse-peak service and a more reliable and faster commute for 48,000 daily customers far outweigh any inconveniences.”