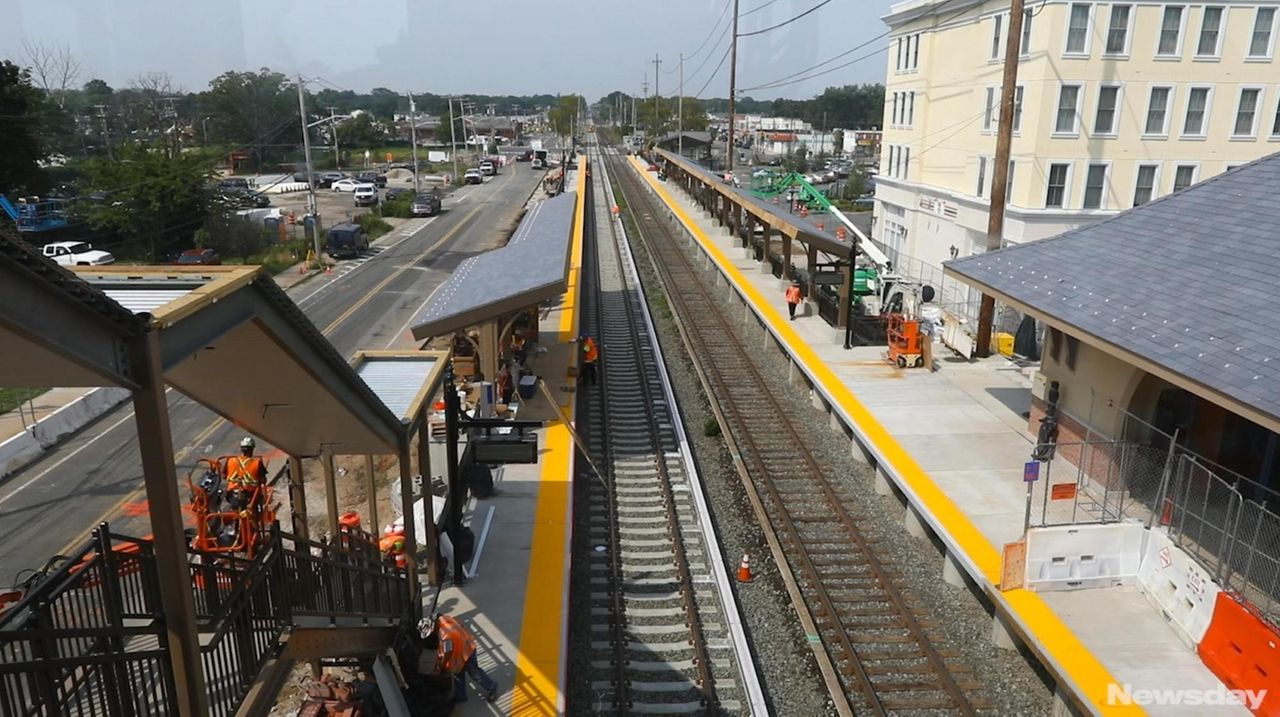 Christopher Natale, general chairman of the Brotherhood of Railroad Signalmen Local 56, explained on Thursday the status of the LIRR's second track being constructed between Farmingdale and Ronkonkoma and how it will help commuters.  Credit: Jessica Rotkiewicz; Newsday / Chris Ware

A second set of train tracks between Ronkonkoma and Farmingdale — a project at the top of the Long Island Rail Road’s wish list for decades — is weeks away from completion, providing the potential for improved service for tens of thousands of daily commuters, LIRR officials said.

Three years after LIRR crews laid the first segment of a new track in Ronkonkoma, the railroad’s half-billion-dollar Double Track project is scheduled to wrap up by the end of this summer.

As it races to the finish line, the LIRR's largest capacity expansion project in decades is causing some frustration, including in the form of required service outages throughout the summer. As one example, to complete the work, the LIRR is eliminating weekday overnight train service between Hicksville and Ronkonkoma for the next two weeks.

But with the original, single track already shifted — in some areas by as much as 7 feet — and nearly 18 miles of new track and third rail already installed, LIRR workers and private contractors are in the final stretch of their work. Crews have been installing and testing new switches and signals and putting the finishing touches on some station upgrades on the west end of the project path, including at Wyandanch and Pinelawn.

“We are jamming,” said Janno Lieber, chief development officer for the Metropolitan Transportation Authority.  “It’s really an intense push to get this done. And we’re excited to be reaching this point.”

“We fully expect to be done by the end of this summer,” LIRR president Phillip Eng added. “This is here. This is real.”

Once complete, the 184-year-old LIRR will, for the first time, operate on at least two tracks on its Main Line from Manhattan to Ronkonkoma — a trip made by more than 45,000 Long Islanders daily.

“People talked for decades about adding a second track and we’re not only doing it — we’re getting it done a year ahead of schedule," Gov. Andrew M. Cuomo said in a statement Friday. "This is part of our historic $5.6 billion investment in 100 projects like the Third Track to completely transform the LIRR, expand service and maximize economic growth in the region.”

Project officials say the new track will provide immediate benefit, including by allowing the railroad to more easily route around stalled trains and other service disruptions that take place on what was previously single-track territory. The railroad also plans to increase the frequency of reverse-peak service on the Ronkonkoma line just after Labor Day, better serving reverse commuters going to jobs in Suffolk.

The project’s benefits extend beyond LIRR riders, according to Kyle Strober, executive director for the Association for a Better Long Island, a nonprofit advocacy group, who said Double Track will have the most “strategic economic impact on Western and Central Suffolk” of any project since the LIRR electrified its tracks as far as Ronkonkoma 30 years ago.

“Double Track will make adjacent communities more desirable, serve as a catalyst for the revitalizations underway at the Ronkonkoma Hub and Wyandanch Rising, aid in the reinvention of property around Republic Airport and assist in unlocking MacArthur Airport’s true potential as a regional airport," Strober said.

Project officials say the full benefit of Double Track won’t be felt until the LIRR completes two other major infrastructure projects already in the pipeline: its $2.5 billion effort to construct a third track between Floral Park and Hicksville, and its $11.2 billion beleaguered East Side Access link to Grand Central Terminal. Both projects are expected to be complete by early 2023.

Combined, the three projects are expected to significantly increase the capacity of the railroad, which has struggled in recent years to meet the demands of its growing ridership. The LIRR — the busiest commuter railroad in North America — has carried 89 million riders the past two years, the most in nearly 70 years.

“It is a piece of the puzzle. It’s not the entire puzzle,” said Mitchell Pally, the MTA Board’s Suffolk County representative, who said he’s been part of discussions about adding a second track to Ronkonkoma since the 1970s. “The next two pieces are going to come shortly. You’re going to see a brand new railroad going up and down the spine of Long Island.”

Unlike the third track in Nassau, Double Track has encountered relatively little opposition and few obstacles since it was first formally proposed about eight years ago, in part because the project did not require building on any private property. It's also considerably cheaper than the third track project, which is more complex — requiring the elimination of seven grade crossings and other measures to minimize the impact on neighboring communities.

The project has also been widely supported by elected leaders across Long Island.

“A new era of regional transportation policy is moving ahead on Long Island, and the LIRR Double Track project is a prime example of how to reduce congestion, expand reverse commuting and provide a true intra-Island commute,” Suffolk County Executive Steve Bellone said in a statement.

Sen. Chuck Schumer similarly called Double Track a "critical" project, and one he helped support with federal funding. "It will drive business activity up — and commute times down," Schumer said, "And that is exactly what Long Island needs.”

Despite its popularity, the project has encountered obstacles along the way. A financial crisis at the Metropolitan Transportation Authority forced the railroad to delay construction of the second track — initially included in the agency’s 2010-14 capital program — by several years.

Also stalled has been an adjacent plan to reopen an LIRR station near Republic Airport in Farmingdale. Republic Station was envisioned as part of the second phase of the Double Track project, but the Town of Babylon still is considering necessary zoning changes for land near the tracks.

In 2016, Cuomo said the Double Track project was on pace to be completed 16 months ahead of schedule and $7 million under original estimates. In the final months of the project, added overtime costs required to get the work done in the accelerated time frame and other unforeseen expenses drove the price of the project from its original $387 million budget to $432 million.

And while the LIRR still says it’s aiming to finish the project by the end of the summer, LIRR union leader Christopher Natale, who represents many of the LIRR employees working on the project, said “it’s going to be close.”

Natale said the “rushed” pace of the project in its final months has resulted in various technical problems, including glitches in newly manufactured signal equipment. “You get it out in the field and it doesn’t work,” Natale said.

“They really compressed the schedule, so it makes it difficult for us to test out equipment, work out the bugs,” said Natale, general chairman of the Brotherhood of Railroad Signalmen Local 56. “If it was up to me, I’d want a whole other year on this project.”

The LIRR has acknowledged some growing pains that have come along with adding a second track in Suffolk, including systems testing that has required major service disruptions in recent weeks and unanticipated glitches in installing new signal systems that have resulted in some major rush-hour delays and cancellations. Lieber said the issues are to be expected with “a project of this size and complexity.”

Despite those recent hiccups, project officials defended the hastened pace of their work, saying that extending it over a longer period could add even more costs and noting that work crews are needed on other critical projects, including the Nassau third track and the installation of positive train control technology throughout the LIRR.

"We need to be able to give improved service sooner rather than later. That's one of the reasons it was so critical to accelerate this and move this forward," Eng said. "And we're really proud of the tremendous effort that's going on to make this work."