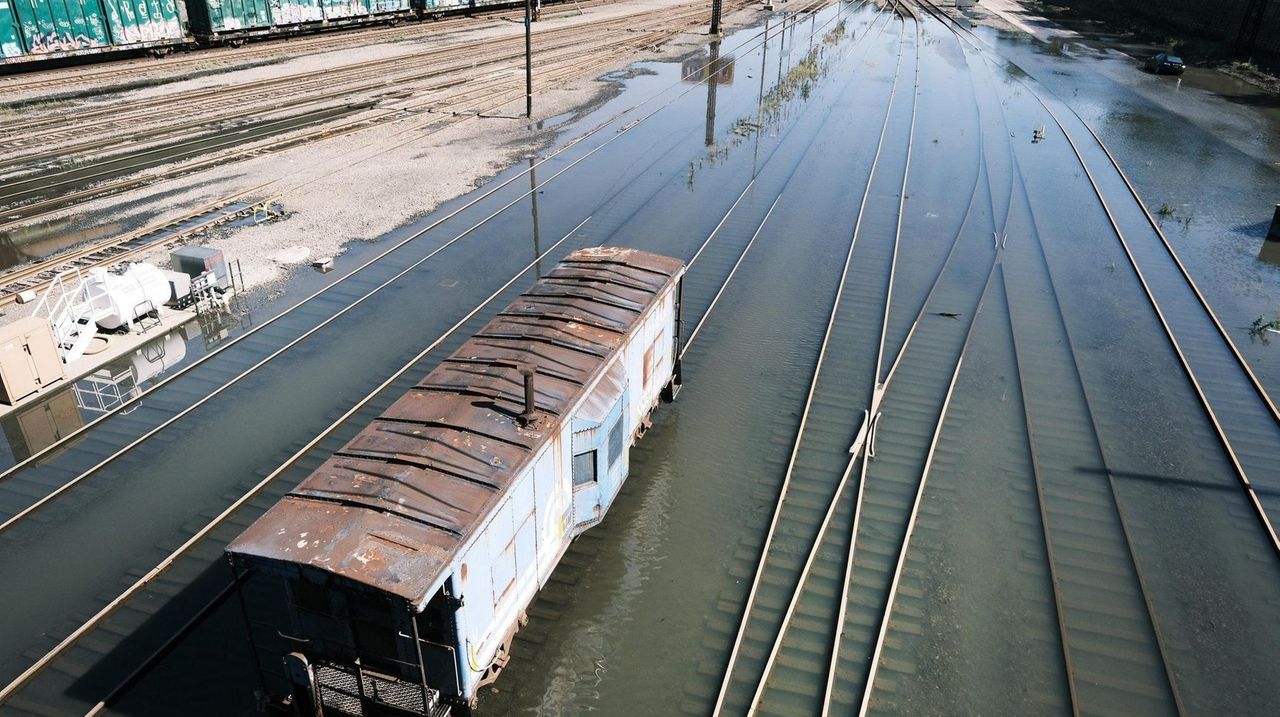 Historic flooding from Ida on Wednesday night crippled much of the region’s transportation system, including the Long Island Rail Road, which is not expected to restore full service until Friday morning, officials said.

Record rainfall and the ensuing flash flooding deluged train stations in New York City and on Long Island, including along the Port Washington line, which remained suspended east of Willets Point on Thursday afternoon.

Gov. Kathy Hochul gathered Thursday with transportation and elected officials at one of the hardest-hit stations on the line, Great Neck, where video shared on social media showed water rushing from the streets onto the station platform.

"I've been at Niagara Falls a thousand times. That's what the stairway looked like here," Hochul said.

The railroad had restored regular service on all lines, except for Port Washington, by Thursday afternoon — following a suspension of service in and out of the LIRR's New York City terminals on Wednesday night, and lingering delays and cancellations. Partial service was restored to the Port Washington line on one track by 4:30 p.m. Thursday. LIRR president Phillip Eng said he expected full service would be back by the Friday morning rush hour.

"We made a difficult decision [Wednesday] night, but it was the right decision," Eng said of the LIRR's call to suspend service in the face of the record rainfall, which reduced visibility for train engineers to "near zero."

Nassau County recorded as much as 4.8 inches of rain, in Glen Head, according to the National Weather Service, and East Setauket reported 6.8 inches. The NWS said a record 3.15 inches fell in New York City's Central Park in just one hour.

Eng said the impact would have been worse were it not for investments made in recent years to harden the LIRR's infrastructure against extreme weather, including by installing new water pumps at flood-prone locations, and replacing rock track bedding to improve drainage on tracks, including along the Port Washington line.

The city's subway system also was hit by the storm, which flooded stations and caused about 1,000 customers on 18 different trains to be stranded during the overnight hours. It was the second time in less than a week that passengers were stranded on disabled subway trains for prolonged periods. On Sunday night, a Con Edison electrical disruption resulted in 18 trains being stranded in between stations.

Lieber said the flooding in the subways was due to street-level drainage being "overwhelmed," forcing water into the subterranean transit system. "The subway system is not a submarine," he added.

Lieber noted that the MTA upgraded its infrastructure after Superstorm Sandy in 2012 to make it more resilient to coast flooding. But more needs to be done to protect the transit system from flash flooding, like it saw Wednesday night, he said.

"In the era of climate change, we're going to have these extreme weather events that create flooding even at much higher elevations," Lieber said. "Clearly it's more urgent than ever."

The Nassau Inter-County Express, or NICE Bus, advised customers of delays, detours or route cancellations caused by road conditions from rain" and flooding early. The n21, n22, and n27 lines, which serve North Shore communities, all reported detours Thursday morning. Suffolk County Transit, on its Twitter account, said there were no detours or delays.

The region’s airports also were impacted. Both LaGuardia and Kennedy airports reported above-average delays and cancellations, according to flightaware.com, a website that tracks airline disruptions. LaGuardia saw 95 canceled flights from around 4 p.m. Wednesday until the same time Thursday, and JFK had about 88 cancellations during that period.

At Long Island MacArthur Airport in Ronkonkoma, the airport's website showed almost all arrivals and departures being on time, with only two 15-minute delays that Islip Town officials said were not related to the weather.