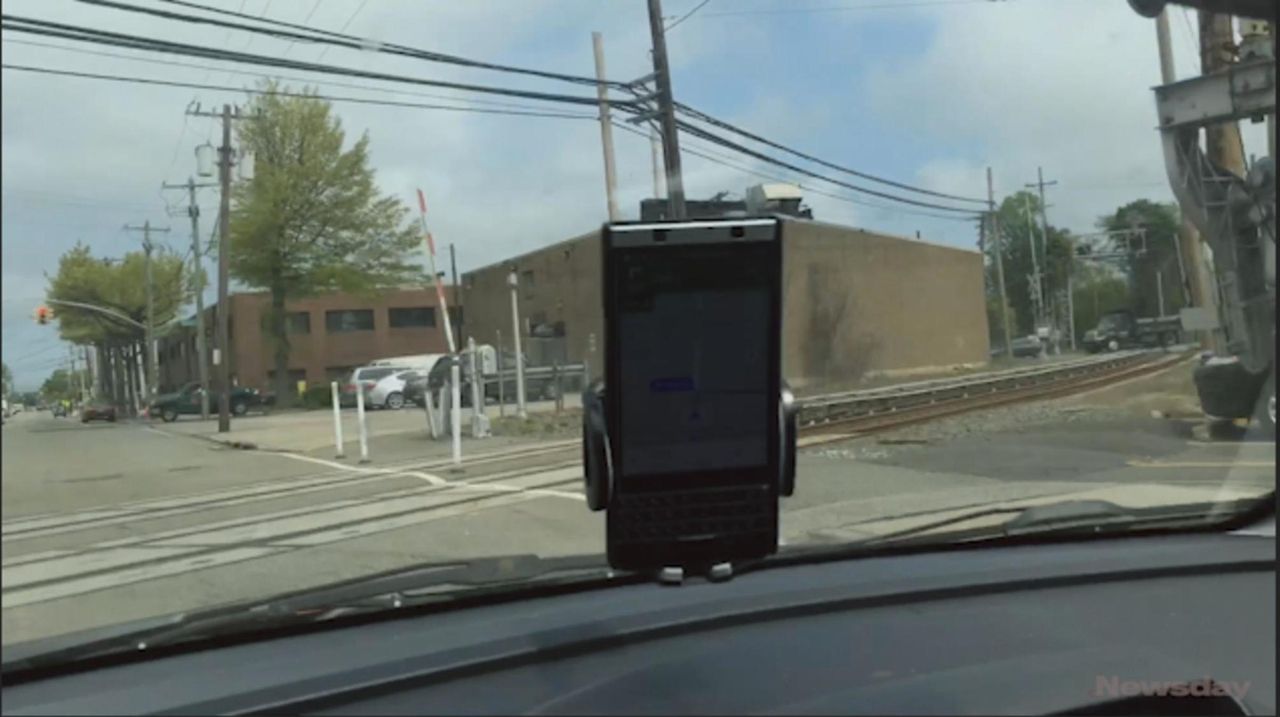 To help solve the growing problem of motorists driving onto tracks at crossings after misunderstanding GPS directions and being hit by trains, the railroad is extending painted roadway striping across the tracks at Willis Avenue in Mineola and 295 other grade crossings adjacent to parallel roads, the LIRR said on Thursday, May 10, 2018. Credit: Newsday / Alfonso A. Castillo

The Long Island Rail Road plans safety upgrades at all of its nearly 300 grade crossings this year to address the growing problem of motorists confused by GPS directions driving onto train tracks.

The enhancements include roadside striping that extends over tracks, and reflective devices designed to more clearly identify crossings. The work was originally planned for just 20 crossings this year, then was increased to 65 by new LIRR president Philip Eng. LIRR officials said Friday that, as part of Eng’s efforts to expand the railroad’s Performance Improvement Plan, the LIRR will upgrade all 296 of its crossings in 2018.

In addition, the LIRR is looking to team up with navigation service providers to integrate safety alerts about crossings into their apps. Officials have not disclosed the cost of the safety upgrades.

David Mayer, the chief safety officer for the Metropolitan Transportation Authority, said the changes aim to “help prevent drivers from mistaking the tracks for a roadway.”

Even if no crash takes place, incidents the LIRR refers to as “an unauthorized vehicle on the tracks” can result in major service disruptions affecting thousands of commuters.

“A GPS unit might say, ‘turn right ahead,’ meaning, turn right at the next roadway intersection,” Mayer said. “In poor visibility, like snow or fog or a dark night, when the motorist sees the white edgeline interrupted by the railroad crossing, he or she might mistake the crossing for the road and inadvertently turn down the tracks.”

According to the LIRR, there have been 21 incidents this year of cars driving onto tracks, as compared with nine during the first four months of 2017 — an increase of 133 percent.

A pair of accidents that occurred in March illustrate the dangers of vehicles driving on the railroad’s tracks.

On March 23, a driver who MTA officials say misunderstood GPS directions turned onto the tracks at the Willis Avenue crossing in Mineola. The driver escaped from the car before it was struck by a nonpassenger train, resulting in a huge fireball and extensive damage to the car and the tracks, and hours of delays on several LIRR branches.

Three weeks before that, a woman who drove her car onto the tracks just east of Northport was struck and killed by a train. It’s unclear whether an electronic navigation system played a role in that accident.

“This was not a problem until GPS came along,” said MTA Board member Mitchell Pally, adding the phenomenon has offset increased efforts by the MTA to prevent crossing accidents, following a Metro-North train crash at a crossing at Valhalla in Westchester County in 2015 that killed a motorist and five train passengers.

Pally said the efforts, which have included improved signage at crossings and public-awareness campaigns, are no substitute for alertness and common sense.

“Drivers have to be more aware of their surroundings,” said Pally, of Stony Brook. “You can’t just decide, ‘If it says ‘turn right,’ I’m going to turn right, regardless of whether I’m turning onto railroad tracks or not.’ ... That’s only a suggestion. It’s not an order by the machine.”

To help make clear that its tracks are not meant for cars, the LIRR has already begun installing “delineators” — flexible and reflective vertical poles — along the side edges of crossings and bisecting the tracks with painted solid white stripes that extend from the roadway.

The railroad has prioritized crossings near roadways that run parallel to its tracks, where the likelihood for GPS users to make an errant turn is the highest.

Desiree French, a spokeswoman for the Federal Railroad Administration, said the agency “is aware of the issue” of GPS users driving onto tracks.

French said the FRA encourages transportation agencies to investigate safety improvements such as those being undertaken by the LIRR, and is “exploring whether navigational software can help in this area.”

The LIRR, too, is looking at ways GPS service providers can be part of a solution. MTA officials said they are seeking to expand an existing partnership between their Bridges & Tunnels unit and Google-owned navigation app developer Waze to incorporate information about the LIRR right of way.

Mayer expressed interest in working with other GPS providers to include similar features in their programs.

Despite the pervasive problem of drivers accidentally turning onto tracks, the LIRR said the most frequent cause of accidents at railroad crossings remains motorists ignoring lowered gates and other safety devices in a rush to get across the tracks.

There were 17 instances of a train striking a vehicle at an LIRR crossing last year, including one in which a driver died while attempting a U-turn at a Brentwood crossing. The number of accidents was up from seven in 2016.

Nationally, there were 2,108 accidents involving highway vehicles and trains at grade crossings in 2017, a 3.2 percent increase from the prior year, according to the FRA. Those incidents resulted in 273 deaths.

The MTA’s increased focus on crossing safety has also included stepped-up police enforcement to ticket motorists who drive through active crossings. MTA police issued 1,790 summonses at LIRR crossings last year — up from 1,716 in 2016.

Gov. Andrew M. Cuomo in January became the latest state official to propose installing cameras at grade crossings and authorizing the LIRR to fine drivers photographed illegally driving through them. Pending legislation has passed in the State Senate, but the Assembly has not taken action.

The LIRR also continues educational-outreach efforts, including through its relationship with Operation Lifesaver, a national advocacy group that trains railroad employees in speaking to the public about crossing safety.

Libby Rector-Snipe, a spokeswoman for the nonprofit, said, while engineering and enforcement are important, Operation Lifesaver’s focus is on “empowering drivers to always be alert.”

“In any sort of situation, you should interpret your surroundings and make your best judgment — regardless of what your GPS is telling you to do,” she said.

Mayer said the MTA is also working on plans for more extensive traffic-control devices at some crossings, including at Deer Park and Oceanside, using a $5 million federal grant it was awarded in 2016.

Combined, the LIRR’s efforts account for what’s frequently referred to as the “three ‘E’s” of grade crossing safety — engineering, education and enforcement. But Mayer noted there is a fourth: elimination.

As part of its $2 billion plan to construct a third track between Floral Park and Hicksville, the LIRR plans to eliminate seven crossings along the 10-mile corridor, either by building roadway underpasses or closing off the roadways altogether .

296: Number of railroad grade crossings throughout the LIRR.

21: Number of incidents involving motorists driving onto LIRR tracks in 2018.

1,790: Number of summonses issued in 2017 by MTA police to motorists illegally driving through LIRR grade crossings.

17: Number of incidents of LIRR trains striking vehicles at grade crossings in 2017.

2,108: Number of incidents of trains striking vehicles at grade crossings throughout the nation in 2017.

273: Number of deaths resulting from trains striking vehicles at grade crossings throughout the nation in 2017.