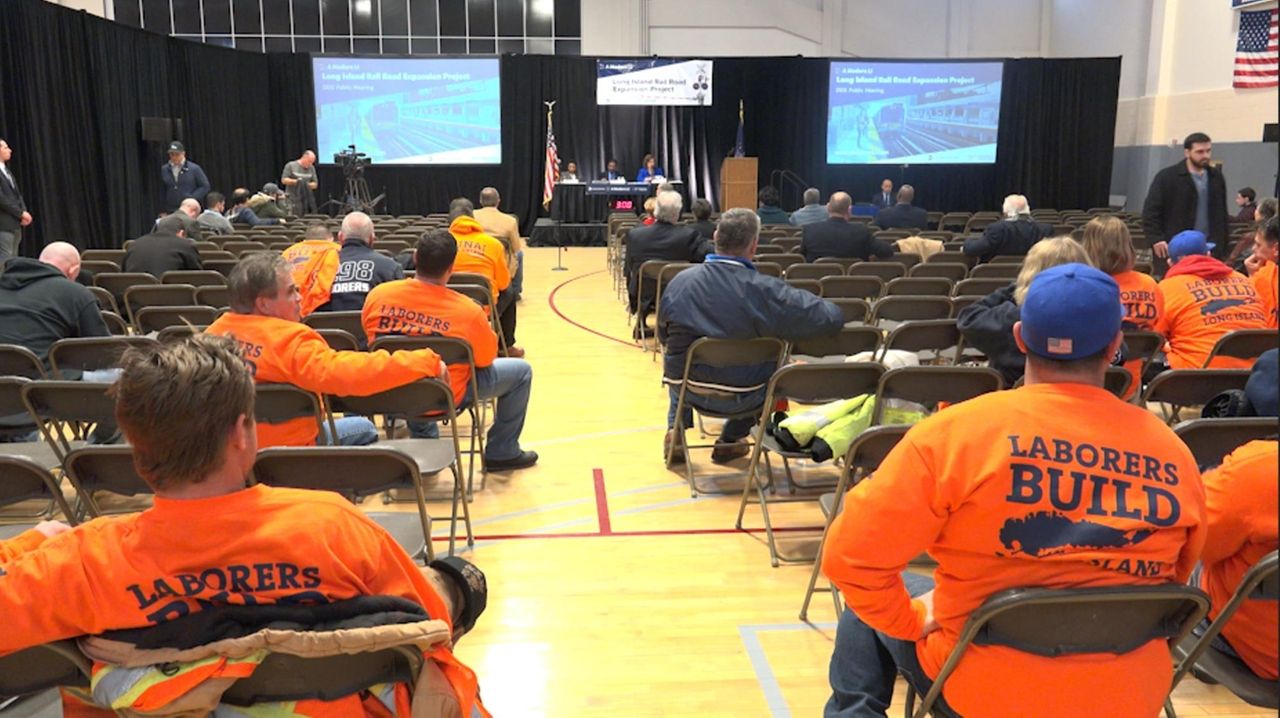 More than 100 people attended the first of six public hearings about the LIRR third-track expansion project on Tuesday, Jan. 17, 2017, in Westbury. MTA chairman Thomas Prendergast discussed the goals of the plan to construct a 9.8-mile long third track between Floral Park and Hicksville, while some residents voiced their support or concerns about certain provisions.  Credit: Newsday / Chuck Fadely

The Long Island Rail Road’s proposal to build a third track on its Main Line through Nassau County received overwhelming support during the first day of public hearings this week on the $2 billion project.

The series of hearings, which kicked off Tuesday in Westbury, represents among the last opportunities for the public to formally weigh in on the LIRR’s plan to construct a 9.8 mile third track within the LIRR’s existing property between Floral Park and Hicksville. The hearings continue Wednesday at Hofstra University and Thursday in New Hyde Park. Comments can also be submitted through Feb. 15.

The majority of the public speakers during two separate hearings at the Yes We Can Community Center in Westbury represented businesses, unions, and other institutions pushing the project’s promise to transform Long Island by providing more reliable LIRR service, creating jobs, growing the economy and keeping young people in Nassau and Suffolk.

Kevin Law, president of the Long Island Association, called it “the most important infrastructure project to happen on Long Island in decades.”

“This is a project that should have happened decades ago,” said Law, who also co-chairs the Right Track for Long Island Coalition, a consortium of project supporters. “And decades from now we will look back on this project and people will say, ‘Wow I can’t believe Long Island went this long without this important project.’ ”

Kyle Strober, executive director of the Association for a Better Long Island, a business group, said that by improving service reliability, investing in improvements to communities along the railroad’s right of way, and helping bring workers to jobs on Long Island, “the third track has the means to exponentially increase the power of mass transit to benefit all of Long Island.”

“We have an aging railroad system that was once constructed when Long Island’s chief export was oysters,” said Strober, who acknowledged that the project’s construction could cause some pain in neighboring communities. “But how can we make anything better without improvements that require some sort of construction?”

Ann and William Corbett, members of Citizens Against Rail Expansion, said they feared the third track project would be a pretext to increasing freight rail on the LIRR’s Main Line, unearth contaminated soil during construction, and last much longer and cost far more than the current estimates of 3 to 4 years and $2 billion.

LIRR: Your chance to speak on 3rd rail

The crowdTuesdaywas far more receptive to the third track than those at May public hearings on the project at the same site. In a statement, MTA chairman Thomas Prendergast said project officials heard the public’s concerns at the previous hearings and addressed them in a recently-released environmental review of the project.

“Governor Cuomo promised a completely new project where we listen to people’s concerns and address them, and that’s exactly what’s happening,” Prendergast said. “We encourage people to continue to comment to help us make this the best project it can be.”

The outreach efforts won over Westbury Mayor Peter Cavallaro, who previously raised strong concerns about the project’s impact on his village. At Tuesday night’s hearing, Cavallaro commended project officials’ “good faith job” in addressing his village’s concerns, and said Westbury is “supportive” of the project.

“We look forward to working with the railroad and other staff members as we go forward,” Cavallaro said.