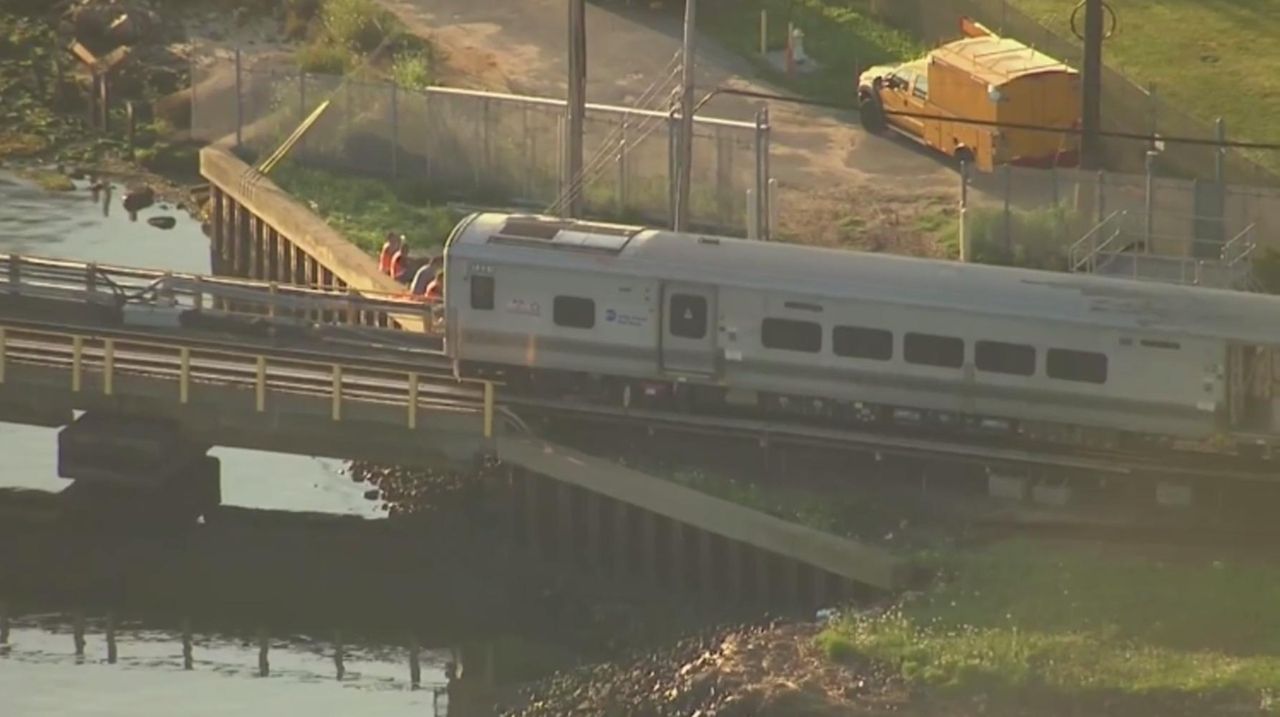 On Tuesday morning, July 18, 2017, the Long Island Rail Road announced all service on the Long Beach branch had been temporarily suspended due to a disabled train blocking access to the Long Beach yard. Credit: News 12 Long Island

A train derailment in Long Beach Tuesday added another complication to the LIRR’s “summer of hell,” but the MTA’s bolstered bus fleet helped lessen the pain for thousands of commuters.

At about 5:15 a.m., said MTA chairman Joe Lhota, one car of a train moving 4 to 5 mph partially came off the tracks as it was being repositioned at the LIRR’s Long Beach rail yard, the branch’s terminal point.

Because the train was “crisscrossing” the yard when it derailed, it blocked access to the yard, resulting in a temporary suspension of service on the Long Beach branch, used by about 20,000 customers a day. There were no passengers on the train and no one was injured, Lhota said.

The LIRR notified customers about the suspension before 6 a.m., Lhota said, and “immediately mobilized our buses” to transport customers on the branch to Lynbrook or Valley Stream, where they could transfer to westbound trains.

By 7:30 a.m., Lhota said, the LIRR had restored partial train service on the line and was able to move customers to Jamaica for connecting trains to Penn Station and Atlantic Terminal.

At about 3 p.m., the LIRR announced it had restored full service on the line and there would be no impact on the evening commute.

Lhota said that while the incident “did not have widespread implications” throughout the LIRR — as a problem in one of the East River tunnels would — it did result in some extra crowding on Babylon trains that made extra stops at Lynbrook or Valley Stream to pick up passengers transferring from buses.

The derailment was a “perfect example” of the importance of having coach buses available to supplement rail service during July and August while an Amtrak construction project at Penn Station reduces the LIRR’s rush-hour capacity, Lhota said.

The buses have not been heavily used by customers since the disruptions began more than a week ago, leading the MTA to scale down the extra service late last week.

“Having this particular incident really highlights that when you have buses and you can deploy them in the proper way, you can get the commuters moving again,” Lhota said.

The disruptions Tuesday morning only added to woes already being faced by commuters because of the Penn Station service disruptions that began last week. Although service has run mostly smoothly, there have been some hiccups.

“We know this is going to be a difficult summer, so the LIRR needs to do a better job of having a contingency plan to get people to the city,” said state Sen. Todd Kaminsky (D-Long Beach), in a telephone interview Tuesday morning.

Kaminsky, one of the leading voices in Albany for LIRR reform, said the delay in getting buses to stranded commuters meant some were shut out. Lhota said the buses, which had to be deployed from different locations throughout the Island, had to navigate traffic to get to Long Beach, but still made it there within about an hour after the initial derailment report.

Commuters praised the LIRR for providing buses and having personnel available to answer questions, but were still aggravated.

“It’s an inconvenience and it’s very hot,” said Louis Prima, 53, of Long Beach. “How long does it take to move a stopped train? The station has been closed for hours.”

Richard Becker, who commutes four days a week from his home in Lido Beach, took the railroad’s problems in stride. “It’s not that bad; it’s a mechanical problem,” said Becker, 59, who usually takes the 7:39 a.m. train. “These things happen on a hot day. What are you going to do?”

Later, at the tail end of Tuesday’s rush hour, service on nearly all LIRR lines was delayed for nearly 90 minutes due to signal troubles near the Jamaica station, officials said.