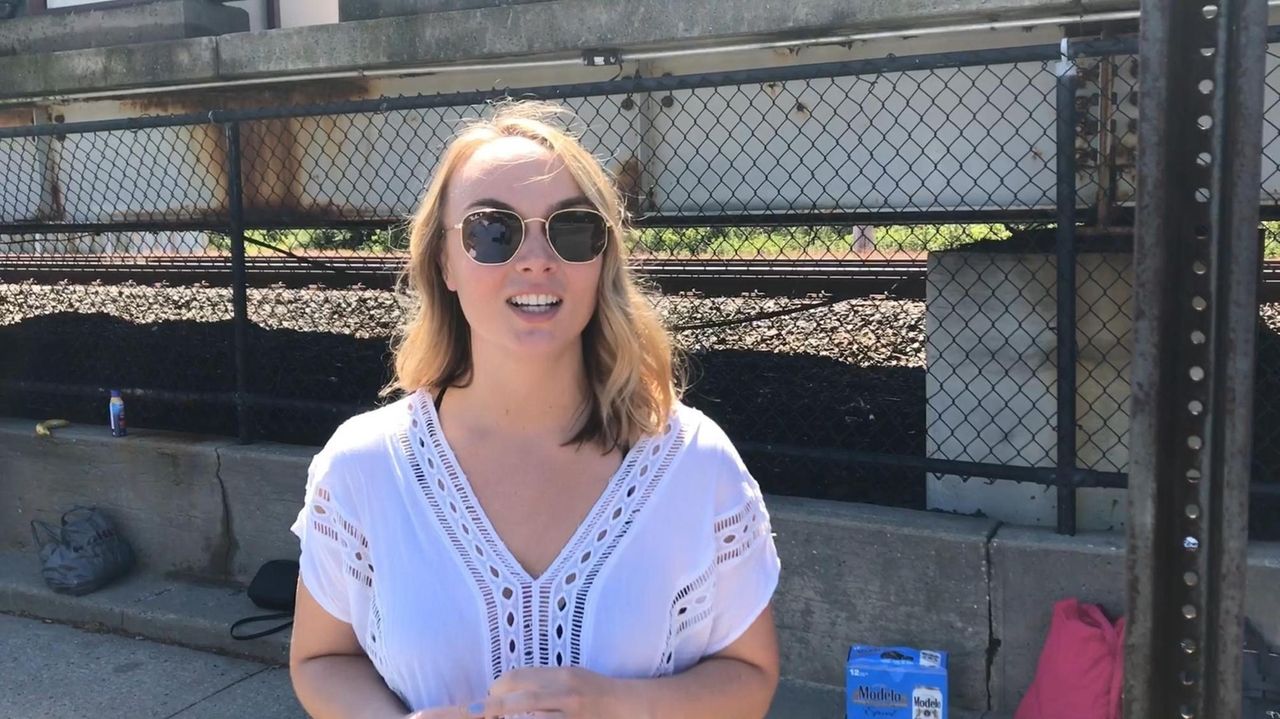 Colleen Lawrenz, 23, of Hampton Bays, talked about waiting for an hour on Sunday for a shuttle train to Montauk before the LIRR sent a bus to the Hampton Bays station, after derailments early Saturday scrambled train schedules and cut service between Patchogue and Hampton Bays. Credit: Newsday / David M. Schwartz

The Long Island Rail Road expects to restore normal service on its Montauk line Monday, two days after train derailments near Speonk jumbled the travel plans of holiday beachgoers during one of the busiest weekends of the summer, agency officials said Sunday.

LIRR staffers were working "around the clock" on Sunday to repair the damage caused early Saturday morning when an eastbound passenger train sideswiped an empty work train near Speonk, causing the engine on one train and the last car on the other to derail, an LIRR official said Sunday.

No one was injured in the collision, which halted train travel between Patchogue and Hampton Bays. The LIRR deployed buses to shuttle passengers between the two stations. The work train was unoccupied, but the collision caused the engine of the Montauk train and the last car of the work train to derail, the LIRR reported.

Customers traveling to the Hamptons/Montauk may wish to consider alternate branches or means of transportation to avoid transfers. LIRR crews have rerailed the incident trains Track personnel continue to evaluate the extent of the damage and investigate the cause of this incident

"Although there were no injuries in the derailment, the track damage was extensive because it was caused by the heavy weight of the locomotives as they derailed," Donovan said. "Crews will continue to restore the tracks throughout the day today, as they have since yesterday."

The work includes getting the derailed trains back on the rails, repairing switches and rebuilding long stretches of damaged track, Donovan said.

Officials are still investigating the cause of the accident, he said.

The service disruption put only a slight damper on the moods of travelers transferring in Hampton Bays for points east Sunday morning. About two dozen passengers lathered on sunscreen and chatted about beach plans as three LIRR employees kept them updated about delays. One shuttle train from Hampton Bays never showed Sunday morning. Instead about 15 passengers boarded an MTA coach bus.

Colleen Lawrenz, a 23-year-old student at Weill-Cornell Medical College in Manhattan from Hampton Bays, waited an hour with a group of friends hoping to head to Montauk.

“I’m from here. I’m pretty used to the trains being wishy-washy, but this is pretty bad,” she said. “The train’s running on island time and now the train has derailed my fun.”

Angie Murphy, 39, and Brendan O’Flynn, 47, were traveling from Brooklyn Heights with their 4-year-old daughter Oona to see a friend in Southampton and took the ride on a yellow school bus from Patchogue in stride as part of a weekend adventure.

“No complaints,” Murphy said as they waited for a friend to pick them up in Hampton Bays. “We’re having a bit of an exploring day.”

The couple was looking into Uber for a ride back to Patchogue tonight.

The LIRR suggested travelers consider alternative means of transportation. For some, it was the Hampton Jitney bus service.

"We've got a lot of passengers that called last second to get on and fill any available seats," he said.

Those available seats were few, Withrow said, as most of the buses were fully booked before the holiday weekend. The Jitney added extra staff Saturday and additional buses Sunday, Withrow said. "We knew we were going to have this rush."

Despite the issues out east, LIRR passengers at Penn Station Sunday morning reported few issues with their trips to alternative beach destinations.

Steve Nichols, 48, of Manhattan, was heading to the Jones Beach Air Show.

“There were no delays on our train. I thought there was going to be more of crowd here, but it’s been quiet," he said.

The Memorial Day weekend travel trouble began when a Montauk train that left Penn Station shortly after 1 a.m. and was due to arrive at 4:09 a.m. sideswiped a work train east of Speonk during a passing maneuver at 30 mph, an MTA spokesman said.

The LIRR carried more than 8,600 riders to the Hamptons on Friday, a spokesman said. Last year, the railroad moved another 4,000 customers east of Speonk on the Saturday of Memorial Day weekend alone.

Saturday’s derailment happened along one of the more underdeveloped stretches of track along the LIRR system. East of Babylon, the LIRR’s Montauk line is not electrified and runs largely on a single track. Trains must pull over to side tracks to allow others to pass by.

Past incidents of LIRR trains hitting each other:

July 17, 2015: Two passenger trains going in opposite directions sideswipe each other just west of Jamaica Station during the evening rush. The LIRR later said one engineer failed to obey a stop signal.

Nov. 19, 2008: Two westbound trains bump each other as they pull out of Jamaica station during the morning rush hour. Five passengers suffer minor injuries. LIRR officials said one of the engineers missed a stop signal and sideswiped the other.

LIRR: Train accident leads to service disruptionTrain service to Montauk and the Hamptons will be suspended all day after a passenger train sideswiped a work train early in the morning, partially derailing both and causing extensive damage, officials said.