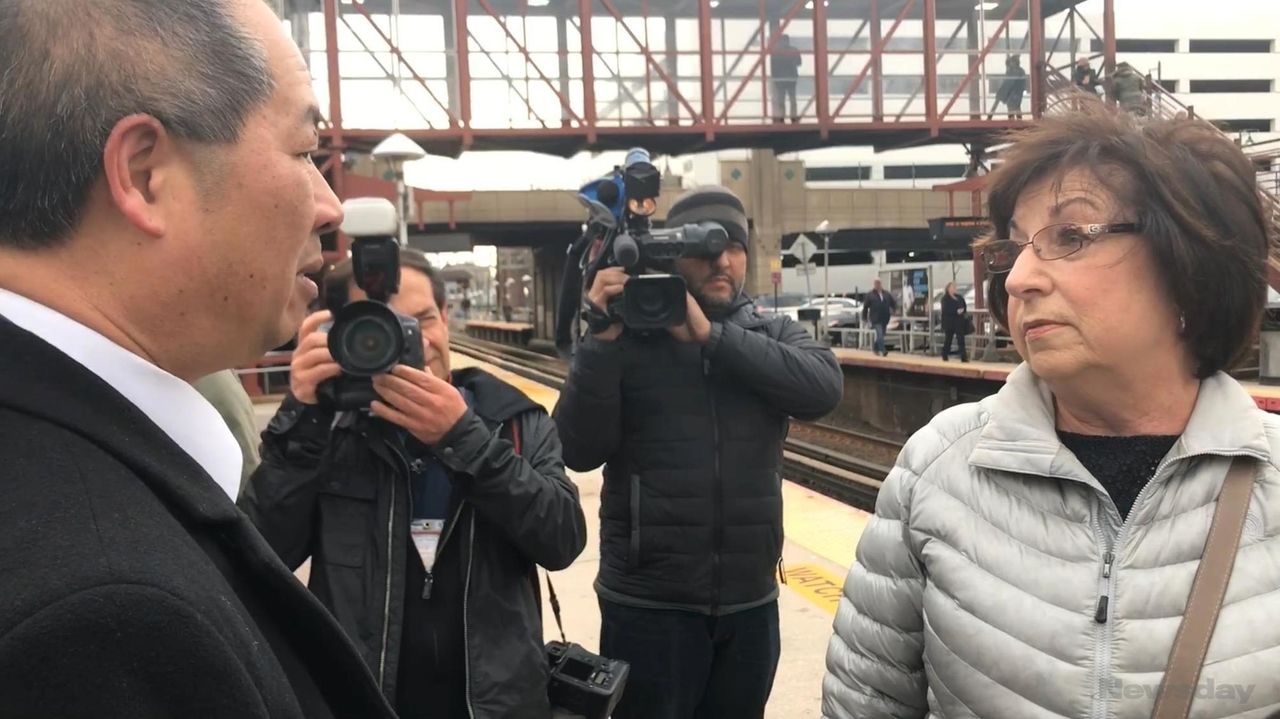 The new president of the Long Island Rail Road Phillip Eng began a listening tour Tuesday -- his second day on the job and a day when a switch problem disrupted the morning commute. Credit: Newsday / Alfonso Castillo; Howard Schnapp

The LIRR’s new president began the process of rebuilding the strained relationship between his office and alienated railroad commuters Tuesday, vowing to “get this right” where past leadership got it wrong.

Phillip Eng spent about two hours meeting and chatting with LIRR riders at the busy Mineola station Tuesday morning. It was the first stop of a listening tour that included a stop at Penn Station on Tuesday evening, and will continue Wednesday with visits to Ronkonkoma, and Atlantic Terminal in Brooklyn.

The scheduled Mineola visit came as commuters dealt with widespread train delays and other service disruptions caused by an Amtrak switching problem at Penn Station that was first reported shortly after 4 a.m. The latest rush-hour service glitch was on the mind of commuter Roseann Buglione of Mineola when Eng approached her at Mineola station.

What do you want to tell the new LIRR president?

“It’s a pleasure to meet you. I hope you’re going to get this right. Nobody else has,” Buglione said.

Eng sought to reassure her, saying: “We are going to get this right, and we’re going to focus on our customers.”

Eng, 56, of Smithtown, took over as LIRR president on Monday after the departure last week of Patrick Nowakowski, who resigned following a slew of recent railroad service and communications problems that contributed to the LIRR posting some of its worst on-time performance numbers in years.

By and large, Eng said commuters he spoke to were “appreciative” to see the new railroad president meeting and listening to customers.

“There have been some folks that have been very upfront with me with regards to their dissatisfaction, but that’s fair,” Eng said. “They need to voice that to me directly, and I need to make sure I take that back and that we address those concerns.”

Nassau County Executive Laura Curran, who worked with Eng when he was MTA chief operating officer in coordinating a response to the March 21 nor’easter, joined him on the Mineola visit.

“I think he’s exactly the right man for the job,” Curran said. “He’s got the people skills. He’s obviously from [an] engineering background. And he’s ready to solve the problems of the Long Island Rail Road.”

Eng called Tuesday morning’s service problems a “first test” for him, and said he already picked up valuable feedback from customers on the importance of communication. That includes providing real-time updates at every station so customers know service conditions before boarding a train, Eng said.

“They need to know sooner rather than later when something is affecting their commute,” said Eng, adding that he also heard from customers on the importance of collaborating with Amtrak, something he plans to do.

In a letter sent to Eng on Tuesday, State Sen. Todd Kaminsky (D-Long Beach), a leader for railroad reform in Albany, also highlighted the need for improved communications in the LIRR president’s office. Kaminsky wrote that Eng’s first step should be “leveling with riders and having an honest conversation about the state of the LIRR.”

“Commuters feel that your agency is distant, remote, and uncaring. They are constantly in the dark about what is happening during their commute . . . Riders feel that no one is listening and the LIRR is a faceless organization that does not take their complaints and suggestions seriously,” wrote Kaminsky, adding that he hears from constituents about the LIRR more than any other issue.

“They are rooting for you and hope you will bring a sense of urgency to the agency,” he wrote.

New LIRR president Phillip Eng is not the first to make promises upon taking office about how he’ll improve railroad service.

Here’s a look at some of what his predecessor, Patrick Nowakowski, had to say in his first days in office.

Result: He largely got good grades from Long Island elected officials and business leaders for his efforts in meeting with and listening to them in his first weeks in office.

Result: New MTA chief development officer Janno Lieber has recently criticized the LIRR for not being involved enough in the planning of East Side Access.

Result: The LIRR was involved in a number of safety-related incidents during Nowakowski’s watch, including an October 2016 derailment that injured 33 people and a Brooklyn crash in January 2017 that injured more than 100. Recently the NTSB chided the LIRR for not enforcing employee safety rules, including in a June 2017 incident in which a track worker was killed by a train.

Result: Nowakowski was widely criticized for keeping a low public profile in recent years and not collaborating with commuter advocate groups, like the LIRR Commuter Council, which he said in 2015 he didn’t “need to tell me how to run the company.”

Result: Under Nowakowski’s tenure, the LIRR rolled out a mobile app with real-time train arrival information, a new electronic mobile ticketing system, and began a program to install cameras on all trains.

Result: Using Nowakowski’s design, Gov. Andrew M. Cuomo in January 2016 proposed the construction of a third track between Floral Park and Hicksville. The plan was approved last summer and construction is expected to begin by the end of 2018.