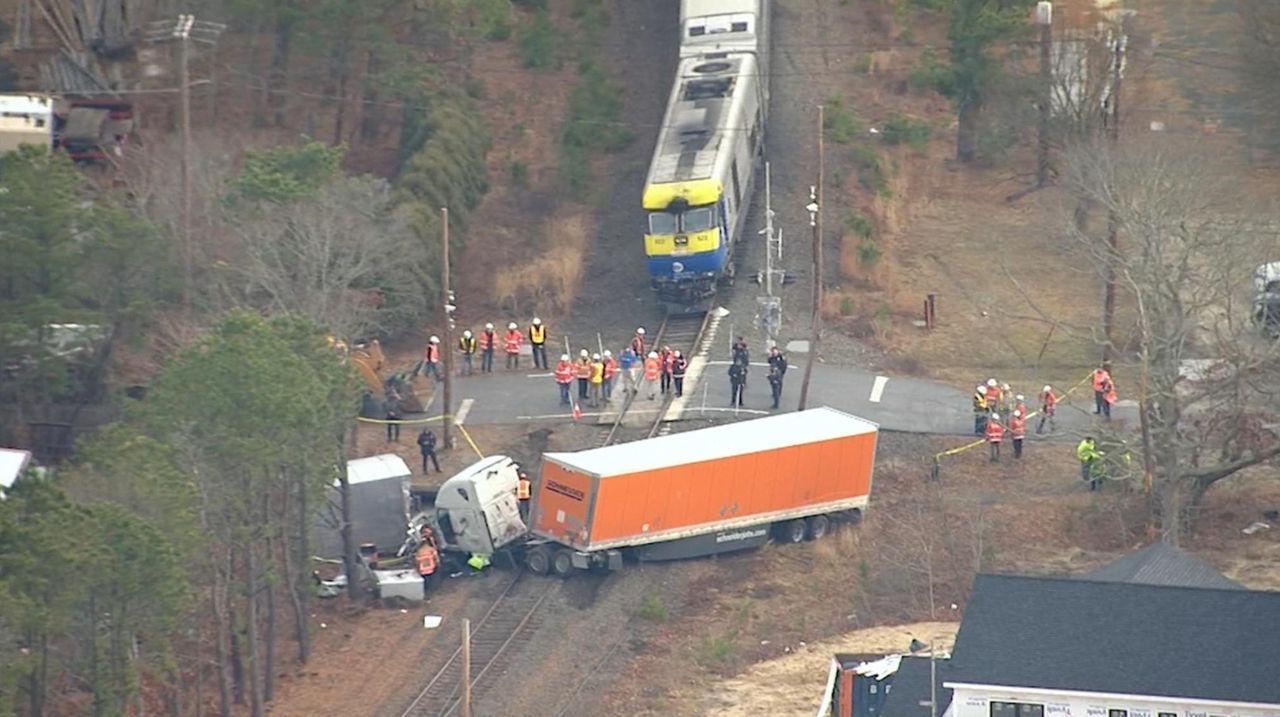 On Thursday, an LIRR train struck a tractor trailer at Old Depot Road in Quogue at 5:13 a.m. The LIRR suspended service on the Montauk Branch between Montauk and Westhampton as of just after 6 a.m.  Credit: News 12 Long Island, Randee Daddona

No one was injured, including the sole passenger. The railroad’s service between Montauk and Westhampton had not been restored by the early afternoon, but by the evening commute, the LIRR announced that trains were moving again. The railroad continued repairs on the damaged signal equipment overnight and there were delays of 15 to 20 minutes on the Montauk Branch for the next two mornings.

Quogue police officers who arrived shortly before the collision at the Old Depot Road crossing found the driver standing in the road, Quogue Chief of Police Christopher B. Isola said in a statement.

“And at that moment, the 4:41 a.m. train out of Southampton, bound for Penn Station, struck the truck,” the statement said.

The time of the driver’s call to 911 has not been released; he was issued a summons by the Quogue police for driving on a road where trucks are not allowed. A local ordinance prohibits trucks on that portion of the road.

"The crossing is closed to trailers/trucks because they can hit the crown of the grade crossing," Nancy Gamerman, a Metropolitan Transportation Authority spokeswoman, said via email.

A photograph of the scene showed the collision had pushed the white cab off to the side of the orange tractor trailer, leaving it in a tilted position. The tractor trailer's cargo was not hazardous, Isola said by telephone.

“Fortunately, there were no injuries,” the police chief said. “The lack of time from the notification [that] there was nobody injured, that’s the best-case scenario,” he said.

By the evening rush hour, the tractor trailer had been removed from the trackwhile police and the LIRR continued to investigate the accident. The railroad said its signal and crossing protection equipment were significantly damaged.

A spokesman for the tractor trailer company, Schneider, a New York Stock Exchange company based in Green Bay, Wisconsin, said by email: “We are in the process of investigating the facts.”

Isola explained that the railroad owns the crossing, and that it is the lead investigator.

Gamerman said the National Transportation Safety Board is not investigating.

Local police, he said, serve as first responders. And “under the best of circumstances, we would get involved, notify the MTA to dispatch word to the train, and the officers would illuminate the tracks with a set of flares to signal the train.”

However, in this case: “There wasn’t any time to do any of that.”

In addition, by late afternoon, the LIRR reported "a minor derailment of a non-passenger railcar in the LIRR's Jamaica storage yard." Customers could experience some delays and service changes because of "reduced access to tracks," it said.

The next day, on Friday afternoon, the Port Jefferson Branch was briefly suspended between Huntington and Port Jefferson because of police activity in Northport, the LIRR said.