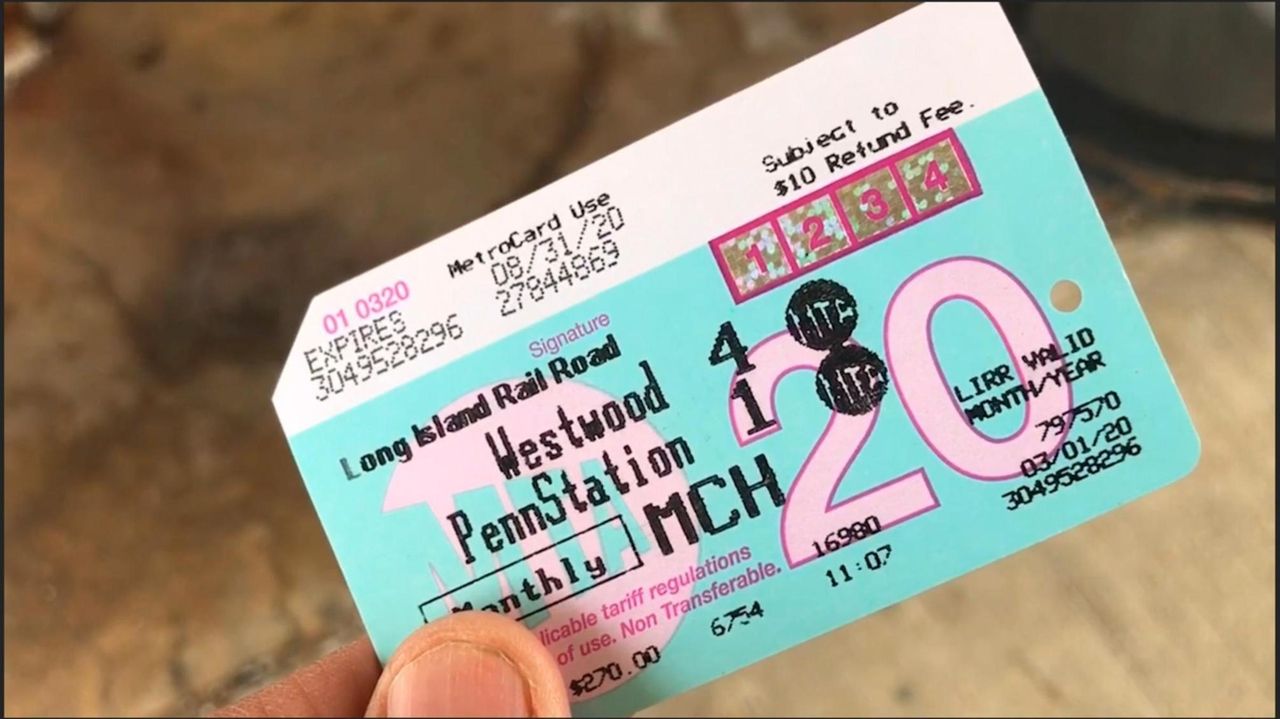 LIRR commuters who have sought refunds for their unused monthly tickets amid the coronavirus outbreak are outraged over being able to recoup only small fractions of their high fares. Newsday transportation reporter Alfonso Castillo has more on this story.   Credit: Newsday / Alfonso Castillo

LIRR commuters who have sought refunds for their unused monthly tickets amid the coronavirus outbreak are outraged over being able to recoup only small fractions of their high fares — if they were able to recoup anything at all.

Several holders of monthly Long Island Rail Road tickets, which range in cost from $197 to $500 depending on the distance traveled, were stunned to get back as little as 50 cents from the railroad after applying for prorated refunds. Many customers used their monthly March tickets for only about one week before discontinuing their regular commutes because of the coronavirus outbreak.

It "seems unfair,” said Valley Stream commuter Amy D’Arco, who applied for a refund on her $270 monthly ticket on Friday and got back $68. “It was less than half the amount, and I didn't even use the ticket for half the month.”

Gibson station commuter Damien Spellman said he applied electronically for a refund on his $270 ticket Monday and was told he'd get back $25. He hesitated in accepting the offer because he was "super confused" as to why he was getting so little.

When he checked back later that same morning, "the $25 turned into 50 cents."

"It’s not unfair; it's criminal," said Spellman, who "didn't bother" to accept the 50-cent reimbursement. "The math they want to use is silly."

Asked for a response to customers' complaints about the refunds, LIRR officials pointed to their refund policy published online. According to the policy, although monthly tickets are discounted by about 50% compared with the cost of 42 one-way tickets, “the discount is forfeited" once a ticket is turned in for a refund. The LIRR calculates refunds by deducting the cost of “One-Way and/or weekly fares for the period the ticket has been in the customer's possession.”

Using that formula, customers submitting their monthly tickets for a refund after the first two weeks of the month can expect to get back little, or nothing at all.

The LIRR said it has received about 4,900 refund requests for March monthly tickets, and it expects another 500.

Anticipating the high demand, Democratic state lawmakers last week sent a letter to the Metropolitan Transportation Authority — the LIRR’s parent — urging the agency to facilitate the process, including by waiving the standard $10 processing fee. The letter reasoned that “by eliminating this surcharge, you will be not only alleviating monetary concerns for thousands of your riders, but acting fairly and helping protect fellow New Yorkers by encouraging people to telecommute.”

“While the effects this virus will have on our economy and institutions will be far-reaching, it’s having an immediate impact on our workers now,” Kaminsky said Wednesday. “The MTA should fully reimburse commuters looking to refund tickets, and then we can look at ways to shore up its finances in a way that does not deepen this crisis.”

LIRR president Phillip Eng on Thursday defended the railroad’s handling of ticket refund requests, which he said “have been done in the fashion that we’ve always done them.”

While commuters look to get more of their fare dollars back, LIRR spokesman Aaron Donovan added that the railroad continued to run regular service, despite the “devastating” financial impact of the outbreak.

MTA officials have not addressed the calls to waive the refund fee, saying only last week that they would review the request from legislators. But the public authority has made it clear that, even without the refunds, the financial toll from the coronavirus will be staggering.

MTA chairman Patrick Foye has requested a $4 billion bailout from the federal government to help offset the expenses, which include a loss in fare revenue from huge drops in ridership — including nearly 70% on the LIRR — and added labor costs from the agency’s stepped-up cleaning and disinfecting efforts on trains and at stations.

Foye, speaking to WCBS Radio, declined to speculate about whether the unanticipated expenses could result in service cuts. But, he said, without federal government aid, the agency’s options are limited.

“There’s no way the MTA could cut costs to get out of this,” Foye said.

A consortium of eight different transportation advocacy and public policy groups from New York on Wednesday drafted a letter to federal lawmakers also urging them to come through with $4 billion in aid for the MTA.

“We recognize that there will be many requests for federal aid, but we emphasize that without a fully functioning MTA, there will be no recovery in the New York City region or New York State,” wrote the letter’s authors, which included the Permanent Citizens Advisory Committee to the MTA and the Regional Plan Association. “Public transit is the lifeblood of our City.”