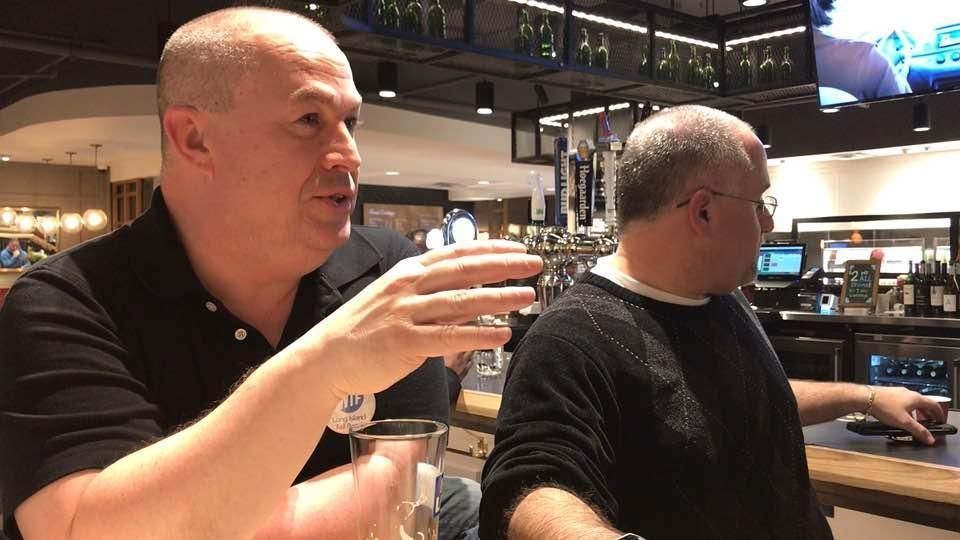 Members of the Long Island FAILroad Facebook group meet for drinks at Penn Station and share stories about their LIRR commutes on Wednesday, Jan. 17, 2018. (Credit: Newsday / Alfonso A. Castillo).

During a recent Wednesday night rush hour, a dozen or so Long Island Rail Road regulars decided to catch a later train so they could drown their commuting sorrows together at a Penn Station bar.

When the lights briefly flickered inside, Steve Johnson of Massapequa immediately quipped, “Blame Amtrak.” His comrades knowingly laughed at the joke — a reference to the finger-pointing that often goes on between the LIRR and its Penn Station landlord when service tanks.

When they’re not commiserating in person, they’re doing so online as members of Long Island FAILroad — a Facebook group bonded by what they say is the near-daily torment that comes with commuting on the LIRR. They’re not shy about telling LIRR officials what they think, and they are very much on those officials’ radar.

“You can go into third-world countries and have better transportation systems than we do,” said Scott Abel, who commutes from Merrick.

“When have they shown accountability for anything?” asked Liza Galano of Centerport.

The group began about two years ago when Michael Taub, 40, a commuter from East Northport, said he was blocked from commenting on the LIRR’s official Facebook page.

“I decided to start my own group where I’d have a voice that they couldn’t block,” said Taub, an accountant.

The closed group — meaning that members must be approved by administrators — grew to about 200 members in its first year.

Then, last spring, a string of major service disruptions at Penn Station — including those caused by three train derailments within four months there — led to Amtrak’s “summer of hell” repairs, and an increasingly frustrated, and vocal, LIRR ridership.

How winter Penn work compares to 'Summer of Hell'

Today, the group boasts nearly 1,300 participants covering all branches and zones of the railroad — a healthy sampling of the approximately 100,000 people who ride the LIRR on an average weekday morning. They populate the group’s Facebook page with rants, photos and videos documenting their daily travails.

Common posts include photos of spilled coffee on trains, of dangerously crowded conditions on platforms and of the constant LIRR service alerts on their phones — and the occasional typos within them.

When the railroad issued an alert Thursday morning about westbound delays “though Queens Village,” group member Bill O’Brien posted: “I see they use grammar as well as they run the railroad.”

LIFR members say their group serves multiple purposes, such as outing riders who offend them — including one video recorded by Johnson of a passenger stinking up a train car by “eating green peppers like you would eat an apple” — and providing real-time information on service conditions to each other that are often faster and more accurate than official LIRR communications, they said.

But, most of all, members said the group provides a forum for them to vent and feel like they are not alone.

“I think we all have a commonality,” Galano said. “We’d all complain about the Long Island Rail Road on our pages. And our friends just got tired of listening to our stories.”

Through their commiseration, bonds have been formed. Galano was the first to get “Long Island Failroad” buttons made to distribute to fellow members and other commuters. Tote bags soon followed. Before long, virtual conversations became real ones as members began meeting regularly for drinks at Penn Station.

“I think we all feel each other’s pain,” said Abel of East Meadow, sitting at the group’s usual gathering spot, the bar inside the Pret A Manger near Penn’s 34th Street entrance.

“We’re not going to stop,” he said. “We’re not just going to roll over and say, ‘Yes, sir. May I have another?’ We’re going to continue to be a thorn in their side until somebody wakes up and says, ‘Hey, enough is enough.’ ”

And the LIRR says it’s listening — or at least trying to. Railroad spokesman Aaron Donovan said the LIRR is aware of the group, but because it is closed to the public, they can’t monitor posts or make any adjustments to service or communications based on what members say. The group prohibits any Metropolitan Transportation Authority employees from joining.

Donovan said the LIRR generally monitors social media and tries to interact with commuters as much as possible. MTA board member Mitchell Pally of Stony Brook encouraged the group’s members to continue speaking up.

“It’s always appropriate. It always gets attention from the MTA and will always do so,” Pally said. “Obviously, one understands their frustrations. We’re as frustrated as they are. . . . The more customers tell us what is good or bad, the better it is.”

Some Long Island FAILroad group members have already gone to some extreme lengths to make sure their voices are heard. In July, group moderator Meredith Jacobs and member Paul Liggieri, a Manhattan attorney, filed a class-action lawsuit seeking unspecified damages because of dangerous overcrowding caused by LIRR service disruptions. LIRR officials have said they cannot comment on pending litigation.