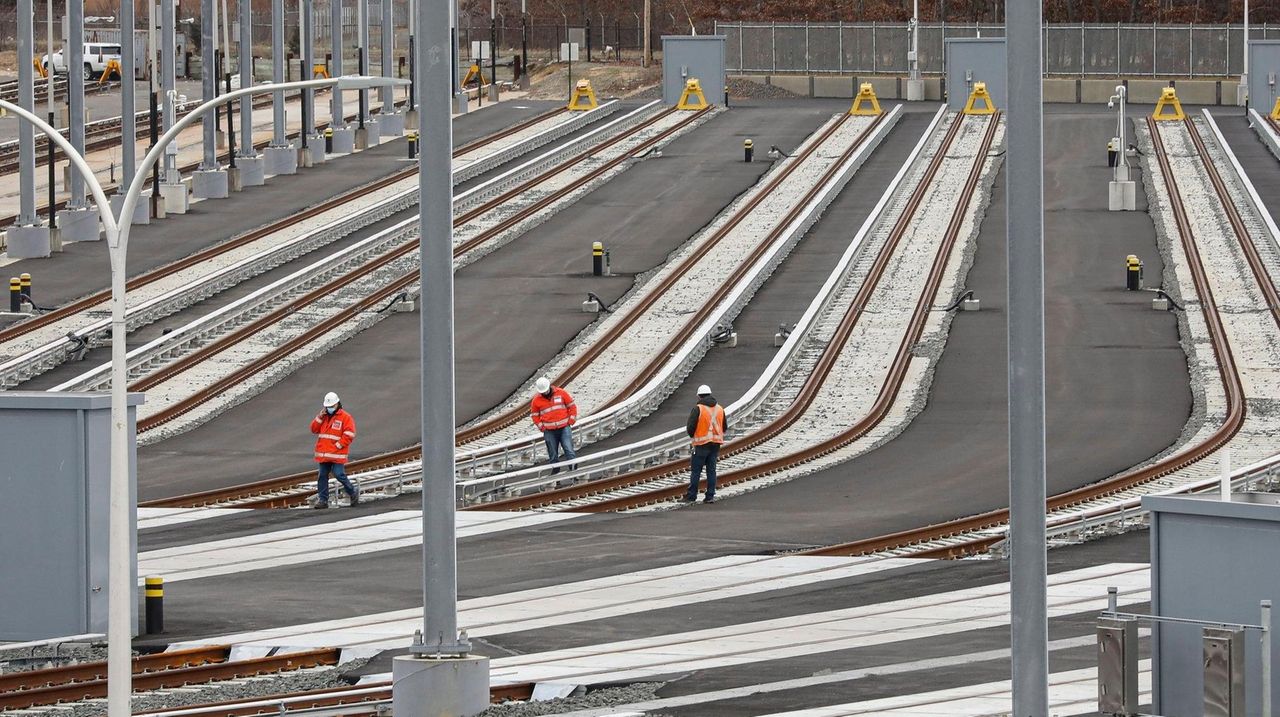 The recent expansion of a Ronkonkoma rail yard will allow the LIRR to increase morning rush-hour service on its Main Line by 50%, but it could be years before the struggling railroad has enough riders to get full use of the added capacity, officials said.

In late November, the Long Island Rail Road finished construction on its $136 million Mid-Suffolk Yard, which replaces a train storage facility near its Ronkonkoma Station. The yard includes a southward expansion, just north of Railroad Avenue, on what was previously wooded land belonging to the Town of Islip's Long Island MacArthur Airport complex.

The project, which was funded in the Metropolitan Transportation Authority’s 2015-19 Capital Program and began construction late in 2017, features 22 storage tracks — each capable of fitting a 12-car train set.

The facility doubles the train capacity of the LIRR’s former Ronkonkoma Yard, and, combined with other recently completed and ongoing capacity-expansion projects — including a second track on the Main Line in Suffolk and a third track in Nassau — is expected to allow the railroad to significantly increase train service on Long Island after completion of the East Side Access project. That project aims to add a direct link to Grand Central Terminal by 2023.

"It’s probably not the most sexy component of what we’re doing, but it’s a key part of improving service in the future," LIRR president Phillip Eng said. "You can improve infrastructure, you can improve track capacity, but if you don’t have the improvements in your yard space, you don’t get the full benefit of what you’re doing."

But the move to grow the railroad’s capacity comes as demand remains at record lows because of the COVID-19 pandemic, and as the railroad plans to further reduce service. The LIRR, now carrying about 25% of its usual riders, has been running at about 90% of its pre-pandemic schedule, and plans to cut service by another 10% to 15% this month.

The railroad’s parent organization, the MTA, has predicted that it won’t return to 90% of its pre-pandemic ridership until 2024.

Gerard Bringmann, chairman of the LIRR Commuter Council, said the diminished need for additional capacity on the LIRR is apparent at the new Mid-Suffolk Yard on early weekday mornings, when yards are typically filled with trains staged for the morning rush hour.

"It’s all empty. The additional 11 tracks — there’s nothing there … It’s like being all dressed up, and [having] no place to go," said Bringmann, who nevertheless believes the expansion was a worthwhile investment. "It may take a few years, maybe several years — who knows? — to get back to where we were. But, when they planned all this stuff, it was the right thing to do. They were planning ahead. This COVID thing just came out of nowhere."

Eng said he's confident the railroad's ridership eventually will recover and that the expansion will yield other benefits in operational efficiency and flexibility. Currently, the LIRR often has to "dead head" — or run trains without passengers — from yards in New York City east to Ronkonkoma in order to have them in place for westbound runs.

The added storage tracks will make it easier for crews to maintain, inspect, repair and clean the LIRR’s growing fleet and to more quickly rebound from train breakdowns that cause rippling delays throughout the system.

The full benefit of the new yard isn’t expected to be realized until the opening of East Side Access, when the railroad said it will boost morning rush hour service by 50%. But some riders remain unsold on the need for the additional capacity, and worry that it will result only in added operational costs passed on to riders.

"They will need more trains and more personnel to man the trains, but there probably won’t be a 50% increase in ridership," said Ronkonkoma commuter Lynn Larrison, who has been riding the LIRR for two decades, and currently pays $405 for her monthly ticket. "All they are doing is redistributing riders."

Even without a second Manhattan terminal, LIRR passengers already were in need of breathing room, said Kevin Sexton, general chairman of the Brotherhood of Locomotive Engineers and Trainmen Division 269, the union representing 500 train operators.

Beyond comfort, Sexton said the intense crowding on rush hour trains before the pandemic created safety issues for passengers and employees that would be addressed with more trains, and a yard in which to store them.

"It’s about planning beyond COVID," Sexton said. "And, beyond COVID, there’s certainly going to be a need for this service."