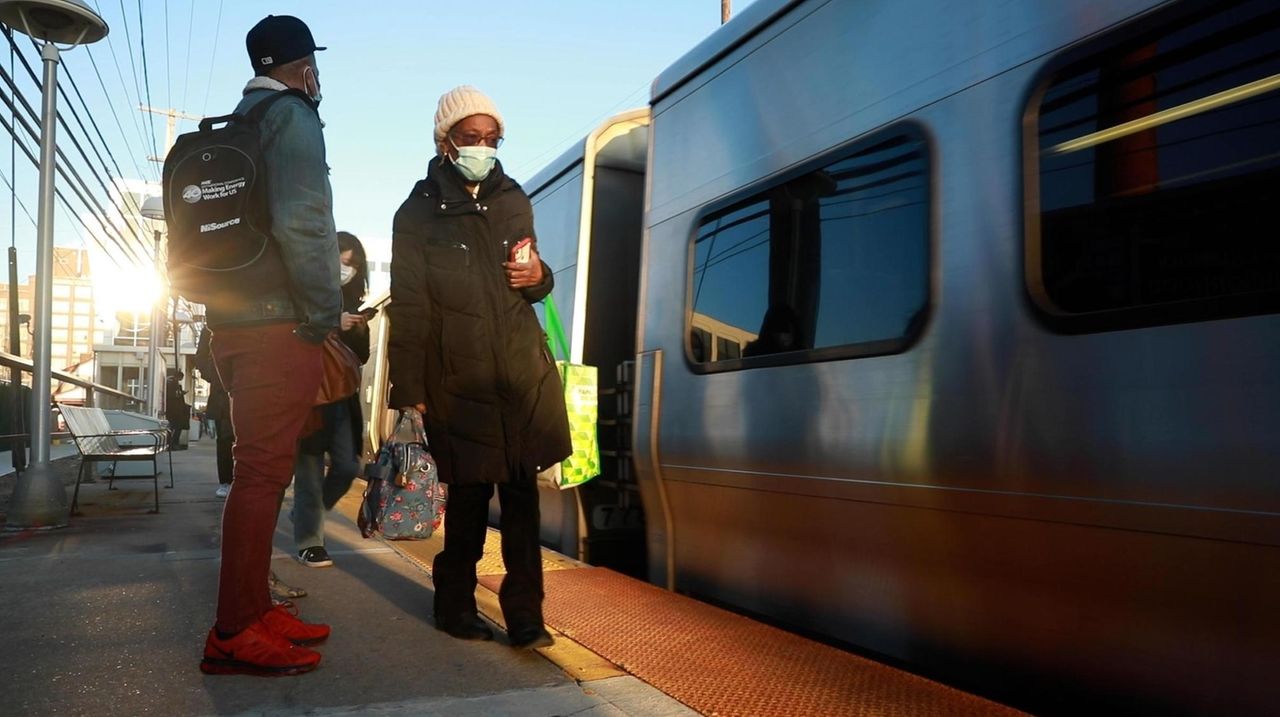 While some Long Island Rail Road customers were unaffected by the service changes that began Monday, many said they were upset by the scaled-back schedule and overcrowded train cars. Credit: Newsday / Reece T. Williams; Jeff Bachner

The Long Island Rail Road pledged to boost capacity on trains starting Tuesday after scores of livid and pandemic-wary commuters excoriated the railroad Monday for what many described as unsafe crowding on Day One of a reduced service plan.

To address overcrowding, which continued during the Monday evening commute, the LIRR said it is adding a 4:50 a.m. train out of Ronkonkoma on Tuesday, along with a Babylon morning train, and a boost in the number of cars on a Long Beach morning train. The railroad made the cuts, in part, to help offset financial losses during the pandemic. The change brought weekday service to near-weekend levels.

On Monday the railroad, poised to benefit from $6.5 billion in the next round of federal aid, added an afternoon eastbound Ronkonkoma train, but it was far from enough to help evening commuters crowded into Penn Station waiting to board packed cars, where social distancing was impossible.

"This is horrendous," one rider said as he saw passengers pouring into the 4:55 p.m. train to Babylon.

"Going to get everybody sick," muttered another.

Commuter complaints along with those from labor leaders and elected officials flooded social media — and Newsday’s email inbox — Monday morning and continued into the night. Elected leaders called for the railroad to reconsider the plan while riders lamented the lack of personal space.

"People are literally inches apart, especially getting off the trains and on the train," said David Skudin, whose Long Beach branch went from two or three trains an hour during the morning peak to just one.

"If you look at the state Department of Health guidelines for COVID, there’s no way that you can follow those guidelines and ride the Long Island Rail Road now," Skudin, 63, said in a phone interview.

The U.S. Senate on Saturday approved the latest pandemic-relief funding bill that is expected to pass in the House. The $6.5 million for the Metropolitan Transportation Authority follows an earlier $8 billion federal infusion of federal aid — enough to offset revenue losses in 2020 and 2021.

"I have 14.5 billion reasons the LIRR service cuts make no sense," Senate Majority Leader Chuck Schumer (D-N.Y.) said at an unrelated news conference Monday in Babylon. "So the MTA needs to go back, look at their decision, knowing … there’s billions more in federal relief that are in transit to the MTA."

Despite the railroad’s pivoting to address crowding complaints, LIRR president Phillip Eng said he was not caught off guard Monday. He described the crowded trains Monday morning "an isolated few" and said that 77% of morning trains were at less than 50% capacity.

Eng said some Monday morning trains had 90 riders in one car, while others carried as few as 10. He added that more than 95% of morning trains ran on time.

But Eng acknowledged that commuters’ perception of crowding has changed since before the pandemic, as riders have become accustomed to having plenty of space in vehicles.

He noted that trains are sanitized daily, the ventilation systems keep fresh air flowing, and riders can monitor real-time crowding conditions on every car by using the LIRR Train Time app.

Citing reduced ridership throughout the pandemic, and the opportunity to accelerate infrastructure work on its tracks, the Monday service cuts amounted to about 75% of where the LIRR was pre-pandemic. Railroad officials noted that service had already been cut by about 20% during the pandemic and the schedule changes will allow the LIRR to save $15 million in operating costs.

But ahead of the changes, union officials, politicians and riders urged the railroad to rethink their plans, concerned, in part, that the reduced number of trains would make it more difficult for passengers to maintain a safe social distance.

In a letter sent Monday to Eng and MTA Chairman Patrick Foye, the heads of nine separate LIRR unions joined more than 3,000 railroad employees in decrying the cuts, which they say have "disgusted" workers and "destroyed our morale and trust in the agency." Following the morning rush, Anthony Simon, who heads the LIRR’s largest union, called on the railroad to "restore service immediately."

"It is an absolute mess out there, like we warned them," Simon said.

State Sen. Todd Kaminsky (D-Long Beach) also received several photos and emails from upset riders Monday morning. On Twitter, he told them: "I see & hear you … We must return to the old schedule and get everyone back to work safely."

Nassau County Executive Laura Curran, in a statement, also pushed the railroad to undo its cuts and said, as the region's economy continues its recovery, "We need more — not less LIRR service."

Suffolk County Executive Steve Bellone, in his own statement, said that the MTA has transported essential workers throughout the pandemic and "should not give up on us now."

When the crowding conditions continued into the evening rush hour, Suozzi called the LIRR's response "totally inadequate" and "tone deaf."

Following the criticism, Eng released a statement Monday pledging to "continue to monitor ridership and make adjustments as necessary whether that is lengthening trains or adding additional service."

Foye, speaking to WCBS/880 AM radio on Monday morning, defended the decision to scale back service on the LIRR, where weekday ridership remains at less than 25% of pre-pandemic levels, but also signaled that there would be no further cuts.

"We're going to monitor that closely, but the next service adjustments on Long Island Rail Road … will be increases in service," Foye said.

That's "assuming ridership comes back, which we are confident it will," Foye said. "It's just a question of when."

But that might not be a sure bet if the latest service reductions prompt riders like J.R. Wales to seek out alternatives to the train.

"I've honestly never considered driving into the city," said Wales, a decadelong LIRR commuter from Medford. "Until this morning."

Wales attributed his change in thinking to the slimmed-down timetable, the extra local stops, and the packed train he rode into Manhattan on Monday.

"I've never seen the trains this crowded before," he said. "It was absolutely insane."