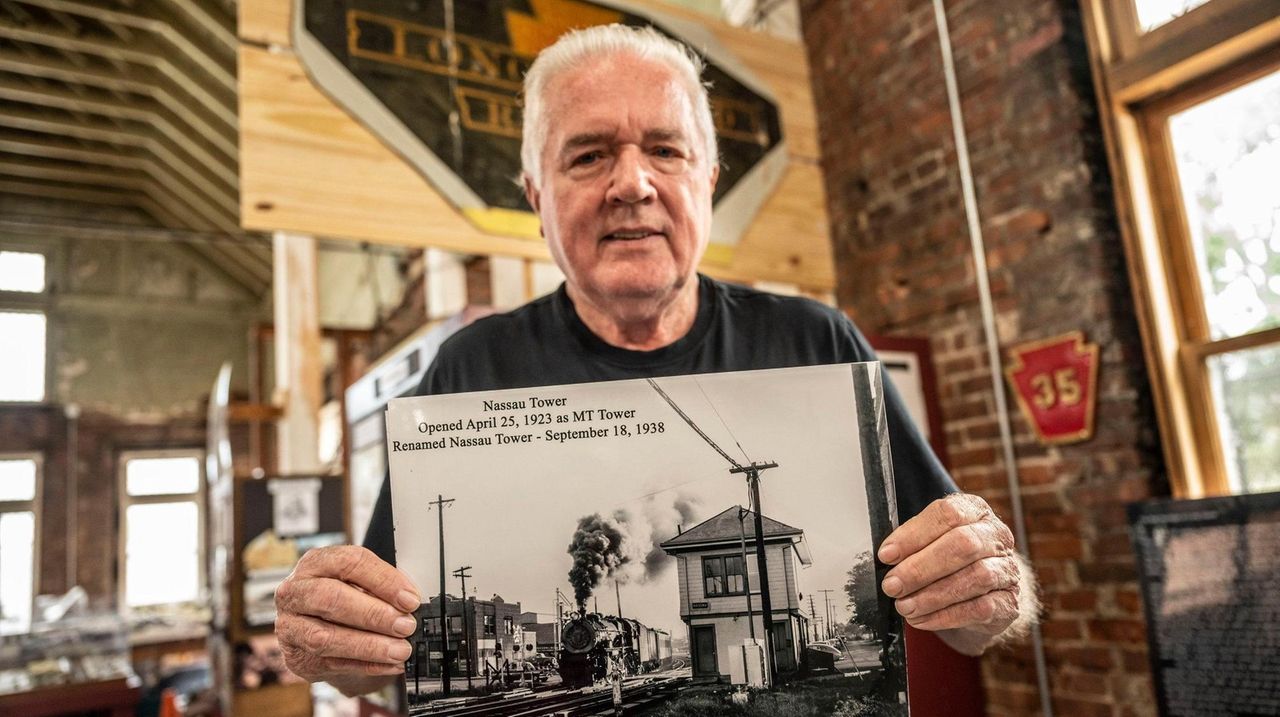 Built in 1923, The tower was deemed, literally, in the way of progress. It stood in the path of the 10-mile-long Third Track that is being built between Floral Park and Hicksville. Credit: Kendall Rodriguez/ Gary Farkash

When the century-old Nassau Tower was reduced to a pile of rubble last month, it marked the end of one chapter in LIRR history — and the beginning of another.

The tower was deemed, literally, in the way of progress. Its location in Mineola, on Main Street and Station Road, just south of the tracks, put it in the path of the 10-mile-long Third Track that is being built between Floral Park and Hicksville. The tower had stood since 1923.

Because the tower, and an adjacent electrical substation, were both eligible to be registered as National Historic Landmarks, the Long Island Rail Road was required, under state environmental law, to make some effort to preserve the structures’ history, including by archiving photos and architectural plans.

"It’s a piece of history that we worked hard to preserve," LIRR president Phillip Eng said of the tower. "And at the same time, we’re looking to create new history."

For nearly a century inside the two-story, wood frame building, LIRR block operators controlled the complex configuration of switches and signals at the interlocking connecting the railroad's Main Line to its Oyster Bay branch. Originally, they maneuvered tall levers connected to rods that extended to the tracks. In more recent years, a more modern microprocessor-based system was used.

It wasn't the first time an LIRR signal tower had been knocked down in Mineola.

On New Year's Eve, 1922, a freight train derailed and crashed into the "MT Tower" next to the tracks, causing it to collapse. The railroad scurried to replace the building, and, four months later, the newly built Nassau Tower opened.

"And that’s the tower that was there until a few weeks ago," said David Morrison, a railroad historian and former LIRR branch manager.

Leslie Mesnick, community outreach manager for the LIRR’s Third Track project, said the railroad "went above and beyond" — working for months alongside rail historians — to salvage some of the dilapidated building's legacy.

Several historical groups were eager to claim pieces of the tower’s history. The Long Island Sunrise Trail of the National Railway Historic Society hosted a gathering of its members near the tower in 2019, and later worked with the LIRR to record a short documentary video about the tower’s history.

The New York Transit Museum — owned by the LIRR’s parent organization, the Metropolitan Transportation Authority — kept several metal signs that hung on the tower, and its switch control board. Seven hundred bricks went to the Mineola Historical Society.

Preserving the artifact coveted by the Oyster Bay Railroad Museum would prove a little more difficult. Museum historians had their eyes on a mural painted on the north wall inside the tower, bearing the logo of the LIRR’s "Sunrise Special" — a first-class express train to Montauk that operated on summer weekends during the first half of the 20th century.

"It was a very important piece of Long Island Rail Road history for us," said Gary Farkash, a volunteer with the Oyster Bay Railroad Museum. Farkash has been working to restore a train car used on the "Sunrise Special."

Project workers carefully cut out the section of the Sheetrock wall containing the mural and got it to Farkash, who mounted it on a wooden panel that now hangs in the museum — the former ticket office of the original Oyster Bay LIRR station.

"We know that a lot of people who love Long Island Rail Road history are very intrigued with [the Nassau Tower]," Farkash said. "We know that because when they come here, that’s one of the first things [they say]: ‘I understand you’ve got something from the Nassau Tower. Where is it?’ "

With the mementos in the historians’ possession, and the LIRR in February completing the migration of the tower’s signal and switching functions to a modern central control room in Jamaica, all that was left was to say goodbye to the Nassau Tower. On the morning of Sept. 18, spectators began gathering at dawn, from a safe distance.

"It didn’t come down easily," Farkash said. "It gave a little bit of a fight."

Eng acknowledged the "bittersweet end to the tower," but noted that the Third Track project aims to improve LIRR service and help Long Island’s economy rebound from the COVID-19 pandemic.

Formally known as the LIRR Expansion Project, the $2.6 billion effort to construct a 9.8-mile third track on the LIRR's Main Line is scheduled for completion by the end of 2022. Project officials say the added capacity will reduce delays and support "reverse commuters" traveling to and from jobs on Long Island.

The 98-year-old Nassau Tower, in which rail workers controlled Mineola’s switch and signal system for decades, was demolished on Sept. 18 to make room for the Long Island Rail Road’s Third Track.

Because the tower, and an adjacent electrical substation, were both eligible to be registered as National Historic Landmarks, the LIRR was required by law to make an effort to preserve its history.

In addition to archiving photographs and plans for the tower, the LIRR worked with several historical preservation groups to salvage various artifacts from the building, including signs, a switch control panel, bricks, and a painted mural that is now on display at the Oyster Bay Railroad Museum.