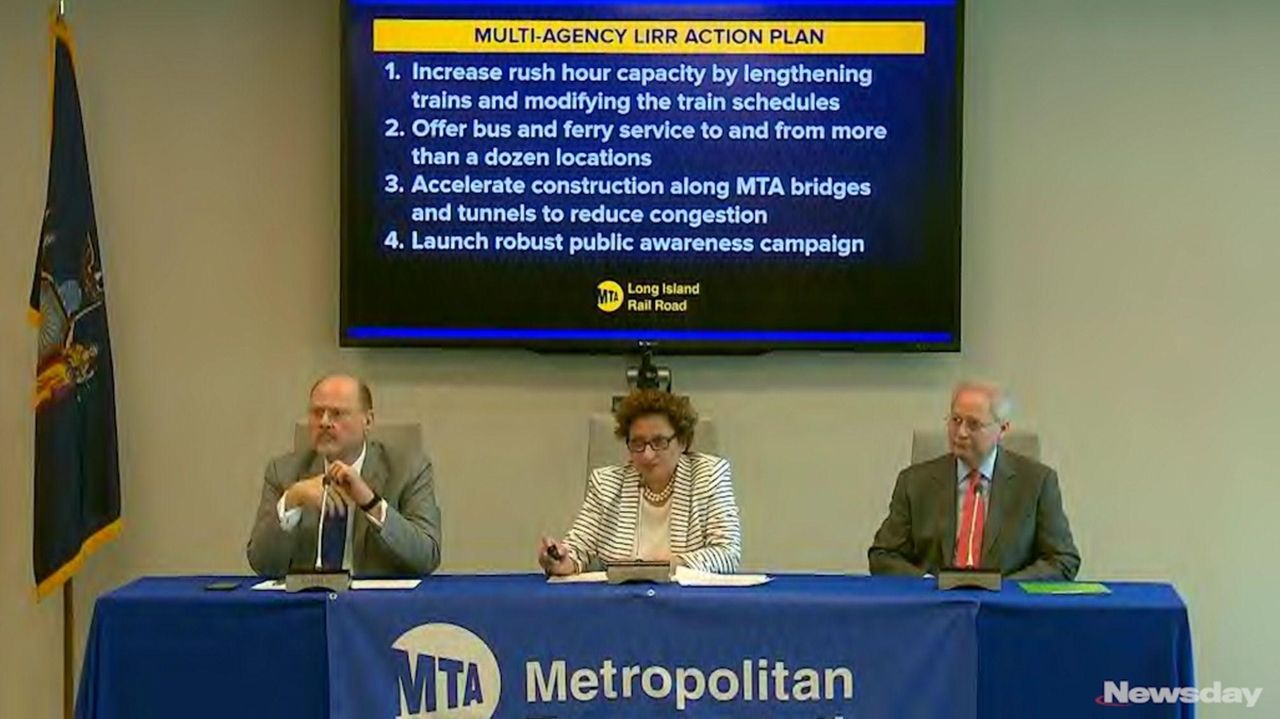 While the LIRR will reduce service for eight weeks dubbed by Gov. Andrew M. Cuomo as “the summer of hell,” the railroad has no plans to cut fares for the 9,600 affected commuters — including some who will ride buses from as far as Melville — to get to work each morning.

“Obviously, it’s going to be a long, hot summer,” said Metropolitan Transportation Authority interim executive director Veronique Hakim at a lower Manhattan news conference. “We’re all in it together. The idea of this service plan is to be as responsive to our customers’ needs as possible.”

The “multiagency action plan” revealed Monday comes less than a month before extensive track work is set to begin at the nation’s busiest rail hub, which has been plagued recently by frequent disruptions blamed on its aging and neglected infrastructure.

The plan aims to provide the same number of LIRR train seats for the railroad’s 88,000 daily commuters who travel to and from Penn Station as are offered now. The plan would add trains at the “shoulders” of the peak traveling period — just before and just after the height of the morning and evening rush hours — and lengthen existing trains with a total of 36 additional cars.

The bus and ferry service envisioned under the plan would provide greater capacity and other transit alternatives for LIRR commuters. The plan also calls for the MTA to urge major firms to offer employees options for work hours and work sites.

Adding the three morning trains to Penn to the schedule will mean canceling three overnight trains to and from Penn from 2 a.m. to 4 a.m. Buses will be provided for the 91 impacted riders, MTA officials said.

Several other trains will remain on the schedule, but terminate or originate at stations other than Penn. The MTA’s subway system will provide free transfers for LIRR customers at those stations, including Jamaica, Atlantic Terminal in Brooklyn and Hunterspoint Avenue in Queens. MTA officials said they will bolster subway service at those stations to accommodate the expected new riders.

Hakim said that between the diversions, the added trains and the extra cars, the LIRR will create enough capacity on its trains to accommodate every affected rider. However, the MTA will also provide riders additional options, including 200 coach buses traveling among eight designated locations on Long Island and three sites in Manhattan, including near Penn Station.

The buses will travel in the Long Island Expressway’s high-occupancy vehicle lanes. To help reduce traffic congestion, Cuomo said Monday he has ordered the acceleration of several construction projects underway at MTA bridges and tunnels so they will be completed before the service disruptions begin July 10.

Commuters could also be able to take advantage, at no additional cost, of a new ferry service between Glen Cove and the East 34th Street pier and existing New York City ferry service at Long Island City. The MTA is working on setting up one additional ferry route to serve South Shore commuters as well.

MTA officials said they will embark on a “comprehensive communications strategy” that will include social media campaigns, additional customer representatives on trains and at stations, and even letters to major employers “encouraging flexible work hours and locations.” Hakim said the authority’s website, mta.info, will be a “one-stop shop” for all information.

What LIRR riders need to know about Penn Station work

The plan was widely praised by members of Cuomo’s specially empaneled “Penn Station Task Force,” which includes the county executives of Nassau and Suffolk, who both attended the news conference. Task force member and former MTA chief Joseph Lhota called it a “robust plan that will alleviate and mitigate many of the problems that are being caused by Amtrak.”

Others said the plan fell short by reducing trains, while not reducing the cost of riding them. NJ Transit, which is also being forced to scale back service into and out of Penn during the summer months, has announced plans to cut fares by as much as 64 percent for impacted riders. Asked why the MTA decided not to give its riders a break, Hakim said the agency chose instead to focus on providing them as many transportation options as possible.

“That is outrageous,” said Mark Epstein, chairman of the LIRR Commuter Council, which, he said, was not given any input on the plan. “If you’re going to take a bus from Long Island to the city and pay the same amount on your monthly ticket as a train, that seems wrong.”

On social media, LIRR riders expressed outrage that the plan does not include a summer fare reduction.

Nick Blyumberg @nblyumberg tweeted, “#LIRR another day of delays and not even a fare reduction? Send everyone a metro card at least. My monthly [contract] is being breached.”

Referring to the MTA news conference, Liz Reed @64Reed tweeted, “I watched what a complete joke and no fare adjustments.”

Cuomo’s office did not respond to a request for comment about the MTA declining to reduce fares for commuters, whose monthly tickets range in cost from $190 to $500.

Sen. Elaine Phillips (R-Manhasset), who has pushed for an Amtrak-subsidized temporary fare rollback for commuters, said that while she was glad to see the LIRR provide transportation alternatives during the Penn work, “riders also deserve a fare cut. . . . The MTA must continue working to make that happen.”

Hakim said MTA officials are “exploring all our options” on how to pay for the plan — the cost of which has not been calculated yet.

“I know who’s not going to pay for it, and that’s the Long Island Rail Road customers,” Hakim said.

The infrastructure renewal work planned by Amtrak, which owns and operates Penn, follows a string of major service disruptions originating at the aging station that serves more than 600,000 riders daily. The disruptions from the repairs are expected to last from July 10 until Sept. 1.

After the release of the LIRR service plan, Sen. Todd Kaminsky (D-Long Beach) noted that Amtrak’s work will focus on “one narrow part of Penn Station” that is not typically used by the LIRR, while not addressing the Sandy-damaged East River tunnels “or any of the other track areas that break down not infrequently.”

“While MTA’s improvisations may help to ease commuters’ pain this summer, we are far from being out of the woods,” Kaminsky said.

New area code to come to Nassau, state PSC says
NY pols call for quick dredging of 'dangerously shallow' Jones Inlet
A community comes together to 'put food in the fridge that people will actually eat'
How much state aid could your school district get?
State Senate confirms Janno Lieber as MTA chairman
Barge off Long Beach surveys best route for wind-powered cable
Didn’t find what you were looking for?