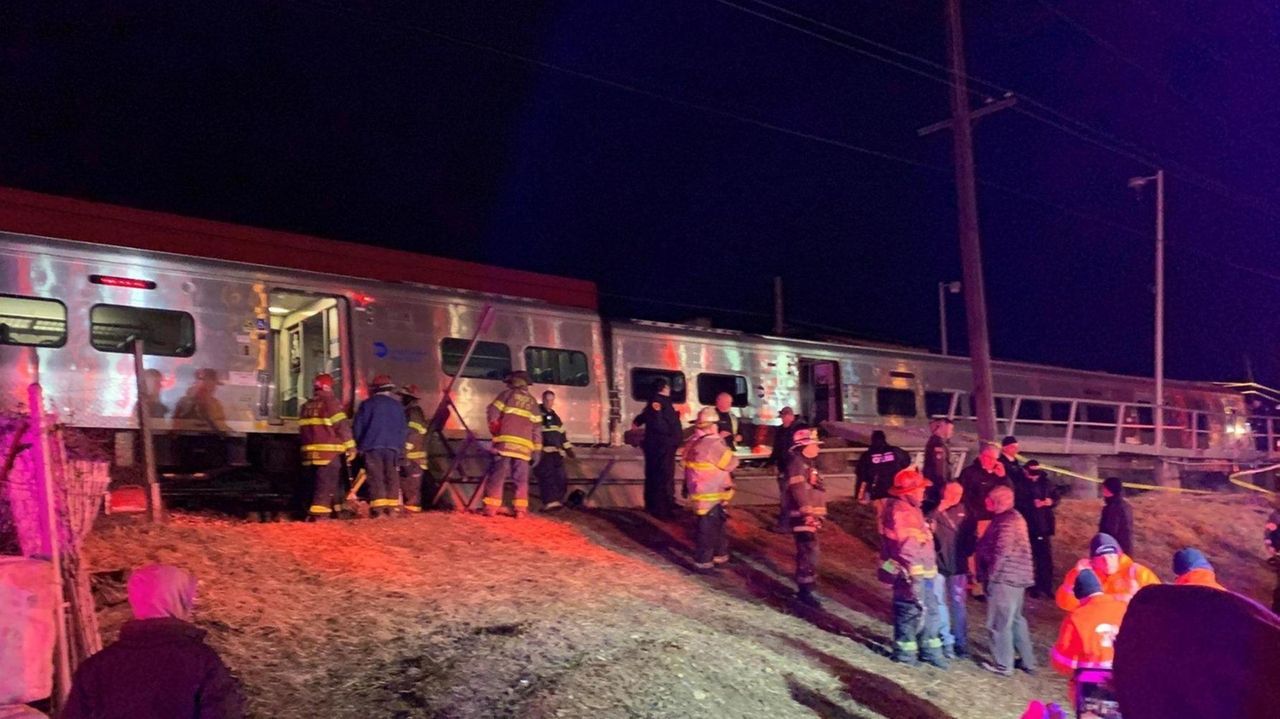 Three people were killed Tuesday when the vehicle they were in was struck by two Long Island Rail Road trains near the Westbury station, police said. Credit: Newsday / Craig Schneider; News 12 Long Island

The vehicle was hit by the eastbound train, then pushed into the path of the westbound train, before it was crushed, torn into pieces and wedged between both. Authorities couldn't identify the victims or the type of vehicle.

After the collision, the westbound train from Ronkonkoma, filled with about 200 passengers, traveled half a mile and crashed into the concrete platform at the Westbury station about 7:20 p.m., sending chunks of concrete flying. The eastbound train had about 800 passengers, officials said.

One chunk smashed into the train's first car, which held the conductor. It then came through the train and actually "chased" him, sending him running, said Nassau Police Commissioner Patrick Ryder.

At the scene of fatal #LIRR accident, where a train hit a vehicle at a crossing, killing 3, crashing into the Westbury station platform and derailing. ⁦@Newsday⁩ pic.twitter.com/SV2QPwpwOO

Passengers screamed and mothers quieted their children as flames from the crash erupted just outside the windows on one side of the westbound train, passengers said.

“I was sitting on the left side and all of a sudden the train really started rocking hard. Flames flared up on my side," said April Frazier, 31, of Brooklyn, who was on the westbound train. "I heard the conductor yell ‘Brake, brake!’ That’s when I saw the flames. That’s when it got real. I’m still shaken up. You don’t know. You think you might die. I’m thinking to myself ‘It might be my last day.’ ”

Frazier said everything went quiet after that for a couple minutes, and a conductor, on the phone, ran through the car.

Gov. Andrew M. Cuomo called for a probe, including by the National Transportation Safety Board.

"As we continue to gather information surrounding the incident, my heart goes out to the victims and their loved ones,” Cuomo said in a statement. “In the wake of this tragedy, I am calling for a full investigation into the collision, including with the complete cooperation of the MTA, State Police, local law enforcement and the NTSB."

LIRR president Phillip Eng, at the scene Tuesday night, said 200 feet of track will need to be replaced and crews will work into Wednesday morning but commuters should expect delays. Service was suspended in both directions of the Ronkonkoma and Port Jefferson branches, LIRR officials said.

Ryder said the westbound train was going "full speed" when it hit the vehicle at the intersection of School Street, just east of the station, and then derailed.

Eng confirmed the crossing gates were down and "the lights were flashing” at the time of the crash.

He said those who try and beat crossing gates “take their life into their hands and the lives of others in their hands.”

Hundreds of first responders, from firefighters to police officers to MTA police and medics, raced to the scene.

Emergency workers put a ladder up to the westbound train and evacuated passengers onto the rail bed, including a mother with two small children.

Kiara Jackson said she was on the westbound train when she heard the sound of metal dragging along the concrete platform, felt an abrupt halt — and then saw a burst of flames.

“I knew that something was wrong — we were in a panic,” she said, her two young daughters by her side. “There was a screech and then there was a thud. They told us to walk westerly and there were two small fires. Smoke was kind of coming in so they told us to just keep walking.”

Yuri Cruz, 32, of Bay Shore, a dispatcher for Universal Taxi who was working in the office across the street from the LIRR station at the time of the crash, said, “I was sitting down and I heard a big explosion. It was big like an earthquake.”

Cruz said she then looked out the taxi business’ window and saw that a train had stopped.

“I heard people screaming,” she said. “A few minutes later, I heard all the cops and ambulances coming. It was crazy.”

The collision came hours after a westbound train fatally struck a man on the tracks Tuesday afternoon between the Baldwin and Freeport stations, the Long Island Rail Road said. Service was restored in both directions by 5:45 p.m., the LIRR said.

Westbury Mayor Peter Cavallaro said the location is by a grade crossing that will be eliminated by the railroad's third-track project. There have been six fatal crashes at grade crossing on the LIRR Main Line corridor between 2007 to 2017.

The School Street crossing is among several along a 10-mile corridor between Floral Park and Hicksville where construction of a  $2.6 billion third track began in September.

Officials have said it has the potential to be the largest public works project on Long Island in decades.

Unlike past proposals, the new effort also includes the elimination of seven grade crossings, which project officials say will reduce traffic accidents, congestion and noise. Sound-attenuating walls, nearly 2,500 new parking spots, and station improvements are also part of the plan.

Two Newsday employees on the westbound train said it hit two bumps just after 7:15 p.m., then flames burst on one side of the car windows as the train ground to a halt just before the Westbury station.

It got hot inside the train car, said Newsday copy editor Nirmal Mitra, but the train kept going for about two minutes after passing the flames.

Correction: The westbound train involved in the collision had about 200 passengers. An earlier version of this story gave an incorrect number.

How is the LIRR crash affecting your commute? Cops: Vehicle in wreck was fleeing other crashThe driver of a vehicle that caused a horrific Long Island Rail Road crash, killing all three occupants, had fled the scene of a car crash moments before attempting to go around a railroad gate in Westbury and colliding with two trains, a witness told law enforcement at the scene. LIRR: Limited service on branches affected by crashLong Island commuters could face more delays, canceled trains and uncertainty Thursday as crews continue efforts to make repairs and remove two trains involved in a fatal crash with a vehicle in Westbury.