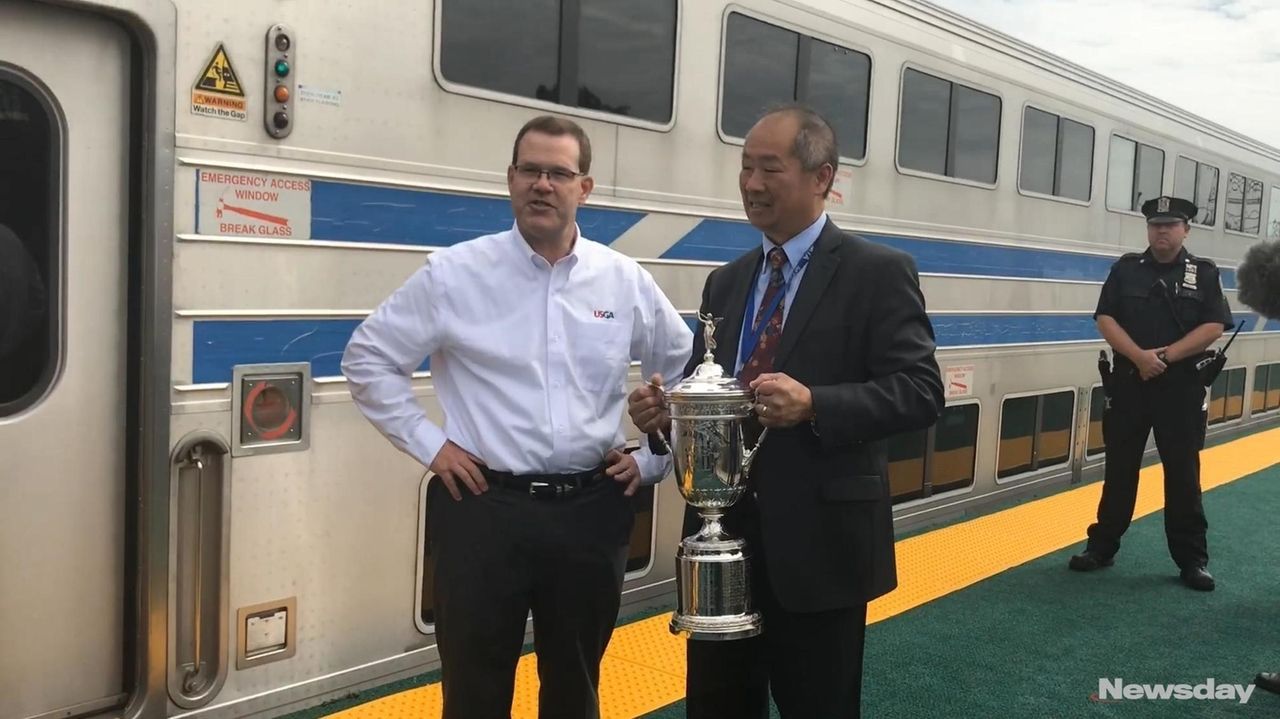 To mark the opening of a temporary train platform at the Shinnecock Hills Golf Club in Southamptonon Thursday, LIRR president Phillip Eng delivered the official U.S. Open golf tournament trophy, by train, to event managing director Reginald Jones at the station, which will be used to transport people to next week's tournament. Credit: Newsday / Alfonso Castillo

Golf fans heading to next week’s U.S. Open tournament in Southampton will be able to do so via a new Long Island Rail Road station.

United States Golf Association and LIRR officials on Thursday officially opened a temporary train platform at the Shinnecock Hills Golf Club that will be used to transport people to and from the tournament, which will run from Monday through June 17.

To mark the opening of the station, LIRR president Phillip Eng delivered the official tournament trophy, by train, to U.S. Open managing director Reginald Jones at the station Thursday morning.

“It’s the best way for the trophy to arrive at our championship — just like our fans will be coming next week,” Jones said. “For many of our fans, taking the train is going to be the fastest and easiest way to literally get within steps of the U.S. Open.”

The station, funded and built by the USGA using private contractors, is on State Route 27 near Tuckahoe Road, just across the street from the Shinnecock Hills Golf Club. It features a 10-car-long platform built on steel scaffolding and covered with green turf carpeting. The station includes stairs and a handicapped-accessible ramp.

LIRR officials said they expect the railroad to carry 9,000 people a day to and from the tournament.

“We know, with our support in being able to provide mass transit options, it’s the best way to attend this worldwide event that is going to be phenomenal,” Eng said.

The LIRR is adding the Shinnecock Hills stop to its regularly scheduled Montauk branch trips, and also adding extra service to and from the course throughout the tournament.

A one-way ticket from Penn Station to Shinnecock Hills costs $21.25.