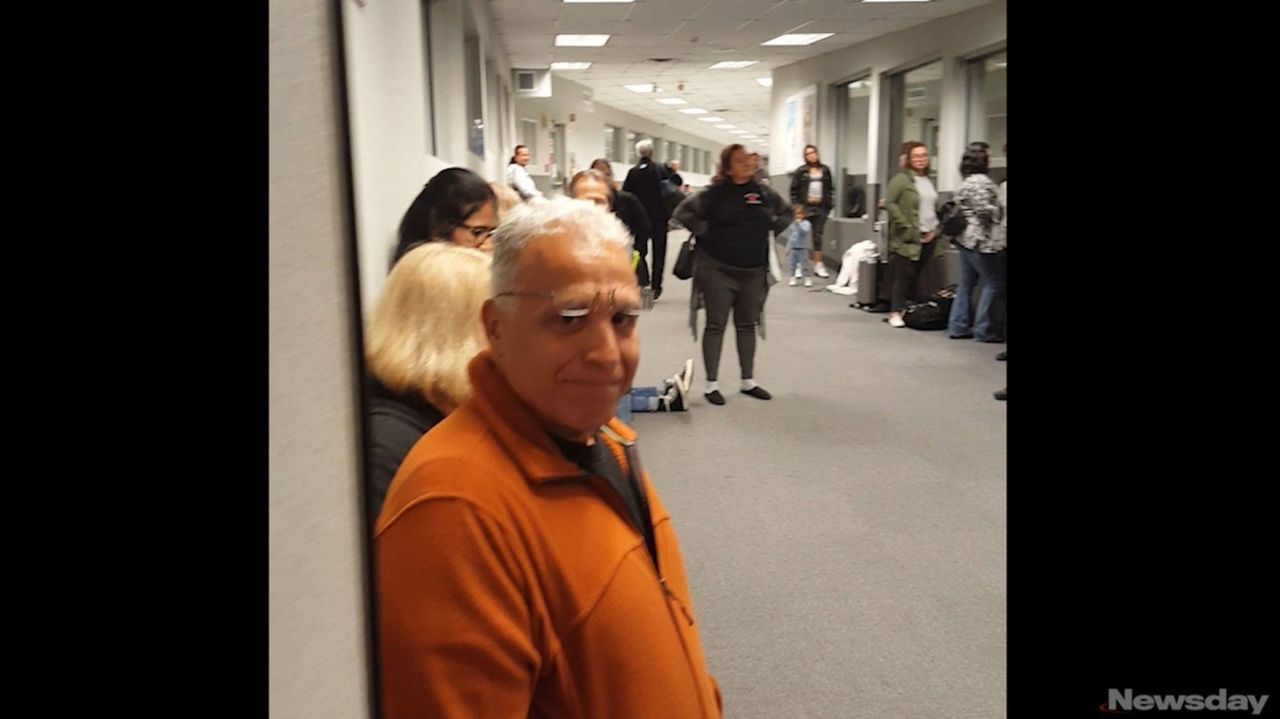 Some passengers spent more than 12 hours waiting at Long Island MacArthur Airport on Wednesday night for an Orlando-bound flight on Frontier Airlines that was delayed multiple times.The flight was scheduled for 7:10 p.m. Wednesday, but didn't take off until 7:45 a.m. Thursday, Oct. 26, 2017, according to information on the airline's website.  Credit: Aaron Charles

Some passengers spent more than 12 hours waiting at Long Island MacArthur Airport on Wednesday night for an Orlando-bound flight that was delayed multiple times.

The Frontier Airlines flight was scheduled for 7:10 p.m. Wednesday but didn’t depart until 7:45 a.m. Thursday, according to information on the airline’s website.

The flight, which has a capacity of 150 passengers, was initially delayed for maintenance, “which then led to a crew issue with the flight,” a spokesman for Frontier said in an email. “Due to this crew issue the flight took an additional delay until a new crew could be moved into place.”

The spokesman said passengers were “informed by our team members at the airport of the delay.”

Passengers were given $15 food vouchers and a $200 Frontier flight voucher to be used within 90 days, according to Aaron Charles, who was on the flight.

“Additional compensation” may also be offered, the Frontier spokesman said.

Charles, 27, of Ridge, was headed to Lakeland, Florida, for a wedding, he said. He arrived at the airport around 5 p.m. Wednesday when he noticed his flight was delayed about an hour. He didn’t think much of it at first, he said, but then the departure was pushed back to 10 p.m., then midnight, and again and again.

“They said it was weather at first, then because of maintenance,” he said. “It was excuse after excuse.”

Charles tried to nap a little in the airport but said he and most of the passengers weren’t able to get much sleep.

Most people waited patiently until about 6 a.m. Thursday, when another Frontier flight to Orlando departed on time ahead of them, Charles said.

“We were calm for the first 12 hours and then started getting annoyed when we realized that instead of letting us go first they let the other flight leave,” Charles said.

The Frontier spokesman said the Thursday morning flight departed on time “in an effort to mitigate additional delays” and because it had a full crew.

Another passenger, Hannah Duffield, 17, of Blue Point, said she was upset they weren’t given more information about the status of their flight.

Airline has flights on sale for as little at $20

When they first learned of a delay, they decided to hold off on driving to MacArthur and luckily didn’t spend the night at the airport, but were still up all night checking their departure time, she said.

“I think the worst part is that the communication wasn’t there,” Duffield said.