Have you caught the unicorn? Why riding LIRR's new fleet is still so rare.

Nearly 1 1/2 years after the Long Island Rail Road’s new state-of-the-art M9 train made its debut on Long Island, only about a third of the fleet is in service.

The LIRR purchased 202 of the rail cars in 2013 at a cost of $734 million, and had expected to have all of them operating by next month.

Spotting an M9 is so rare that some commuters have dubbed it the "unicorn" of the LIRR’s fleet.

Look at what I happened upon this morning: a brand, spanking new #LIRR M9 train, bound for W. Hempstead. Anybody out there been on one of these yet? Thoughts? pic.twitter.com/Noe7cH1kqc

The M9's journey from the drawing board to the assembly line to Long Island commuters’ station platforms has been a long and bumpy one. Numerous issues, from design flaws to test failures to a derailment of the first set of the cars while they were on their way to the LIRR, delayed their arrival by nearly two years.

There are only 70 M9s in service, enough for seven 10-car train sets. By comparison, the LIRR’s M7 electric cars, which are about two decades old, number more than 800.

So where are the M9s?

The LIRR doesn’t expect to have all 202 cars it purchased from the manufacturer, Kawasaki Rail Car Inc., until April 2022.

That's 13 months later than expected. An independent engineering consultant hired by the MTA believes it’s more likely that the cars won’t be ready until October 2022. Kawasaki has only recently begun fabricating its 175th M9 car, according to the report.

The slow rollout is due to what the LIRR calls "several workmanship issues and failures discovered during on-site testing."

Although LIRR officials have said the issues don't pose any immediate threat to the cars' reliability, they could manifest into problems years from now, when the cars are out of warranty.

So, the railroad has refused to accept any more cars until Kawasaki addresses all its flaws.

The warranty issues are expected to delay the rollout of the remaining cars until April 2022, according to the LIRR.An independent engineer hired by the MTA believes October 2022 is more realistic, and estimates that the delays could translate into a $6.6 million cost overrun. The LIRR is demanding that Kawasaki cover all costs caused by the delays.

- LIRR president Phillip Eng in an interview with Newsday

Kawasaki representatives did not respond to requests for comment. But the LIRR and the company already have taken steps to address the problems, including holding daily "Failure Review Board" meetings; conducting a "safety stand-down" to retrain Kawasaki workers, and having "skilled wiring technicians" sent from Japan to an LIRR facility in Queens to perform inspections and repairs of trains already in service.

Despite their issues, the LIRR said the M9s are performing reliably.

The railroad's contract with Kawasaki called for the new cars to reach 150,000 miles between breakdowns. They’ve doubled those expectations at nearly 300,000 miles, according to the LIRR.

Appearing before the MTA Board in July 2019, Yoshinori Kanehana, chairman of Kawasaki Heavy Industries Ltd., said his company had dedicated "competent resources and sufficient budget" to the M9 project, and that "on any project, issues come up because railcars are complex and especially designed for each contract and customer."

When the first M9 pulled out of Huntington on the morning of Sept. 11, 2019, the reviews were largely positive.

On board the LIRR M9’s maiden voyage, Brian Callaghan was most impressed by the new seat armrests. pic.twitter.com/DAeO1XzdBo

Riders appreciated the new amenities, such as push-button automatic sliding doors between cars, wider seats, digital multimedia screens, and displays telling riders which car they were in (e.g. Car 2 of 8).

The new amenities on the M9 trains include more power outlets and wider seats.

But there also were some early complaints. 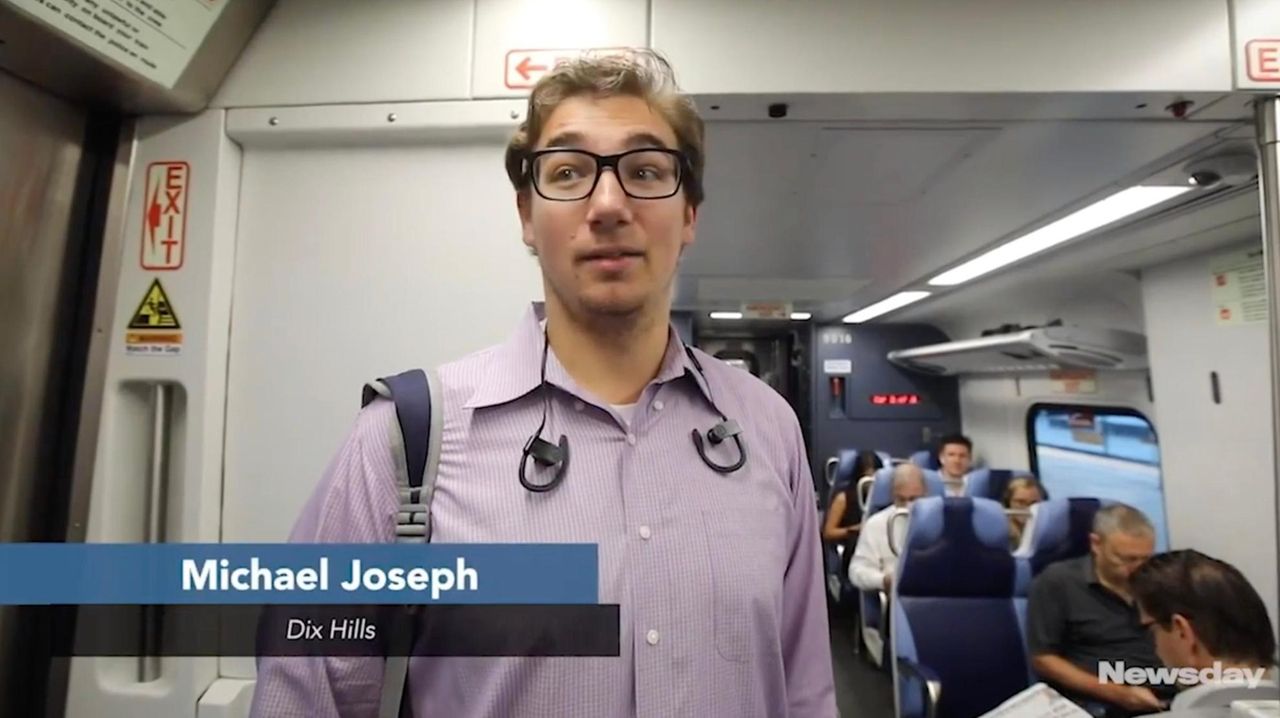 Those included about new LED interior lights that some riders found too bright, and about the placement of electrical outlets on the cars’ walls — requiring some riders to run phone charging cables over fellow passengers’ laps.

"I do like the cars, but the car lighting is oppressively bright. It’s not too bad during the day. But at 6 a.m., it’s the last thing I want to be exposed to," Kaplan said. "I was excited to hear of the M9 when it was announced. I prefer it over the M7 and wish there were more of them."

The LIRR entered into the contract with Kawasaki with the goal of bolstering its fleet in time for the completion of its East Side Access link to a second Manhattan terminal by 2023, and to replace its four-decade old M3 cars.

With COVID-19 shrinking the LIRR's ridership by around 75%, the railroad is running about 20% fewer trains than before the pandemic, and has parked all its M3 trains.