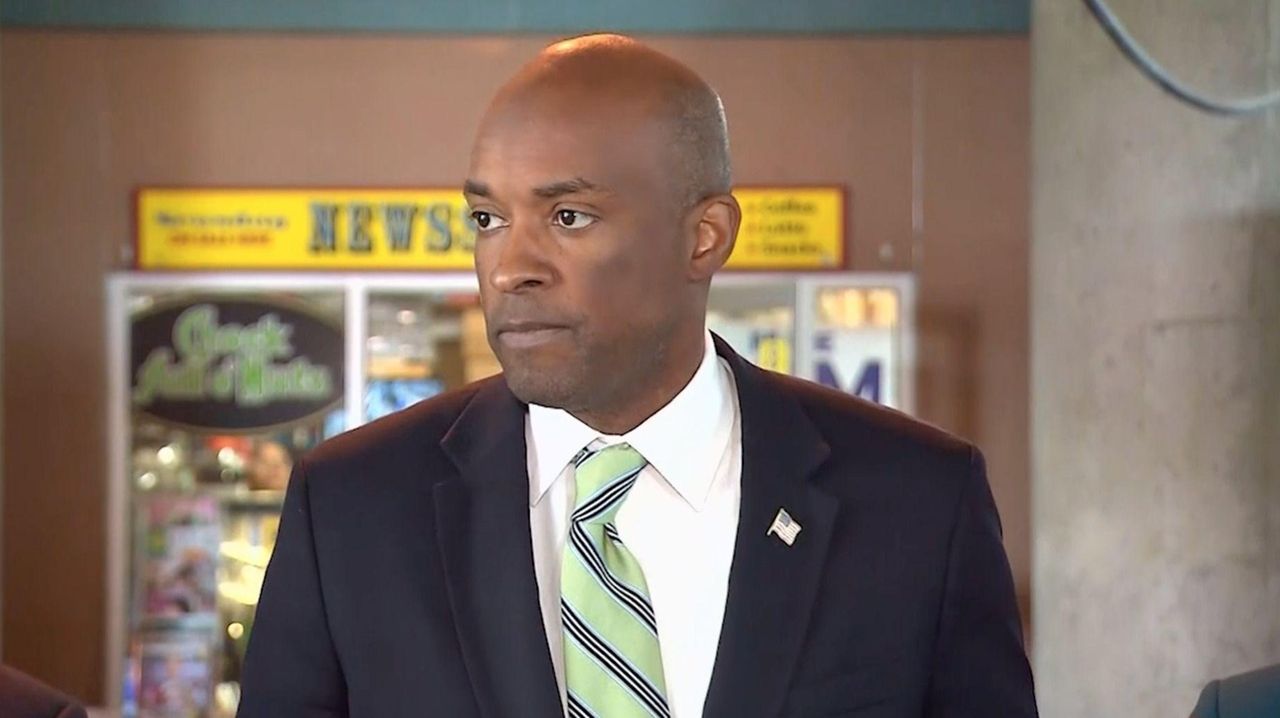 Democratic Nassau lawmakers on Thursday, June 8, 2017, called for the resignation of John Molloy, the county's representative on the MTA Board, saying he has done almost nothing "to help alleviate the crisis" LIRR commuters have faced in recent months at Penn Station. In a letter sent to Nassau County Executive Edward Mangano, Minority Leader Kevan Abrahams (D-Freeport) accused Molloy of "remaining passive" while Long Island Rail Road service has deteriorated.  Credit: News 12 Long Island

Democratic Nassau lawmakers are calling for the resignation of the county’s representative on the MTA Board, saying he has done almost nothing to “to help alleviate the crisis” LIRR commuters have faced in recent months at Penn Station.

“Now more than ever, LIRR riders need an innovative, outspoken and dynamic advocate to protect their interests,” Abrahams wrote. “We therefore insist that you demand Mr. Molloy’s immediate resignation and recommend to the governor a list of potential replacements who will actively seek to restore reliable, high-quality transportation for LIRR commuters.”

Reached by phone Thursday morning, Molloy said he was reappointed last year for a six-year term on the board and intends to stay on in his role. Molloy said he understood the frustration felt by the legislators and by commuters, but has “limited ability” to make a difference.

“I’m just a quiet kind of guy. I listen to what everyone says. I pay attention to everything,” Molloy said. “But I’m not always sure that my role needs to be making it apparent to the world I’m doing what I’m supposed to do.”

The former chief executive of Melville engineering firm H2M, Molloy, 71, was appointed to the 16-member MTA Board in 2013 by Gov. Andrew M. Cuomo, under Mangano’s recommendation. Molloy filled a seat that had been left vacant since 2009, when Cuomo refused to reappoint David Mack to the unpaid position.

Asked for a comment, Mangano spokesman Brian Nevin provided a statement attributed to Molloy that said the county does not control the LIRR. The statement also mentioned Mangano’s involvement in Cuomo’s recently empaneled task force for Penn Station solutions and in offering county assistance and property for a busing plan for LIRR riders this summer.

“These officials are welcome to contact me and I welcome their suggestions as I haven’t heard from them about [about the current crisis],” the statement said.

In contrast to Suffolk representative Mitchell Pally of Stony Brook — one of the MTA Board’s most vocal members — Molloy has been a mostly quiet figure during his four-year tenure on the board, including at LIRR Committee meetings where the recent problems at Penn Station have been discussed.

“We don’t hear from this guy,” Legis. Laura Curran (D-Baldwin) said at a news conference held by several Democratic County legislators at the Hicksville LIRR station. “He hasn’t said a peep throughout all of this. Mr. Molloy has abdicated his responsibility to stand up for us here in Nassau by remaining silent.”

Pally on Thursday defended Molloy, calling him a “fervent” representative for commuters on the LIRR.

“I know John cares about it as deeply about it as I do,” Pally said. “I could assure you he is as vocal as he needs to be internally as sometimes I am externally.”

The Democratic legislators, including Carrié Solages (D-Elmont), Ellen Birnbaum (D-Great Neck) and Arnold Drucker (D-Plainview) said while they had nobody specific in mind to replace Molloy, his successor should be a regular LIRR commuter. Molloy acknowledged Thursday that he rides the LIRR only infrequently.