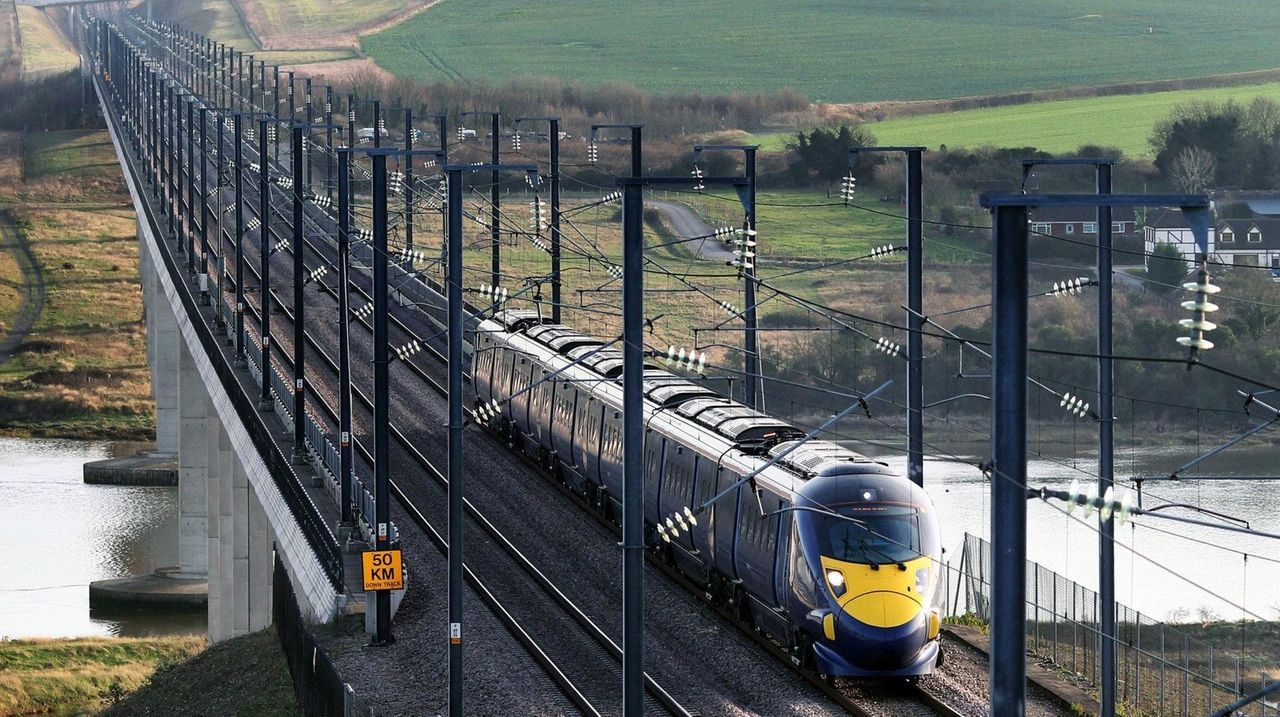 Is the $105 billion North Atlantic Rail Initiative, which would build a high-speed rail system stretching from New York City, across Long Island and under the Sound, then to Boston at speeds of up to 200 mph, a pipe dream? Newsday transit reporter Alfonso Castillo has more on this story. Credit: Newsday

By Alfonso A. Castillo alfonso.castillo@newsday.com @alfonsoreports Updated May 11, 2021 10:41 AM
Print
fbShare Tweet Email

A coalition of Long Island planners and lawmakers is lobbying for a proposed $105 billion high-speed rail system stretching from New York City to Boston, with several stops in Nassau and Suffolk counties and a tunnel across the Long Island Sound.

But even while winning over some influential planners and politicians, organizers behind the North Atlantic Rail Initiative still face considerable skepticism, including from transportation experts and advocates who see the proposed project as unnecessary and unrealistic. The project calls for excavating rail tunnels on Long Island.

Although contemplated by regional planners for years, the idea to bring a bullet train to Long Island has gained momentum in recent months, as the project’s organizers have seized the opportunity of having a president, a Senate majority leader and key federal transportation officials with reputations for supporting investments in the Northeast rail corridor. Their goal is to make the rail line, which would be the first of its kind in the United States, a centerpiece of President Joe Biden’s proposed $2 trillion infrastructure package.

The North Atlantic Rail proposal would construct a $105 billion high-speed rail network from Manhattan to Boston, with several new tunnels in New York City and Long Island, including one across the Sound.

Trains would travel at speeds of up to 200 mph, bringing passengers from New York City to Boston in 1 hour and 40 minutes.

Project officials are hoping for approval, and funding, from the federal government through President Joe Biden's $2 trillion infrastructure plan.

The project’s price tag would make it among the most expensive public works projects in the nation’s history — about 10 times the budget of the MTA’s East Side Access project linking the Long Island Rail Road to Grand Central Terminal.

The project’s timeline, and scope of construction, would be similarly huge. The work, which would take about 20 years, would include the excavation of several rail tunnels — under the East River to Penn Station, through parts of Queens and Long Island, and from Port Jefferson, across the Long Island Sound, to Bridgeport, Connecticut.

Trains would travel at speeds of up 200 mph — roughly three times the LIRR’s top speeds and about 33% faster than Amtrak’s Acela trains. Project officials said the cross-Sound configuration would drastically reduce intercity rail travel times — allowing passengers to get from Manhattan to Boston in 1 hour and 40 minutes.

The project, proponents said, also would reduce pollution from cars, spark economic activity along the seven-state corridor, and address racial and social inequities by giving improved transportation access to underserved communities. It also could promote affordable housing by allowing families to live farther from the office — a growing trend during the pandemic, as people are commuting fewer days but longer distances.

"We don’t have a transportation system that can do that. We have a transportation system designed to get people into the city in the morning and out in the afternoon and at slow speeds, and without the reliability and the frequency … that's going to be needed," said Robert Yaro, a project steering committee member and former president of the Regional Plan Association. "All of this suggests that we’ve got to start thinking differently. And that's what we're trying to do. And we're trying to bring people along to that line of thinking."

"I've always been forward-leaning, but I've never been engaged in things that I don't think have a chance of success. And this is the most transformative project that I've ever seen that I think is doable, as well," said Bellone, who has for years pushed transportation improvements as part of his Connect Long Island initiative. "The North Atlantic Rail project is Connect Long Island on steroids."

The Suffolk County Economic Development Corp. and the Rauch Foundation each have committed $25,000 to help fund the development of a business plan for the project. But much more is needed to get the effort off the ground. Organizers said a list of "early action projects," including the modernization of the LIRR’s Oyster Bay branch and extending electrification of existing tracks to Riverhead, would cost around $24 billion.

The total proposed rail expenditure in Biden’s infrastructure plan is $80 billion, and the North Atlantic Rail team would be competing with other proposals already in the pipeline, including Amtrak’s Gateway tunnel across the Hudson River, the rehabilitation of the existing East River Tunnels, and the MTA’s proposed reconstruction and expansion of Penn Station.

In March, Metropolitan Transportation Authority chairman Patrick Foye said he held the planners behind the North Atlantic Rail project "in high regard" and was interested in learning more about their proposal. But he also noted that the MTA already has "huge needs in terms of completing" existing infrastructure projects.

While bringing high-speed rail to the Northeast, and Amtrak service to Long Island, are worthwhile goals, the North Atlantic Rail proposal may not be the most efficient means of meeting them, said Gary Prophet, president of the Empire State Passenger Rail Association, a New York-based intercity rail traveler advocacy group. He noted that the LIRR’s ongoing effort to construct a Third Track through its Main Line in Nassau could provide enough capacity for Amtrak to one day serve Long Island.

In a recent proposal to expand service with more federal funding, Amtrak said it would consider running to Ronkonkoma.

'I’m not sure building a … tunnel under the Long Island Sound is something that can be done in a cost effective way.'

"I’m not sure building a … tunnel under the Long Island Sound is something that can be done in a cost effective way, or even in 20 years," Prophet said. "I just see the Long Island proposal as a very expensive proposal that really only benefits people going to and from Boston."

Mitchell Moss, director of the Rudin Center for Transportation Policy and Management at New York University, went further — saying that, with a finite amount of federal infrastructure dollars to spend, the priority should be "things that we need, not things that are fantasies." To connect people across long distances, Moss said the government should focus on broadband communications, and not high-speed rail systems "favored by a handful of elitists."

"This is a solution in search of a problem. We have a perfectly good aviation system for long-distance travel," Moss said. "Our need is for people commuting to work."

Yaro said the new system could offer various kinds of services, including for traditional New York commuters, and would be priced to be "affordable to real people." Wealthy travelers and those using expense accounts would pay for "premium" accommodations in the first few cars, and, in doing so, would help subsidize the trips of those in the rest of the train, Yaro added.

The project also probably would meet some resistance from Long Island communities impacted by the proposed construction, including in Port Jefferson, under which the tunnel across the Long Island Sound would begin. Sal Pitti, president of the Port Jefferson Station/Terryville Civic Association, noted that past proposals to build a cross-sound bridge from the village were resoundingly rejected by residents.

'If they’re talking about digging up the ground underneath Port Jefferson to get to Connecticut, I guarantee you it’s going to meet the same kind of resistance.'

"If they’re talking about digging up the ground underneath Port Jefferson to get to Connecticut, I guarantee you it’s going to meet the same kind of resistance," Pitti said.

Undeterred by skepticism, Yaro noted he encountered similar reactions while serving as president of the Regional Plan Association, which advanced several other multibillion-dollar transportation projects, including East Side Access, the Second Avenue Subway, and the LIRR’s Third Track.

"With all these things, everyone said, ‘It’ll never happen. It’s impossible. You’ve got to be kidding me. It costs too much. It’s too difficult. It’ll take too long.’ And we built them," Yaro said. "It just takes the attitude of, ‘OK, we’re going to do this thing.’ "