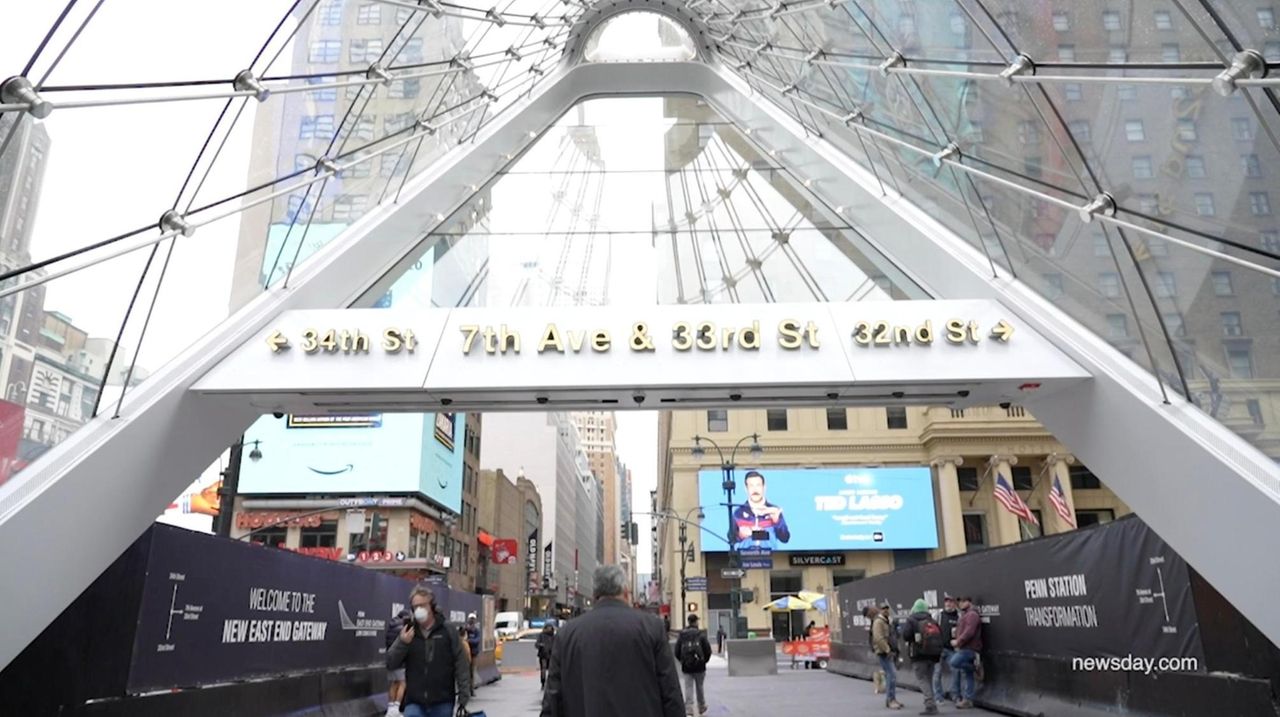 The East End Gateway, which opened to the public Thursday, is the new entrance to Penn Station at 33rd Street and Seventh Avenue. Credit: Corey Sipkin

Penn Station’s week in the limelight continued Thursday with officials unveiling a new entrance to the Long Island Rail Road concourse that they called a milestone in efforts to improve the Manhattan transit hub.

Commuters are greeted by a 40-foot-tall canopy of glass and steel that rises above the new entryway at Seventh Avenue and 33rd Street. One staircase and three escalators descend directly to the LIRR corridor, enabling Long Island commuters to bypass Penn’s labyrinth of halls and stairways to get to and from their trains.

The unveiling came one day after officials celebrated the opening of Moynihan Train Hall, a Penn Station annex across Eighth Avenue. Officials say more is to come in the campaign to overhaul the busiest transit hub in North America.

The new entrance is "a huge milestone in what will be and is a long-term project to really transform Penn Station," Janno Lieber, chief development officer of the Metropolitan Transportation Authority, said Thursday to dozens of construction workers gathered before the canopy they helped build. "No more will people wander around 34th Street saying: ‘Where is Penn Station?’ They’ve got this."

In an interview later, Lieber said the new entryway restores Penn’s presence on Seventh Avenue — a presence that was diminished when the original station was torn down in the 1960s. Since then, Penn's newer, less-admired iteration has sat underneath Madison Square Garden, making its entryways hard to find — especially for people who aren’t daily commuters.

The new entryway is the first phase of a broader effort to improve the LIRR side of Penn. The second phase — which involves widening the LIRR concourse, raising its ceilings and upgrading its retail options — began in October and is expected to wrap up in early 2023, MTA officials said.

The entire project should cost $729 million, Lieber said. Newsday last year reported the price tag at $600 million, but MTA spokeswoman Abbey Collins said additional improvements since have been added to the scope of work. The entryway cost $170 million.

The new entryway received positive reviews from the first Long Islanders who passed through it Thursday.

"There was actual light," said Frederick Clark, of Glen Cove, referring to the natural light the canopy lets into the otherwise-windowless LIRR concourse. Clark, an art dealer, said he’d use the new access point when commuting.

J.R. Wales, an apprentice elevator builder from Medford who takes the train into the city daily, praised the entryway, but he couldn’t do the same for the station below.

"The new entrance is beautiful," he said, "but once you get down to the bottom of that escalator, it’s not what you want to walk through right now."