Ribbons were cut Dec. 30 for the sunlight-drenched Moynihan Train Hall, a new transit hub that opened on New Year's Day across Eighth Avenue from dingy Penn Station, offering a new way to directly access half of the Long Island Rail Road's tracks.

Among those wielding oversized scissors was Gov. Andrew M. Cuomo, who hailed the train hall, housed in what was once the century-old sorting room of the Farley Post Office Building. That building, dating to about 1913 and in the Beaux-Arts style, was designed by McKim, Mead & White, the same architects who did the original, grand Penn Station, which was demolished in 1963 in an act still bemoaned today.

The project, which began construction in 2017, does not expand train or track capacity. A plan to expand such capacity could come to fruition by 2028, said Holly Leicht, executive vice president for real estate of Empire State Development, the state’s economic development corporation.

Among transit challenges for the region, there remains a dire need for a new rail tunnel beneath the Hudson River to replace the deteriorating, century-old tunnel that connects New York and New Jersey and serves as a critical transportation junction.

The original Penn Station, completed in 1910, boasted Corinthian columns, a travertine-covered main hall, semicircular Roman windows and a vaulted coffered ceiling. The station's demolition and replacement with office space and Madison Square Garden — the train hub was consigned to go below ground in a warren of cramped corridors — helped catalyze the modern architectural preservation movement.

The new hub, three decades in the making and costing $1.6 billion, is 255,000 square feet and offers a new way to access 12 of Penn’s 21 tracks. The hub serves both LIRR and Amtrak passengers at Penn Station, the busiest in North America. 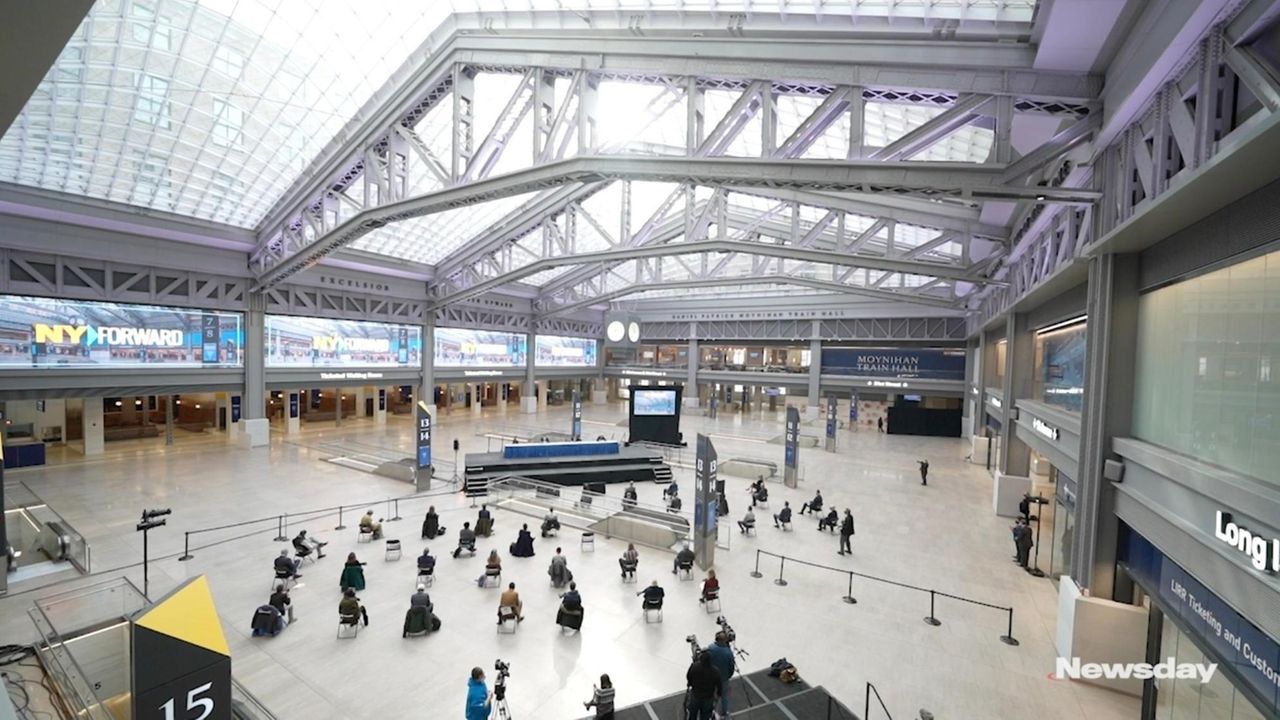 On Dec. 31, a new entrance to the LIRR concourse opened on the southwest corner of West 33rd Street and Seventh Avenue — called the East End Gateway.

For Long Island Rail Road passengers, the train hall gives direct access via the new hall to half of the LIRR's 10 tracks — tracks 12 through 16 — and access to the rest, tracks 17 through 21, via an escalator, stairs or elevator, and a walk through a passageway, Donovan said.

There are more escalators for commuters to get to or from train platforms. That's expected to reduce crowding. Doug Carr, executive director of the project’s development corporation, said roughly a third of LIRR passengers are expected to use the new train hall, with the balance using old Penn Station.

Views of the Moynihan Train Hall during a media tour, Wednesday, Dec. 30, in Manhattan.

Moynihan Trail Hall — named for Daniel Patrick Moynihan, a U.S. senator representing New York from 1977 until 2001 who championed the project — is closed from 1 to 5 a.m., according to signage stenciled onto the doors.

"The building is a commercial condominium, is what the structure of the actual building is, and given the governance and the ability to operate, clean and maintain the facility, there’s gonna be a closure period, and it’s also a low-period of train traffic," Carr said.

On sale will be food and drinks from Blue Bottle Coffee, Magnolia Bakery, Starbucks, H&H Bagels and others. Starbucks opened Jan. 1, and the rest will open on a rolling basis over the next 12 months, according to Empire State Development spokesman Matthew Gorton.

Of the $1.6 billion, $550 million is from the state budget; $100 million comes from the budget of the state-controlled Metropolitan Transportation Authority; $105 million is from Amtrak; $150 million is from the Port Authority of New York & New Jersey and there's $62 million in federal grants, Gorton said. There's also a $630 million investment — including a $400 million federal loan — from private developers who own the office and commercial space that’s part of the project, he said. Among the tenants will be Facebook, which is leasing 730,000 square feet.

Speaking just before the Dec. 30 ribbon cutting, Cuomo said of the train hall: "This would be an amazing accomplishment at any time, but it is an extraordinary accomplishment today because today is a different day," one in a year of a once-in-a-century pandemic that, as of then, according to the state COVID-19 tracker, had sickened at least 957,412 New Yorkers and killed 29,905 of them.

A station with a better view for LIRR commuters in 2021The refurbished James A. Farley Building will open Jan. 1 and allow riders to buy tickets and await trains amid a new central atrium topped by a 92-foot-high skylight roof.