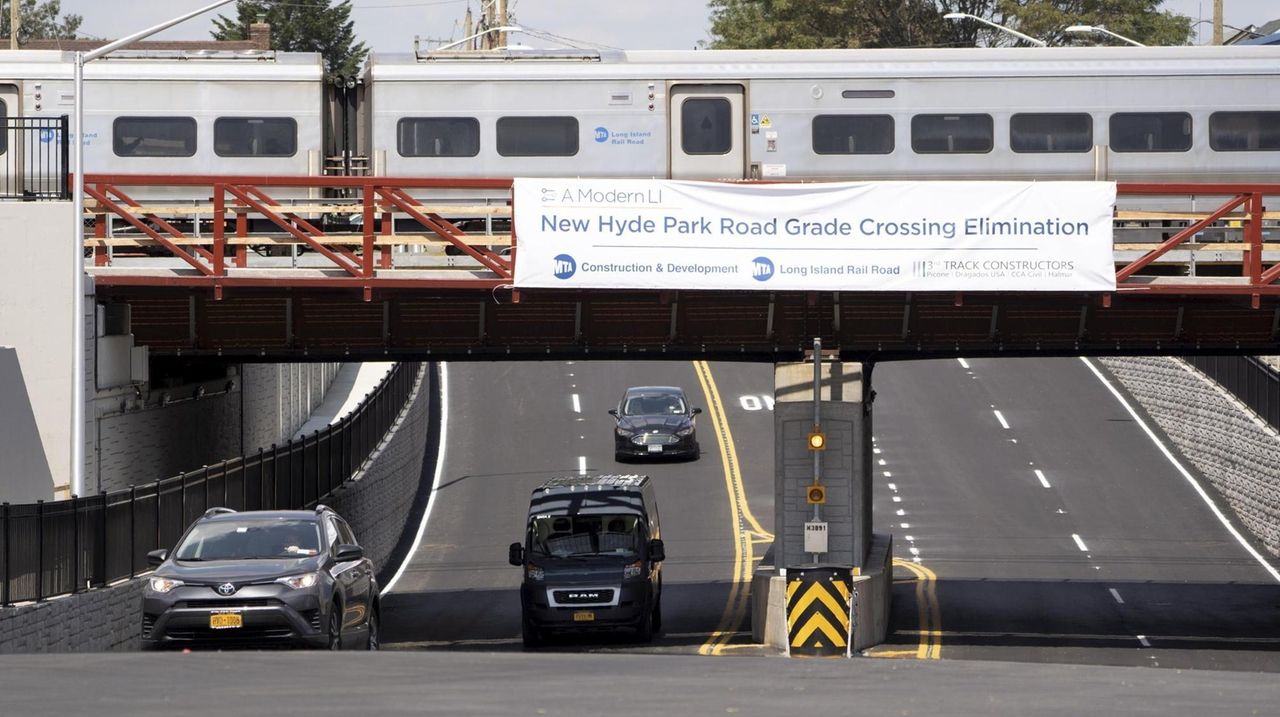 The underpass at New Hyde Park Road replaces a grade crossing that previously stood at the busy intersection.

The crossing had been closed since February so crews could take on the project, which involved excavating the land adjacent to the tracks, constructing a 3,550-ton train bridge inside the crater, and then, over a weekend in July, pushing the new bridge into place.

The newly reconfigured roadway, which includes five lanes for traffic and pedestrian sidewalks on either side, was originally scheduled to reopen around Labor Day, but was completed early, officials said.

Cuomo recalled his experiences as a young driver being stuck in backed-up traffic at the crossing, waiting for trains to clear out and the safety gates to rise.

"It was one of those situations where you'd look at it and say, 'Why don't they fix this?'. . . It was a constant problem for the community for years," said Cuomo, who was joined by LIRR president Phillip Eng and MTA chief development officer Janno Lieber. "This was a project that was long overdue. It's done. It was done during a very tough time."

Cuomo came to Long Island in January 2016 to announce he was resuscitating the Third Track proposal, which had been dormant for years because of opposition from some residents and elected officials who were concerned about the LIRR having to build over private property.

The New Hyde Park Road crossing is one of eight to be eliminated as part of the Third Track project, which aims to build a 10-mile third track on the LIRR’s Main Line between Floral Park and Hicksville. The crossing eliminations were a key selling point for communities near the tracks, as project officials have promised they will reduce traffic congestion, air and noise pollution, and accidents with trains hitting vehicles or pedestrians on the tracks.

Sam Carpentiere, who has lived in New Hyde Park near the former grade crossing for 40 years, said he "will not miss" the sound of the train horns blasting as the trains pass by, or the numerous accidents — including one he said sent a flipped car into his bushes.

"When the gates would go down, another train would come by and another, and the gates wouldn't go up sometimes for a good 20 minutes," Carpentiere, 73, said. "In the morning, you couldn't get out of the driveway."

Project supporters say the Third Track increases the LIRR’s capacity and flexibility to run trains in both directions during the rush hours, allowing the railroad to more easily bounce back from unplanned service disruptions and to better serve “reverse commuters” traveling to and from jobs on Long Island.

At a media briefing later in New Hyde Park, Cuomo discussed the MTA's financial outlook. He said the transit agency has signaled it could turn to steep fare hikes, service cuts and layoffs to fill a budget deficit expected to reach more than $10 billion in 2021.

"As a practical matter, simple math: Ridership has been down dramatically. Now, as their revenues are down dramatically, their costs have not been reduced. So something has to give," said Cuomo, who would not speculate on the potential for the MTA to use fare hikes, in part, to close its budget gap.

"I don't know what's on the table, what's off the table. I think it's premature," he said.