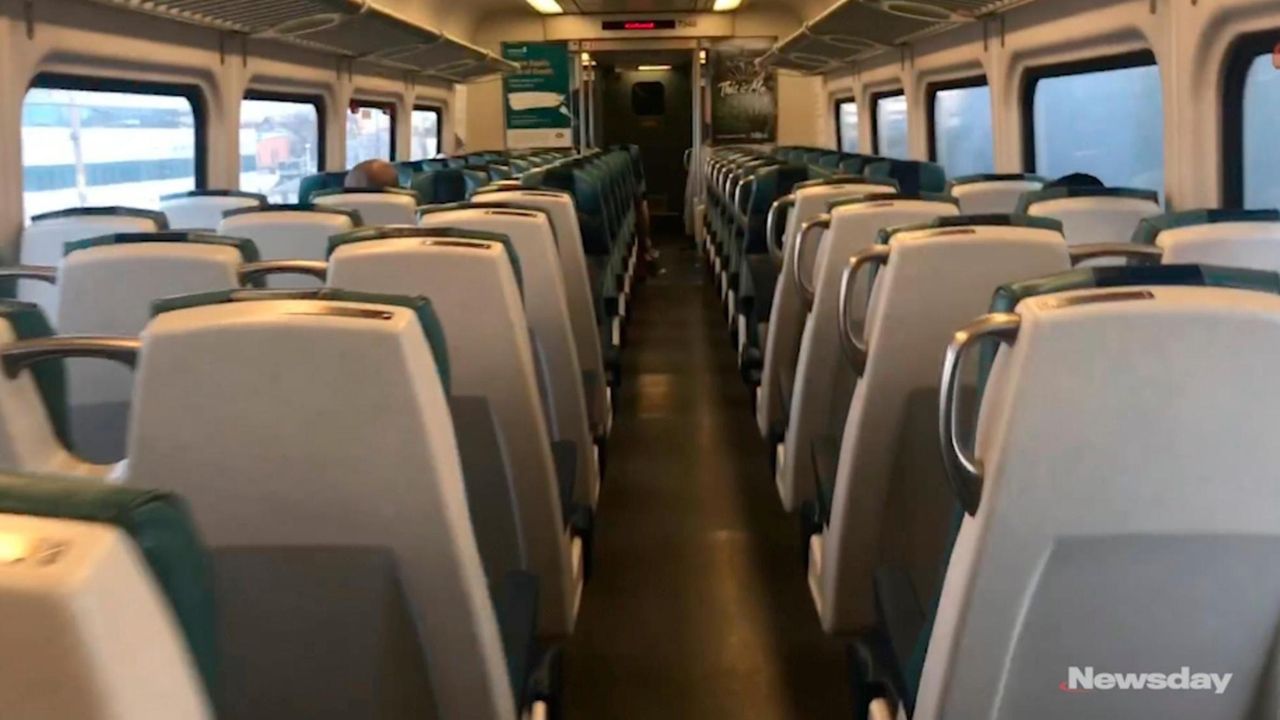 Far from a ghost town, Penn Station — the most heavily used transit hub in the United States — remains quite busy amid coronavirus concerns. But for seasoned commuters, the difference in the crowd is plenty noticeable, and plenty eerie.

“It’s so strange,” Bryan Sober, of Woodmere, said as he waited with several dozen other commuters below the main departure board at Penn around 5:30 p.m. Thursday — the traditional height of the evening rush hour. In contrast to the usual shoulder-to-shoulder conditions at the station, which has been more crowded than usual in recent months because of construction work, riders had plenty of room to spread out — and took advantage of it.

The Metropolitan Transportation Authority’s ridership numbers confirm the plummet in ridership, which has dropped steadily over the past couple of weeks, as major firms have allowed, or mandated, employees to work from home, and as a growing number of commuters have sought to avoid public transportation — one of the most challenging atmospheres in which to practice the “social distancing” that medical experts have recommended.

According to the MTA, LIRR ridership was down 31% Thursday morning as compared to the same day in 2019. Similar reductions in ridership have been felt throughout the MTA’s agencies, including subways, which were down 18% Wednesday. Automotive traffic on the authority’s bridges and tunnels also has fallen by 6%.

MTA chairman Patrick Foye, during an appearance on Fox 5 News Friday morning, said he expects “those numbers will continue to drift down.”

“We're running normal service, that's the plan going forward. We will be considering, as we have every step of the way, the advice of medical professionals in public health,” Foye said. “You may find it a little easier to get a seat than you have in the past. That's a small upside, but the system is safe. It's operating normally, [and] it's on or close to schedule.”

The drop in ridership also has been apparent at station parking lots that have become increasingly spacious over the past week, and onboard trains. On the typically packed 5:33 p.m. train out of Penn Station to Hicksville on Thursday evening, most of the riders who stood did so by choice, as not to get closer to fellow passengers than absolutely necessary.

“Usually, this jams up,” said Gregory Lavine, 42, of Glen Cove, as he stood in one of the train’s car vestibules — a couple other rides standing a few feet away. “I’m seeing people cognizant of not being too close to each other. New Yorkers are kind anyway, but I’m seeing a special sense of just being careful.”

While some riders take advantage of their ability to telecommute, many more remain on the rails, unwilling, or unable, to be deterred from their normal routines. Dularie Ramkishun, who works as an administrator at Baruch College in Manhattan, said while ridership on her train has declined, it “hasn’t declined as much as you’d expect.”

“Obviously, you do have concerns, but at the end of the day, you have to get to work,” said Ramkishun, of Franklin Square, who described the fellow passengers being hyper-aware whenever they hear someone on a train. “You try not to touch anything, be around too many people, avoid someone who looks like they might be sick and is coughing a lot.”

The drop in fare-paying riders — and the labor expense of a stepped-up station and fleet sanitizing effort — is expected to deliver a heavy financial blow to the MTA, which, according to a State Comptroller’s report issued earlier this week, is already on pace to having $53 billion in debt costs, an increase of nearly 50% from 2019. Comptroller Thomas DiNapoli speculated that the surging costs could result in riders being “saddled with even higher fares and tolls than already planned.”

Despite the financial impact from the coronavirus, Sen. Todd Kaminsky (D-Long Beach), and other members of the Senate's Democratic majority, on Friday, in a letter to Foye, urged the MTA to consider waiving the $10 fee on LIRR ticket refunds. The request comes as scores of commuters find themselves making little use of monthly passes averaging $344.

“These hardworking fare-payers are rightfully seeking refunds at no fault of their own, and indeed, protecting public health through their actions,” Kaminsky wrote. “Charging them the normal fee would not only seem to be punitive, but unfair and contrary to the spirit of New Yorkers supporting one another during an unprecedented crisis.”