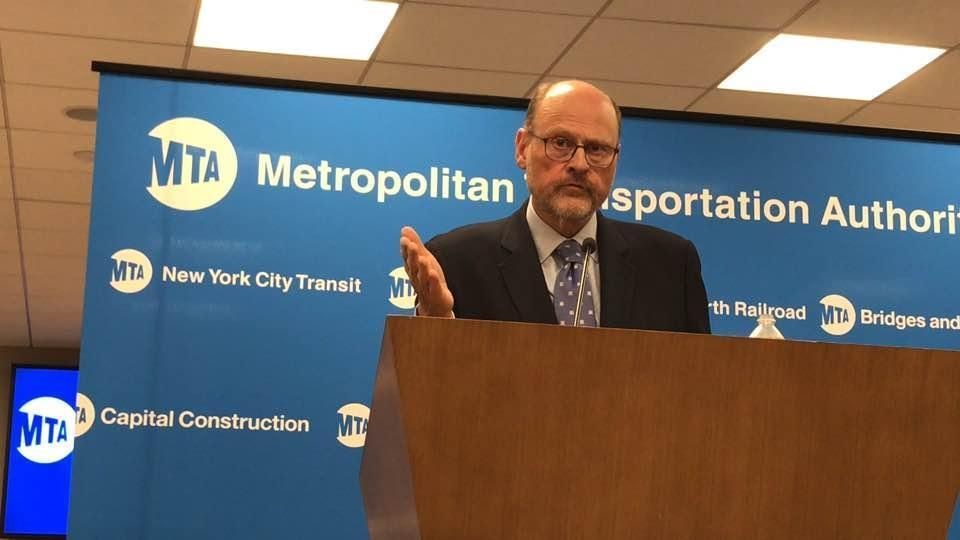 At a meeting of the Metropolitan Transportation Authority Board on Wednesday, agency chairman Joseph Lhota discusses the $58 million cost of the agency's plan to deal with the Penn Station service disruptions caused by Amtrak's summer repairs. (Credit: Newsday / Alfonso A. Castillo)

The MTA’s plan to deal with the so-called “summer of hell” service disruptions at Penn Station is costing the agency nearly $58 million, according to budget documents released Wednesday.

The costs of the plan, detailed in the Metropolitan Transportation Authority’s midyear budget update, include $18.5 million to lease nearly 200 express buses that have received little use since they began operating July 10.

MTA Chairman Joseph Lhota defended the costs, which he said were necessary to provide riders with “an abundance of options” while Amtrak’s infrastructure renewal work forces the Long Island Rail Road to reduce rush-hour service at Penn Station.

“You have to think about it this way: If we did nothing, if we just accepted the fact that we had to reduce about 20 percent of ridership coming to Penn Station, think of the catastrophe to the economy of the entire metropolitan area — Long Island in particular,” Lhota told reporters after an MTA Board meeting where the agency’s financial plan was presented. “Was it a lot of money? Yes. Is it well worth it? Yes.”

Riding the MTA's summer express bus to NYC Newsday transportation reporter Alfonso A. Castillo takes a ride on one of the MTA's special express buses from Valley Stream to Manhattan that were put in place to help LIRR commuters get around to during the summerlong service disruptions at Penn Station. July 27, 2017 (Credit: Newsday / Alfonso A. Castillo)

Also included in the cost of the mitigation plan are $5 million for new ferry services from Glen Cove and Long Island City, $4 million for MTA Police coverage, $3 million for LIRR support staff, and $22 million in lost revenue, including from reducing fares to and from Atlantic Terminal and Hunterspoint Avenue to encourage riders to avoid Penn Station.

Amtrak has said the cost of the track repairs themselves, estimated to be 50 percent complete, is $30 million to $40 million.

MTA Chief Financial Officer Robert Foran said the agency is covering the costs out of a $155 million reserve fund meant to “offset a reduction in revenues, unexpected expenses over budget or just to handle any other uncertainty that is realized.” In the long term, Foran said, MTA officials “continue to seek reimbursement” for the costs of the plan.

MTA leaders and Gov. Andrew M. Cuomo, who predicted the Penn Station work would cause a ‘‘summer of hell’’ for commuters, have both said they intend to recover the costs of their summer expenses from Amtrak, which owns and operates Penn Station — even if it means withholding subsidies to the agency totaling about $46 million a year.

“To be perfectly clear, the people of New York will not be on the hook for this,” Lhota said. “Amtrak caused this, Amtrak has to pay for it.”

Amtrak has said it has no intention of — and is legally prohibited from — reimbursing the MTA for the costs accrued because of the repairs at Penn, where the LIRR runs most of the trains.

‘‘As we’ve said before, there is no basis for MTA to require Amtrak to reimburse LIRR costs while we upgrade Penn Station for the benefit of all users,’’ Amtrak said in statement Wednesday. ‘‘MTA, in running their own system, understands that extended work closures are sometimes necessary to maintain and improve the system. Rather than threatening to withhold payments to Amtrak that are required to keep the station operating reliably and safely into the future, we hope the MTA will focus on how we can work together to make Penn Station better for all passengers.’’

Elsewhere in its updated financial plan, the MTA revealed plans to increase its cost-cutting targets to achieve $2.3 billion in annual savings by 2021, as compared to when the effort began in 2010.

Although the MTA is projecting annual budget surpluses through 2020, the fare increase plan is necessary to avoid sizable deficits, Foran said.

MTA Board member Mitchell Pally of Stony Brook said he thought it was time to reconsider how the agency relies on the fare hikes to make ends meet, and pushed for the creation of new, dedicated revenue streams.