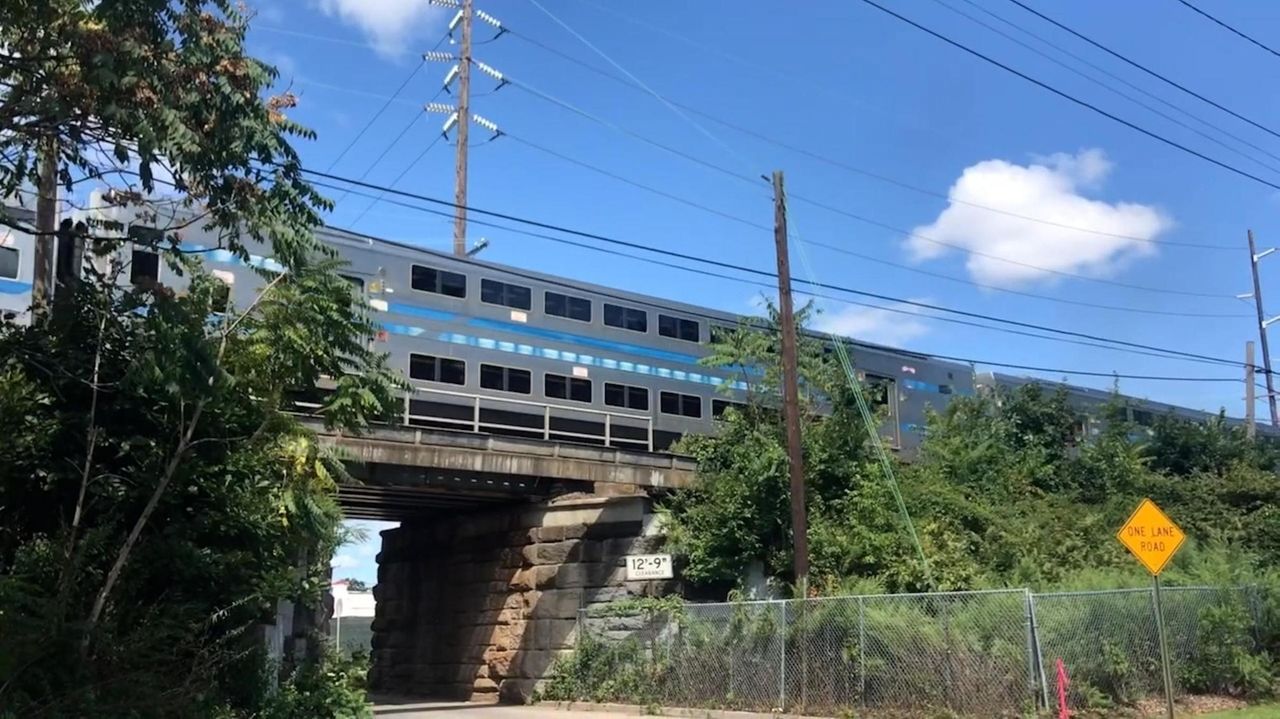 A legal skirmish between the MTA and the Village of Garden City over roadwork permits is threatening to derail the Long Island Rail Road’s Third Track project — potentially delaying and driving up the cost of the $2.6 billion effort, and worsening the impact of construction on local residents, transportation officials said.

It’s the latest battle in a prolonged feud between the Metropolitan Transportation Authority and the village, which earlier this year sued the LIRR over the placement of several utility poles installed at the Merillon Avenue station as part of the project. That suit is in appeal after being thrown out by a state Supreme Court justice in July.

The LIRR's Third Track project "will not be able to meet its contractually mandated completion date of December 2022" because of a delay from Garden City officials in the issuance of needed permits for a bridge replacement project in the village, according to an MTA attorney.

Various Garden City village officials did not respond to requests for comment or declined to comment. But in a message posted on the village’s Facebook page, Mayor Cosmo Veneziale cited concerns from residents over “potential changes to the roadway and bridge design.”

MTA officials believe they can get the project back on track, but say it will require extending construction and adding new costs to the $2.6 billion project.

LIRR and MTA officials, in a separate state Supreme Court lawsuit filed in June, are accusing the village of "holding hostage" various permits needed to advance the replacement of a rail bridge over Denton Avenue as part of the Third Track project.

In a letter written to the court last month and obtained by Newsday, MTA attorney Steven Russo said that because of the delayed permits, "the Third Track project will not be able to meet its contractually mandated completion date of December 2022."

While declining to comment on pending litigation, MTA officials acknowledged the setback. They expressed confidence in getting the Third Track project back on schedule but said doing so will require having heavy construction work take place during nights, on weekends, and into the winter months. It will also drive up costs, they say, including in extra overtime for workers. The bridge work was supposed to begin in March.

Various Garden City village officials, including Mayor Cosmo Veneziale, did not respond to requests for comment, or declined to comment because of pending litigation. In a message posted on the village’s Facebook page about the Denton Avenue Bridge permit dispute, Veneziale cited concerns from residents over "potential changes to the roadway and bridge design."

"As of this date, no plan for the reconstruction of the Denton Avenue Bridge and the related roadway has been finalized," Veneziale said in the Facebook statement.

The MTA and the LIRR in June petitioned a state court to compel the village to issue the permits, which would allow for road closures and utility relocations needed for the bridge work. In court papers, the transit agencies said the village last year approved the final design for the bridge project. A new village administration, including Veneziale, the new mayor, were elected to office earlier this year.

"Whatever the merits or lack thereof of the utility pole litigation, it bears no relationship to the Denton Avenue Bridge Project, and there is absolutely no basis in the Village Code for the Village’s refusal to issue this standard construction work permit," the LIRR and MTA stated in their lawsuit.

According to MTA officials, in July the village sent a letter to the agency requesting $10 million and other concessions, and also sought changes in the bridge and underpass design.

The Garden City road permit dispute stands as, potentially, the most significant obstacle in the way of the Third Track project since it was launched in 2016. The effort, formally known as the LIRR Expansion, aims to construct a 10-mile-long third track between Floral Park and Hicksville — a notorious bottleneck for the railroad.

The MTA needs to widen several bridges along the project’s path, including the 77-year-old Denton Avenue Bridge, to accommodate the additional track.

Project supporters say the extra capacity from the Third Track will reduce delays and cancellations, facilitate the "reverse commutes" of people traveling to and from jobs on Long Island, and maximize the benefits of the LIRR’s other megaproject, East Side Access, which will link the railroad to Grand Central Terminal.

After being stymied by local opposition for decades, then-Gov. Andrew M. Cuomo resurrected the project with the promise of improving communities along its corridor — including by eliminating several grade crossings — and by minimizing the impact from construction.

As recently as Sept. 3, MTA acting chairman and chief executive Janno Lieber proclaimed the Third Track to be "absolutely on-time and . . . a little under budget."

In his letter to the court last month, Russo, the MTA attorney, said the delay of the bridge replacement "will have cascading effects on other MTA/LIRR projects that are critical to the Long Island economy and the hundreds of thousands of commuters who rely on the LIRR each day," including East Side Access.

A call to 'work things out'

David Kapell, co-chairman of the Right Track for Long Island Coalition — a nonprofit group formed to support the Third Track — called the dispute "unfortunate" and urged village and MTA officials to "sit down and work things out and get this project back on track."

"Basically, you have a small village looking to hold the entire Island hostage," Kapell said of Garden City, which has a population of about 22,000 people, according to census data.

"The village really should not be allowed to thwart what is, arguably, the most important project on Long Island in 50 years," Kapell added.

Garden City resident Richard Corrao, who sits on the village’s Third Track Committee, declined to comment on the bridge permit dispute other than to say "there are all sorts of issues" involved. He added that the village, and its residents, "are appropriately leery and should proceed cautiously" in dealing with the MTA on the project.

Corrao added that he believes residents generally support the Third Track but have been misled by project officials. He said that in addition to the utility poles being taller and closer to homes than originally planned, the project has generally been more obtrusive to residents than promised.

"The whole way this has been handled by the MTA, which is supposedly representing that they were going to work with communities, has been outrageous," Corrao said. He laments the clearing of several tall trees and the installation of bright new lights at the Merillon Avenue station. "It’s devastating. I mean it looks horrific."

In its ruling on the village’s lawsuit, the court said that the MTA and LIRR conducted "significant public outreach" before beginning its construction work, and noted that the project plan made it clear that the specific location of each utility pole "would be determined on a case-by-case basis."