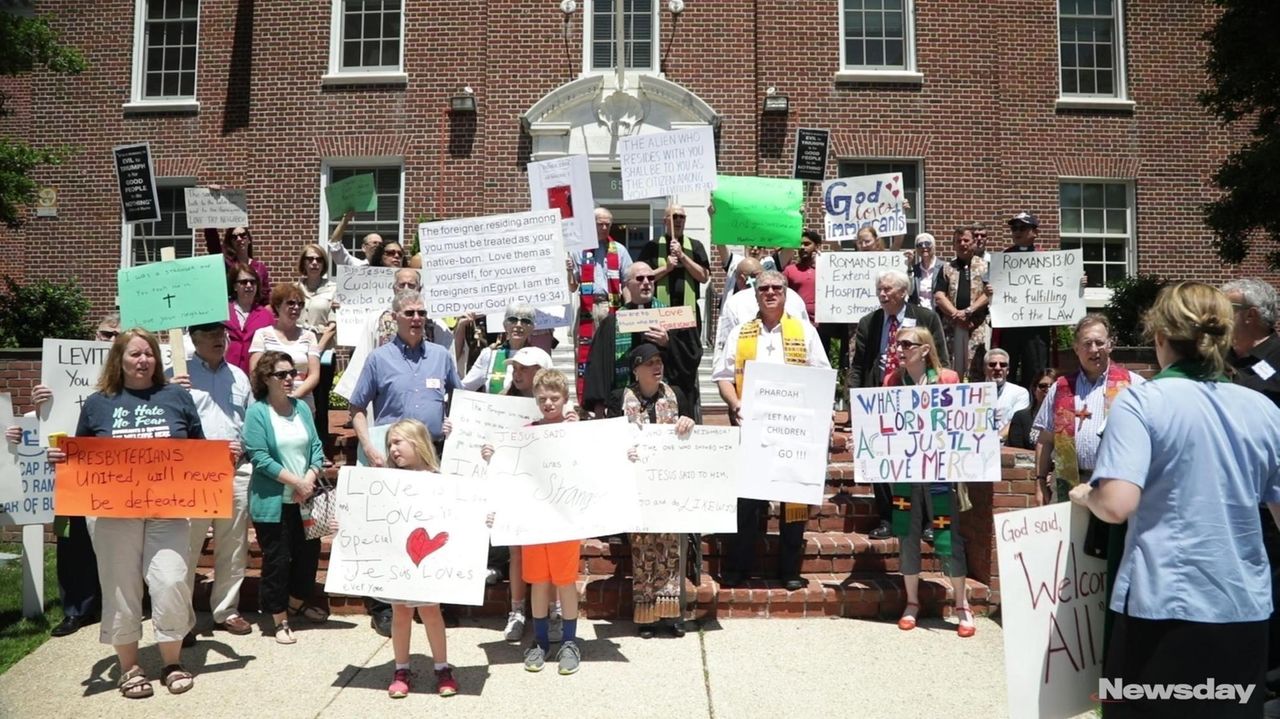 Clergy and lay commissioners attending the quarterly meeting of the Presbytery of Long Island marched on Tuesday from the Presbyterian Church of Islip to Town Hall to protest the ongoing crisis experienced by families and children at the U.S. border. Credit: Newsday / Yeong-Ung Yang

“These are hostile players,” Kosowski, 54, said of the seven countries listed in the ban. “You have to vet people. It’s just common sense.”

For Nayyar Imam, president of the Long Island Muslim Alliance, the high court’s 5-4 ruling had him fearing for the future and realizing how much has changed in the United States since he arrived in the 1980s.

“This is not the country I came to 36 years ago,” said Imam, 63. “I worry about my children and grandchildren living in this country.”

The two Long Islanders expressed views that couldn’t be further apart but were shared by so many others in response to Tuesday’s landmark ruling.

Long Island immigrant rights groups and other area opponents of the policy blasted the decision as a failure of the high court to check the power of a president they believe is driven by ethnic animosity.

Supporters of Trump in the area saw the court’s affirmation of the ban as a clear-eyed expression of lessons learned from 9/11.

Opponents are just more examples of an obsession on the left with bringing down Trump, they said.

“They want to oppose Trump at all costs, at every second,” said John Jay LaValle, chairman of the Suffolk County Republican Party, “and it backfired.”

The policy, LaValle said, is an appropriate correction to the inadequate measures that preceded it.

“Hopefully not too many bad guys got into this country while we waited for this policy to be approved,” he said.

Opponents, clearly spurred by the decision, sprang into action Tuesday across Long Island and beyond.

Several groups, including the American Civil Liberties Union and the National Immigration Law Center, held a news conference to assert they will fight the decision in the courts, legislatures and in another type of court — the one of public opinion.

“This travel ban places a hardship on families who are still divided,” said Malik Nadeem Abid, of Valley Stream, the New York chapter president of the California-based American Muslim Voice Foundation. “They will have a harder time getting closer.”

He said the travel ban discourages immigrants here in the United States from traveling abroad to these countries, as it raises worries about being allowed back in.

Beyond that, Abid does not believe the policy makes this country safer.

If anything, he said, it may do the opposite.

“It portrays America as the enemy of the Muslim world, which is not true,” said Abid. “I personally believe these actions will promote extremism in Muslim countries.”

Opponents likened the policy to failed measures such as the internment of Japanese-Americans during World War II, and, more recently, the separation of children from parents caught at the U.S.-Mexico border.

“The Supreme Court’s latest decision enables him to continue blanket discrimination by banning Muslims and opens the door for new forms of discrimination,” said Juan Cartagen, president of the Manhattan-based LatinoJustice, in a statement.

The argument that Trump’s directive stemmed from prejudice and stereotyping was quickly dismissed by Barrett Psareas, of Hicksville, vice president of the Nassau County Civic Association and a proponent of tighter immigration laws.

“The people who the president feels are harmful to this nation come from particular nations,” said Psareas, 50. “If it was prejudice I think everybody would see it, not just some people.”

Travel ban: Key dates and decisionsPresident Donald Trump's travel ban was upheld by the Supreme Court on Tuesday after an 18-month battle in the legal system.