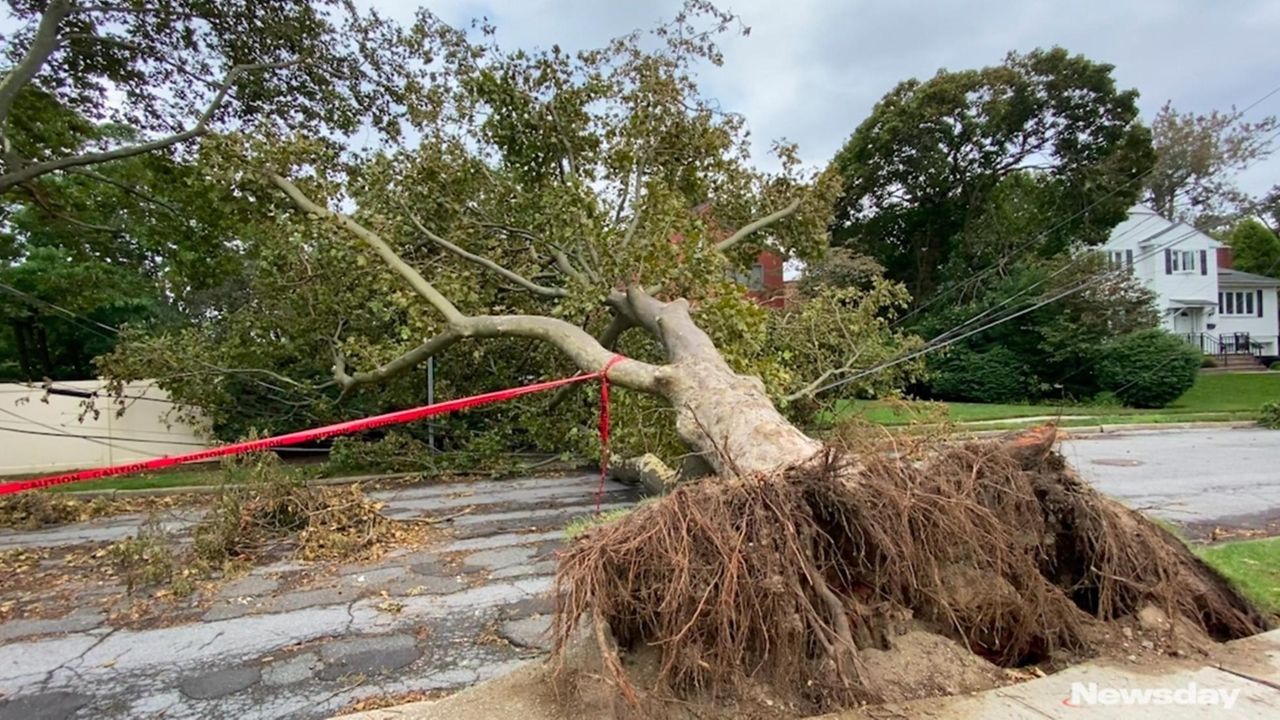 PSEG Long Island continued to face blistering criticism Friday as more than 100,000 customers faced another sweltering day without electricity and air conditioning, with the utility now saying restoration efforts from Tropical Storm Isaias could bleed into next week.

The utility had initially said 85% of its storm-affected customers would be restored by the end of day Friday. But as of 6:30 p.m. Friday, PSEG reported 104,000 customers without power, just 4,000 fewer than Thursday night.

PSEG Long Island president and chief operating officer Dan Eichhorn said the damage was more extensive than originally anticipated and that restoration efforts would now go beyond midnight Saturday — its previous target — and continue into Sunday, and “may spill over into Monday.”

Eichhorn said the utility continued to bring in workers from off Long Island, but said the final stage of work — restoring blocks of 20 to 500 customers — would take longer than expected.

One out-of-state utility worker was injured Friday morning while working on a power line that was not properly de-energized in Stony Brook, suffering "non life-threatening" injuries after coming into contact with the power line, Eichhorn said.

Meanwhile, the company's reported outage figures continue to be different from those on its website, which shows 213,291 outages as of 6:30 p.m. Friday.

Eichhorn said the map may include outages that occurred since Tuesday or duplicates if a customer called in an outage more than once. The company has made “some additional enhancements” to its systems in the past day, including rebooting its computer systems, “and we’re seeing much better performance today.”

PSEG spokesman Jeremy Walsh said Friday evening he could not comment on the condition on Meadow Road. 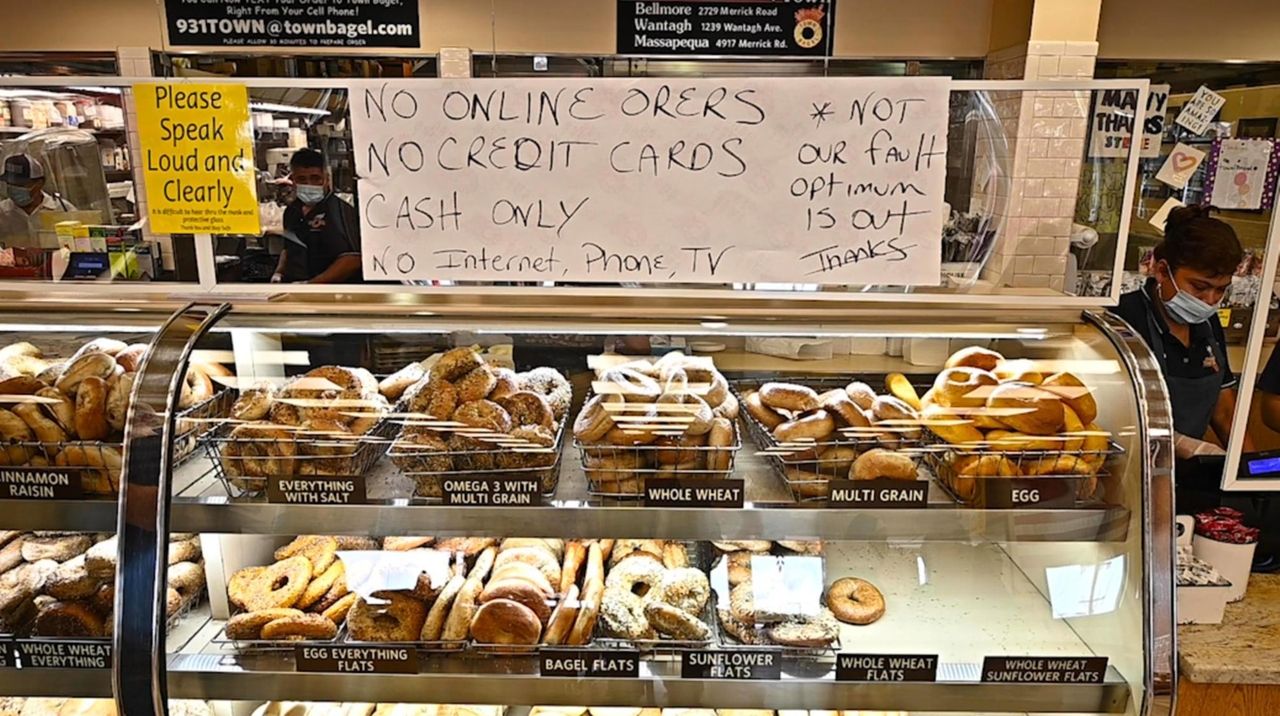 Long Islanders who have been waiting for the return of their power are losing hope, and patience.

James and Lisa Schlesinger of Roslyn Estates, both 90, require medical equipment, including an air mattress and surgical bed, to remain in their home, and are under the care of home health aides. They lost power on Tuesday and have received little information for days, said their daughter, Debra Weil. Their power is not expected back until late Saturday.

“PSEG has been totally useless,” said Weil, adding that a local synagogue provided a generator for one room of electricity. “The text messages we were instructed to send were bounced back. The phone lines were constantly busy.”

U.S. Sen. Chuck Schumer (D-N.Y.) said he spoke with Eichhorn Friday to demand answers on what is being done to address the outages.

“Long Islanders are rightfully frustrated with what is going on right now with these lasting outages, and quite frankly, so am I,” Schumer said. “Though crews on the ground are working hard, many Island customers are getting inaccurate, little, or no information at all about the ongoing situation and that needs to change."

Long Islanders continued to bombard PSEG on Friday seeking answers on when their power would come on — with many complaining about an inability to receive concrete information.

Jason Katz, 53, of Plainview, said his wife got a text message from PSEG that electricity would be restored by Sunday night. When Katz checked the PSEG website, it said service was expected Monday.

“I can’t work from home because there’s no power,” said Katz, an attorney in Islandia. “… it’s frustrating. You come home to a dark house and eat with a flashlight.”

Nassau County Executive Laura Curran said she met Friday with a representative of the Public Service Commission to convey her frustration.

"I think we all understand that power outages do come after a storm, but there has really been an across-the-board colossal failure in communication," Curran said at a news briefing.

But Eichhorn continued to defend PSEG's performance, noting that customers were without power for upward of 20 days after superstorm Sandy.

“I’m not minimizing it. We recognize it’s not good to not have your power," he said. “People being out for 72 hours; some will be out for another 48 hours … But when we look at the amount of damage, the amount of work that’s been completed, it’s been extremely productive."

Lawrence Buchman of Rockville Centre said while he had seen PSEG crews, none were able to help after a pole in his yard with a transformer snapped, causing sparks and flames. Although as many as four PSEG workers came to survey the damage, nothing had been done to fix it because, Buchman said, he was told "this may be a Verizon pole and PSEG won’t touch it."

Verizon told Buchman they could get workers to him sometime next week, he said.

Town officials, meanwhile, described a staggering mess that would take days to clean up. An estimated 3,000 trees or limbs fell at the height of Tuesday's storm — many tangled with live power lines — while dozens of traffic lights across the region are still inoperable.

In Babylon Town, spokesman Kevin Bonner said “major tree cleanup is on track to be completed by the end of the day [Saturday].”

Smithtown workers have cleared most town roads, town spokeswoman Nicole Garguilo said. “They’re going to work through the weekend and they’re going to keep at it until every last tree trunk is picked up,” she said.

Holly Gordon, who lives in the all-electric Sunscape town house community in Bay Shore, said ratepayers, most in their 70s, were at their wits end.“With no air-conditioning, bedroom temperatures are in the upper 80s,” she wrote Friday. “This is not healthy. I think we are invisible or at least too insignificant to matter to PSEG.”

PSEG Spokeswoman Ashley Chauvin said the utility got through to Gordon on Friday.

LI businesses cope with lingering phone, internet issues after stormSome businesses across Long Island say they are coping with lingering phone and internet connection ... Post-storm life — No power but plenty of fallen treesFor many Long Islanders, Thursday meant another day of waiting as they remained without power while hazardous lines as well as large chunks of trees cluttered neighborhood streets. Storm damage: Who pays when a tree falls on your house?Local insurance experts — including a broker, adjuster and attorney — offer tips on what to do about damage from the storm. LIPA to launch independent review of PSEG LI performanceThe move comes amid "unacceptable" problems for customers in reporting outages after Isaias and in finding out when they'll be restored, LIPA says.