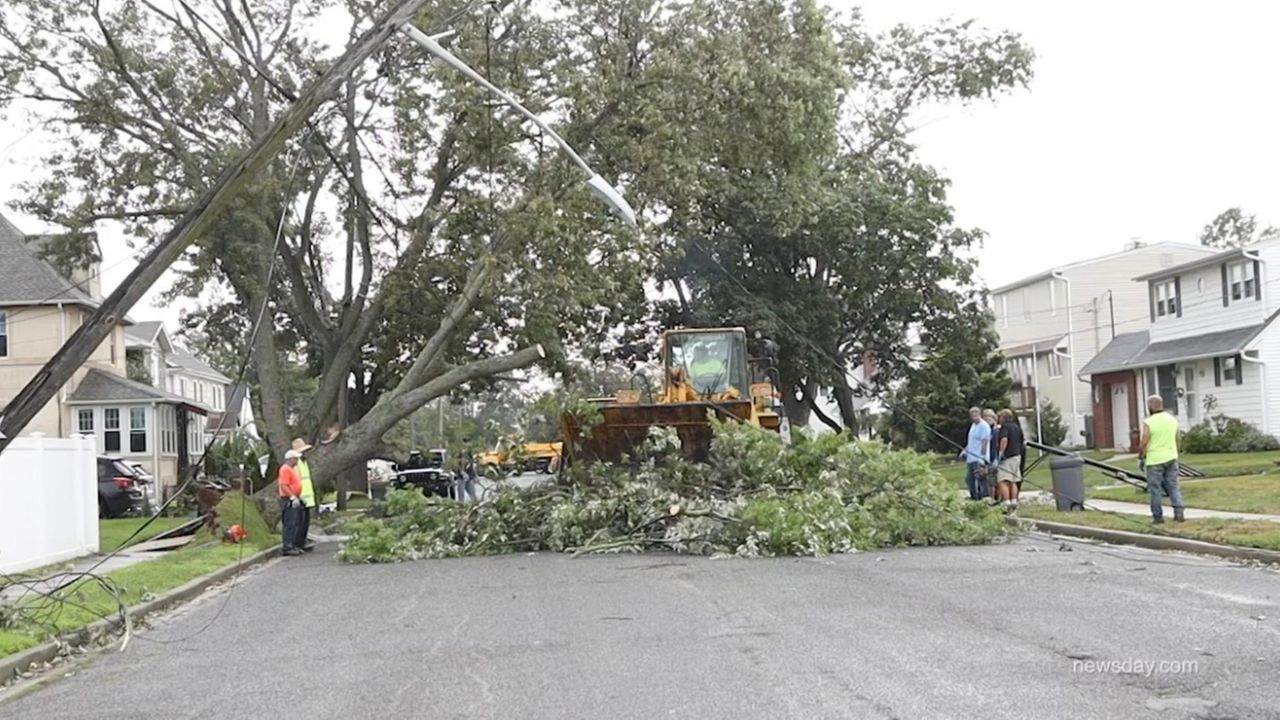 Fewer than 108,000 PSEG Long Island customers were still without power as of late Thursday. Some Long Islanders said they’re frustrated with the inability to get in touch with PSEG, but the company’s president says communications issues have not hampered restoration efforts. Credit: Newsday / Cecilia Dowd; Howard Schnapp

PSEG Long Island crews continued to work to restore power, as tens of thousands of frustrated customers endured a third consecutive night in the dark, their yards and roads littered with downed power lines, fallen trees and debris.

The utility made progress in restoring power to more than 70% of the 440,000 customers who lost electricity during Tropical Storm Isaias — the most since superstorm Sandy in 2012.

Although PSEG said late Thursday that about 108,000 customers were without power, that was little solace to the Long Islanders still stuck with no electricity or air conditioning.

Elderly residents with medical problems and the parents of children with health concerns continued to bombard the utility, seeking answers on when their power would come on — with many complaining they've been unable to receive concrete information.

“This is really a horrible situation," said Judy Ulberg, whose Bellmore home on April Lane has been without power since Tuesday and is not expected to be restored until Saturday. "You’re relying on a company that should have been prepared, and they’re not.”

The Long Island Power Authority said late Thursday that it had hired an outside firm to conduct an independent review of PSEG’s response to the storm, which LIPA's chief executive called “unacceptable.” PSEG manages the LIPA grid under a long-term contract.

County and town officials, meanwhile, described a staggering mess that will take days to clean up. An estimated 3,000 trees or limbs are scattered throughout the region — many tangled with live power lines — and dozens of traffic lights across Nassau and Suffolk were still inoperable.

"It’s an overwhelming situation," said Babylon Village Mayor Ralph Scordino, who was waiting on PSEG to clear six locations where trees had taken down power lines.

Progress, but not fast enough

With additional high-voltage line workers trickling onto Long Island to help, PSEG said it expects 85% of customers will have power restored by the end of the day Friday, with the remainder back by midnight Saturday.

“We ask for your patience,” said PSEG Long Island president and chief operating officer Dan Eichhorn, who defended the utility's performance amid an avalanche of complaints and calls for investigations.

Eichhorn said the company’s decision to call in 2,500 workers last weekend, and have many on the ground by Tuesday, helped expedite what could have been a more difficult restoration. Additional crews from Michigan, Kentucky, Ohio and Florida are on their way, he said.

“Our preplanning efforts really saved us here,” he said. “If we didn’t make that decision … we would have been in a world of hurt now."

But the lights can't come on fast enough for Richard Vitagliano of Levittown, who is ill and living at home without electricity, his daughter said.

“He’s having a hard time breathing,” Phyllis Kelly said of her father, who also experienced an extended outage during Sandy.

The problems extended to New York City, where 56,000 Con Edison customers remained in the dark Thursday, down from 180,000 at the peak of the storm.

"We just can’t have people wait that long. It’s not fair," he said.

New Yorkers were not alone in their power woes. In Connecticut, 590,036 customers remained out of power statewide Thursday, with utility Eversource saying it hoped to restore the bulk of outages by the end of the weekend.

While many Long Islanders complained about the pace of restoration, others were outraged about their inability to report an outage — or even receive a general estimate of when it may be restored.

“The one time I got a person on the phone, our conversation was followed by a test from PSEG advising a home on a different street was now registered to my account,” said Gary Fortman of Huntington.

For two days, downed trees with live wires have blocked access to Fortman's roadway, but the PSEG map doesn’t show his outage. After several attempts to get PSEG to resolve it, he and several neighbors put up signs and were blocking traffic onto his road.

“I’m just not even sure PSEG even knows we have this problem on our street," he said.

Eichhorn said the utility has made improvements with its communications, but “we know it’s not 100% there. It’s not the experience our customers on Long Island deserve.”

He said high call volumes — the utility is still fielding about 6,000 calls an hour from customers — had impacted the company’s ability to respond to phone, text and emailed messages. “We’re not happy with what’s happened,” he said.

But even the company's public-facing outage map continues to report outdated information, including 100,000 more outages than Eichhorn has indicated.

“We have a lot of people working on it,” Eichhorn said.

The Nassau Legislature announced that it would hold an Aug. 13 hearing to review the performance of PSEG and other county first responders.

“People are still being affected by it," said Legis. Denise Ford, a Long Beach Democrat who caucuses with Republicans. "They’re upset. They don’t know when they are going to be restored.”

The move comes amid a series of demands by public officials for investigations.

Cuomo Thursday said it was the utility's job to prevent damage during the storm and quickly conduct repairs afterward.

"That's why we pay them," Cuomo said. "We pay them to provide a service. The service they provide is when it's sunny out, everything works. The service is also anticipating a storm; anticipating the issue and making sure people don't lose power when a storm comes."

The state, Cuomo said, was paying 7,000 municipal workers to supplement the emergency response.

"I'm not in the business of providing utility service," he said. "That's their business so we have to call out state employees to do this. That further aggravates the situation."

Eichhorn said the company would cooperate with investigators.

A 'punch in the gut'

Across the region, widespread damage was reported from Tuesday's fast-moving but powerful storm.

“Driving at night is a risk people should not take if they can avoid,” said Smithtown Town spokeswoman Nicole Garguilo.

Nassau County Executive Laura Curran said 1,500 trees were felled in the storm, forcing the partial closure of many county roads where PSEG wires are intertwined with debris.

“The amount of debris in the county is mountainous,” she said.

There was progress on other fronts.

The Long Island Rail Road, which shut down service during Isaias, restored the last of its storm-related service suspensions early Thursday.

The cleanup was equally staggering in Suffolk, where downed trees and wires played havoc on frazzled motorists.

After months of struggling to contain the coronavirus pandemic and its economic fallout, Isaias was an unwelcome addition to 2020, said Suffolk County Executive Steve Bellone.

The storm, he said, was “another punch in the gut to a community and people already in crisis in many ways.”

PSEG Long Island worked through the night and has restored service to about 300,000 customers affected by Tropical Storm

Isaias, which was one of the strongest to hit the area in years.

What to do about storm damage to yard, treesHere's a few tips on how to recover from Tropical Storm Isaias. Post-storm life — No power but plenty of fallen treesFor many Long Islanders, Thursday meant another day of waiting as they remained without power while hazardous lines as well as large chunks of trees cluttered neighborhood streets. Up to 25 named storms, hurricanes forecast for season by scientistsLong Island and the rest of the Eastern Seaboard can expect a total of 19 to 25 named storms and hurricanes, up from the 13 to 19 predicted in May, federal scientists said. Small businesses reeling from pandemic now coping with power outageLocal business owners say outages of power, telephone and internet service have stalled daily commerce.