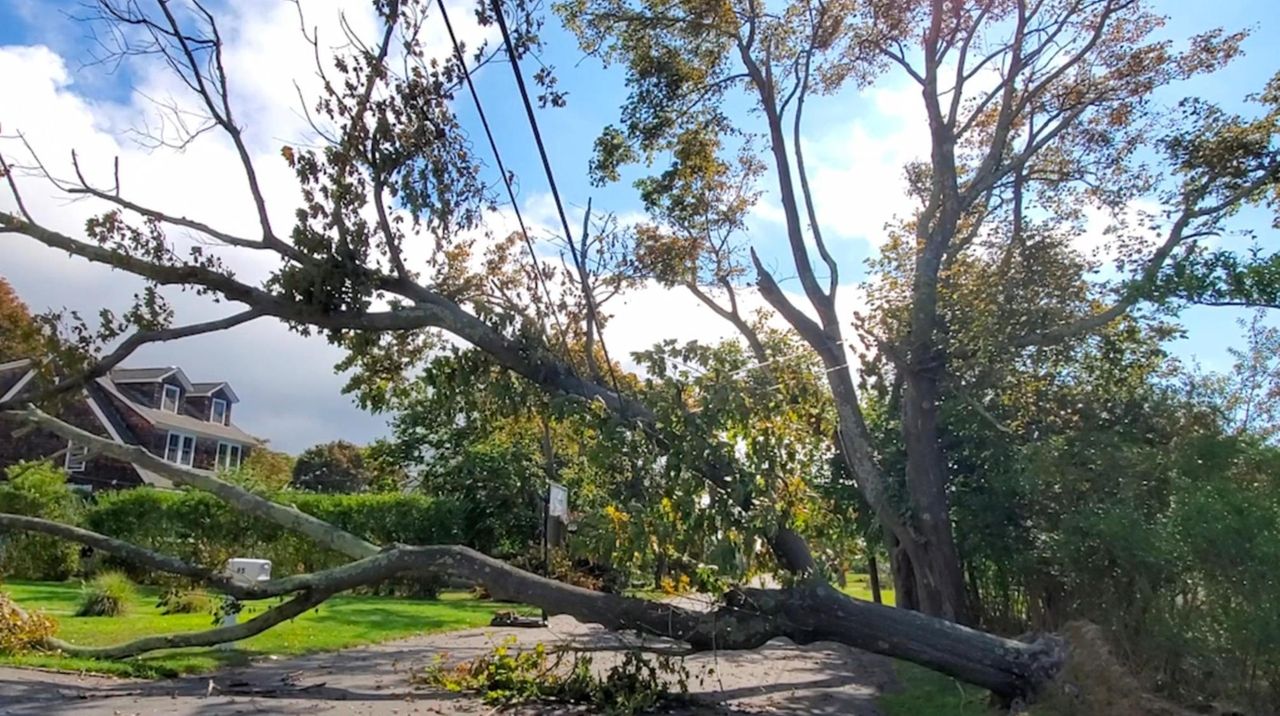 Many Long Islanders are still without power and in East Moriches some residents are upset about the lack of communication with PSEG LI. Credit: Newsday, James Carbone, and Debbie Egan-Chin / John Paraskevas and J. Conrad Williams Jr.

PSEG Long Island’s president on Saturday acknowledged that the utility failed to keep many of its customers adequately informed in the wake of the 420,000 power outages caused by Tropical Storm Isaias and said some of the tens of thousands of residents still without electricity may not get it back until Monday.

“We’re extremely disappointed in the experience that we provided to customers in the communications area … ,” the utility’s president and chief operating officer, Dan Eichhorn, said. “We’ll do a full investigation. We’ll understand why those communications issues existed. It did make it difficult for customers to receive estimated time of arrivals.”

As of 8 p.m. Saturday, about 60,000 customers remained without power, PSEG said.

Suffolk County Legis. Robert Trotta (R-Fort Salonga) said his biggest issue with PSEG has been that “they’re not telling the truth” about the date when people can expect their power to be restored.

“People are making decisions based upon what they’re being told by this company,” said Trotta, who hadn't yet had his power restored in Kings Park. Trotta said that dangling wires from utility poles could still be seen on his street Saturday.

“There needs to be a change at the top,” Trotta said when asked what should be done before the next storm. “I don’t want to blame anybody, but you have to blame the guy at the top. The guy who’s on TV telling you this is going to be done in 48 hours.”

Eichhorn acknowledged that the utility has miscalculated repair times before and might have to revise them again. Even though PSEG's goal is restore all service by midnight Sunday, some repairs might bleed into Monday, he said.

The problem, he said, is that the damage was so much greater from Isaias than from other storms, with, for example, multiple trees down on a single street, rather than just one. That means more extensive restoration work and repair-time predictions that sometimes end up being wrong. 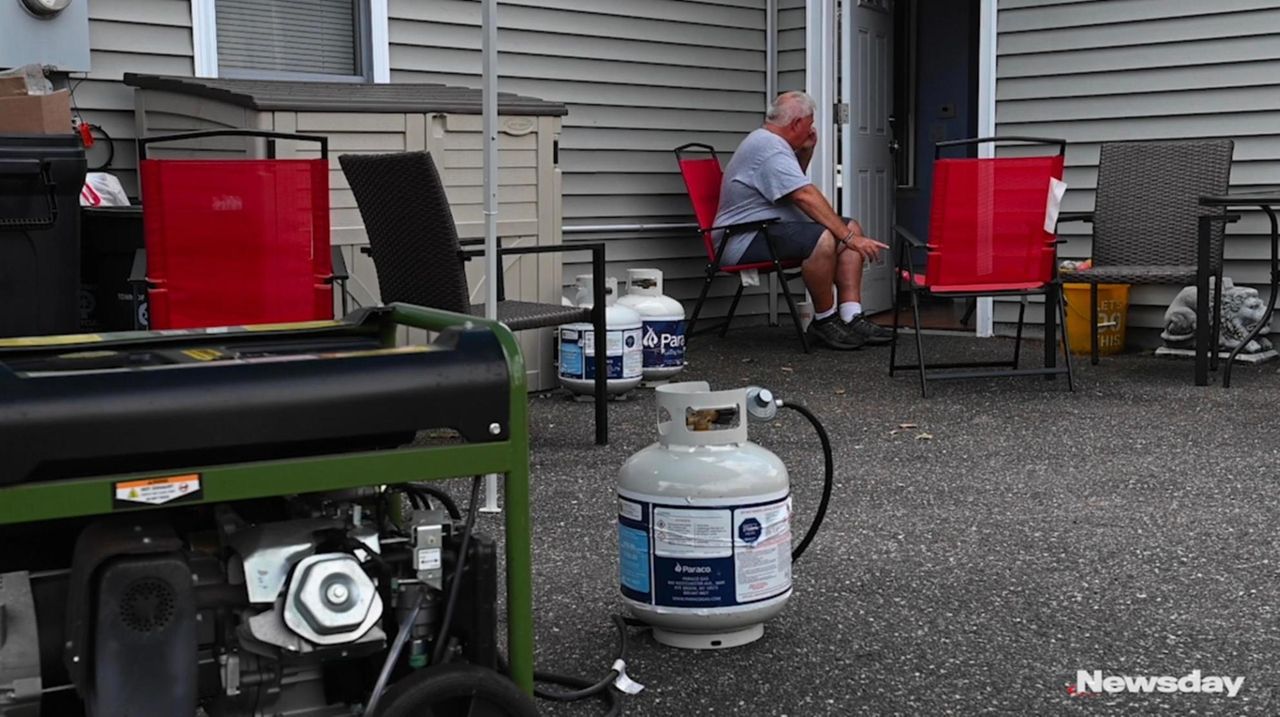 Still without power after Isaias For one Levittown family, getting the power back means more than just turning the lights on, it's a matter of survival. Newsday's Steve Langford has the story. Credit: Newsday / Steve Pfost

Eichhorn said 300 additional line workers were on their way to Long Island to complement the 3,000 line workers and 1,000 tree personnel already working 16-hour shifts around the clock on the Island.

"We will continue to request and search for more," he said, "We want to make sure we do everything possible to meet our commitment to get customers back by ... [Sunday] at midnight.”

Meanwhile, the company's reported outage figures continue to be different from those on its website, which showed 130,074 outages as of 7:29 p.m. Saturday.

In a statement Saturday, the utility said that "power restoration is progressing faster than can be displayed on the outage map. The map will continue to fluctuate as we refine the data."

The dots on the outage map denote in some cases thousands of customers who have spent days without lights, without air conditioning and without electricity to charge their phones, run medical devices and power their refrigerators.

Lines down, frustrations up

Stefanie Werner said the roads near her East Setauket home were cleared of downed tree limbs Friday, but that damaged power lines could still be seen throughout her neighborhood.

By Saturday, Werner said the food in her fridge had begun to spoil.

“We cleaned out the fridge and most of the freezer this morning — it’s all gone,” Werner said. “We’re kind of existing on takeout and short trips in the car every once in a while, to cool down with the AC and make phone calls.”

Werner’s frustration was directed at PSEG, she said, for “constantly pushing back the date we can expect power back on.” She was first told her electricity would return on Thursday, but the company has since postponed that date two times, she said.

“How do they not have a date yet? I’m disgusted,” Werner said. “We had service restored quicker after superstorm Sandy in this neighborhood.”

James Schlesinger, 90, and his wife Lisa Schlesinger, 89, of Roslyn Estates, who need electricity for medical devices — including a medical-grade air mattress and oxygen-delivery device — finally had their power restored Friday night after losing it on Tuesday, said daughter Debra Weil, 60, of Forest Hills, Queens.

“PSEG has been totally useless,” Weil said. “The text messages we were instructed to send were bounced back. The phone lines were constantly busy.”

Her parents are signed up on a list of people with medical conditions whom PSEG is supposed to prioritize during outages, she said. But “if this is priority, I would hate to think what would be going on if they weren’t priority,” she said.

State Sen. James Gaughran’s office has received "hundreds of calls" from frustrated residents, said spokeswoman Marissa Espinoza. "They can’t get through to PSEG so they’re calling us."

Espinoza said Gaughran (D-Northport) is working on legislation with Assemb. Fred W. Thiele Jr. (I-Sag Harbor) that would give the state Public Service Commission power to "hold PSEG accountable" through fines and other measures.

PSEG isn't the only company under fire for its response to storm-related outages.

George Markides and his wife, Marilyn, of Lynbrook, had their electricity restored after a day, but they have been without internet service since Tuesday. The couple said they’ve tried calling Altice, their cable, phone and internet provider, but hear a repeated automated message unrelated to the tropical storm, and haven’t been able to report their problem.

“We went through [superstorm] Sandy and never had this problem. You would at least hear from someone,” said Markides, 80. “It’s been days and we haven’t heard a thing from them. It’s very disturbing.”

Lisa Anselmo, a spokeswoman for Altice, which operates Optimum, said that Altice can’t restore internet and television service until electricity is restored. She said that starting Tuesday, the company had recorded phone messages noting the outages.

“Our call volume is high,” she said. “We’re doing our best to reach our customers.”

Verizon also has had outages. Spokesman Steve Van Dinter said he did not know the number of Long Islanders without service, but he said the company has been using mobile cell sites and portable generators to help restore service.

In New York City, which is served primarily by Con Edison, there were about 27,000 customers without power, Mitch Schwartz, spokesman for Mayor Bill de Blasio, said Saturday afternoon.

Long Island state parks also were hit hard by Isaias and some remained shut Saturday or only partially open as workers cleared away downed trees and waited for the power to be turned back on.

The parks that were closed Saturday were Caleb Smith, Valley Stream, Walt Whitman Birthplace and Wildwood.

With Matthew Chayes and Joan Gralla

PSEG Long Island said it opened six customer outreach centers on Saturday. The centers were scheduled to be open from 10 a.m. until 4 p.m. (or while supplies last), and provide people with free water and ice. To ensure physical distancing, the centers offer drive-through service.

Officials: Girl, 4, dies of injuries in Southampton crash
1:18
LI weather: Storm heads upstate after mostly sparing Long Island
Ex-truck maker tries again to build mini-storage facility in Fort Salonga
King spoke against racism in 1965 visit to Long Island
Wading River, a 'storybook suburbia,' draws homebuyers seeking room to grow
1:51
How race is taught in LI schools — and why some educators feel under siege
Didn’t find what you were looking for?