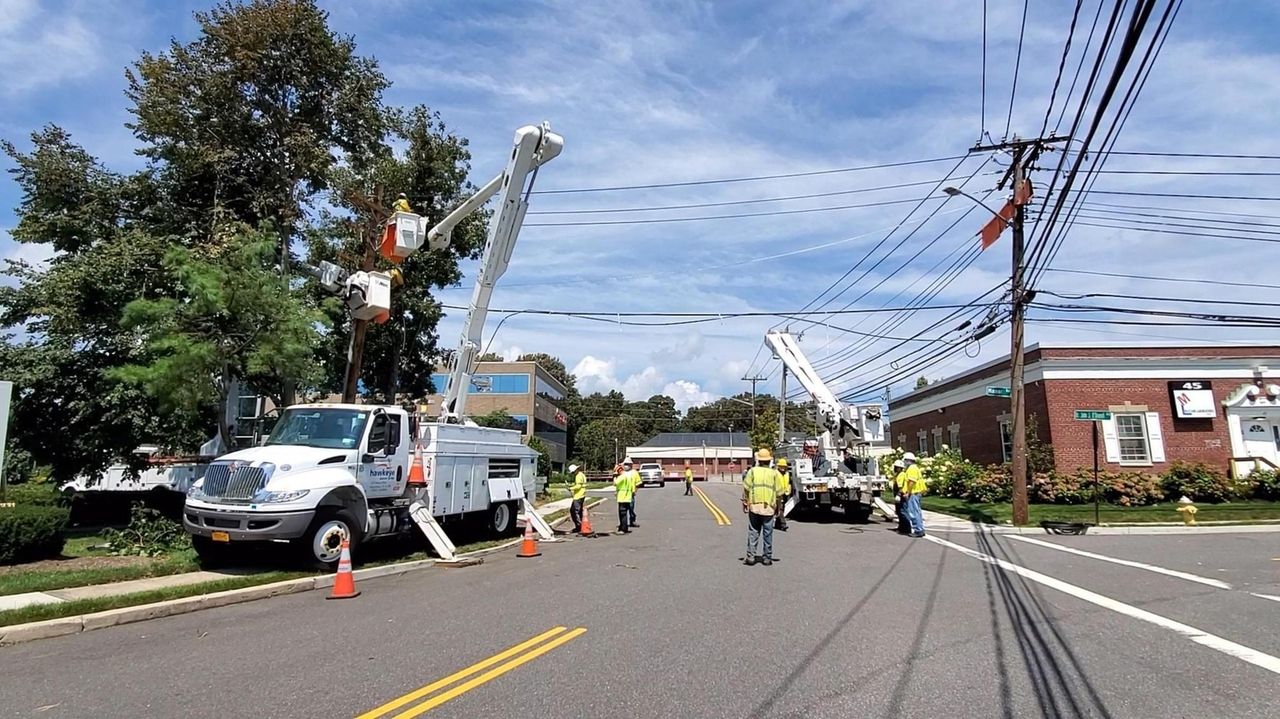 A week after Isaias struck LI, patience is waning for PSEG customers still without power. A Bethpage man on Tuesday said he is spending about $50 a day running a generator to keep his son’s insulin cold. Newsday's Cecilia Dowd reports. Credit: Newsday

More than 15,750 PSEG Long Island customers remained in the dark and without air conditioning Tuesday night, left pleading for assistance one week after powerful winds from Tropical Storm Isaias swept through the region.

As the restoration efforts entered its second week, PSEG confirmed Newsday reporting that the total number of outages from the storm and its aftermath may exceed 800,000 customers — nearly double what was originally reported.

PSEG said 15,754 customers were still without power as of Tuesday night, including around 1,900 who have been out since the Aug. 4 storm. The remainder includes outages that took place since the storm, some unrelated to Isaias, and others done intentionally to safely restore power, the utility said. The company said it would complete restorations Wednesday, using more than 6,100 line and tree-trim workers.

Meanwhile, with the National Weather Service warning of high heat and humidity this week, some of Long Island’s most vulnerable ratepayers appeared to be last on the list for restoration.

Ellie Meyrowitz, a 79-year-old Melville homeowner with severe macular degeneration and vision loss, thought she had an appointment with PSEG workers to fix her power Sunday, according to her daughter Stacey Udell.

But when Meyrowitz, who is on PSEG’s critical care list, called Saturday to confirm the date, she learned she was not scheduled to be restored Sunday. Partial power was eventually restored to the house, but air conditioning and other appliances still don't work.

"It’s a huge problem for her right now," said Udell, who is immune-compromised and can’t take her mother into her home during the coronavirus pandemic. "The heat exacerbates her condition."

The company has told Meyrowitz her power won’t be restored until Thursday, Udell said.

"They said that larger clusters of outages take precedence over a single residence without power, even if that residence is a medical priority," Udell said. "This is so infuriating and totally incomprehensible.”

PSEG continues to grapple with various estimates of the magnitude of the storm, noting that outages directly related to the storm probably numbered 420,000 but being less certain of internal estimates that the cumulative impact may be nearly twice that figure.

During a conference call with reporters Tuesday, PSEG Long Island president and chief operating officer Dan Eichhorn confirmed that an internal company document listed the total cumulative outages from the storm at upward of 800,000, including hundreds of thousands in the week since the storm hit.

In a subsequent call to Newsday, Eichhorn said he did not believe those reports, which put the total outages potentially as high as 975,000.

“We believe some of the [computer] issues could have introduced some error in that reporting,” he said.

PSEG has internal reports showing between 30,000 and 120,000 new outages each day since the storm, Eichhorn said.

As crews go out to restore outages, Eichhorn said they're discovering significant numbers of new power-related problems they have to address.

“That is definitely one of the reasons,” for the prolonged restoration, Eichhorn said, noting that new issues have also impacted the company’s ability to set estimated restoration times.

But Eichhorn conceded that customers are entitled to be frustrated with PSEG's outage reporting and communication systems, along with restoration times that have repeatedly been pushed back.

“Customers have spoken to us loud and clear,” he said. “We know we have to get better.”

PSEG said it was working to address the largest number of neighborhood outages Tuesday, and that individual service lines would be completed Wednesday.

Single-service outages tend to be the last electric service customers to be restored so the utility can get maximum results from dedicating crews to repair jobs first that will restore the most number of outages.

Bruce Baumgarten, a doctor from Syosset, is one of those single-service lines PSEG has yet to get to. Baumgarten said a downed power line was still arcing in his yard, which “looks like a lumber yard” from all the downed trees. His is the only home without power in his neighborhood.

Most frustrating for Baumgarten is that four PSEG trucks pulled up in front of his house Monday night.

“I told them, 'I have a live wire down. It’s sparking,'” he said. “They said they’d take care of it before they left.”

Hours later, he said, all four trucks left without entering in his yard.

The frustration has become palpable for some families.

Carl Dombrowski, 81, of Sayville, who twice survived leukemia and has heart problems, spent the past week in a home with indoor temperatures exceeding 85 degrees, said his son Stefan Dombrowski.

"He’s very stoic," said Stefan Dombrowski. "But the problem is, every time we get an update from PSEG, he banks on it, then it changes. It’s so difficult to plan."

"This is incredible. I am making a call to the New York State elder abuse hotline now to see if this is a reportable issue," he said. "I think it does indeed rise to the level of ‘reasonable suspicion’ of neglect of the health and welfare of an elderly person."

Lawmakers Tuesday continued to urge PSEG to change its policies and make homeowners, who lost power for extended periods of time, whole again.

Rep. Lee Zeldin (R-Shirley) sent a letter to PSEG urging the company to provide reimbursement to customers for spoiled food and lost medication.

"It's been very difficult with people working from home and the economic insecurity and being unable to connect," Curran said at a news conference in Manhasset on generator safety. "It is just frustration upon frustration."

Curran said many residents have rushed out to purchase generators but that the devices could pose a serious threat if not properly used.

On Saturday in South Farmingdale a homeowner without power filled a hot generator with gasoline, causing vapors to be ignited and sparking a serious fire, she said. No one was injured but the property was destroyed, Curran said.

Nassau Assistant Chief Fire Marshal Michael Uttaro said residents should never fill up a generator that is running, hot, or in an enclosed or indoor space.

Even customers who have had their power restored remain flabbergasted at the cause of the outage.

For Marc Williams of Westbury, getting power back after a week out involved surprisingly little work.

"The verdict was a breaker switch that just had to be flipped," he said. "It took the guy all of two minutes to fix."

PSEG Long Island will open five customer outreach centers Tuesday. These centers will be open from 10 a.m. until 4 p.m. (or while supplies last), and provide people with free water and ice. To ensure physical distancing is maintained, these centers will offer drive-through service.

The centers will be at the following locations:

Curran, lawmakers call on PSEG to reimburse for foodThe Nassau County executive and six Long Island state senators want the utility company to reimburse residents for perishable food and medication lost from going nearly a week without power. Number of outages has been hard to pin downPSEG's outage map and press releases have given different numbers throughout the cleanup. The reasons are complicated.