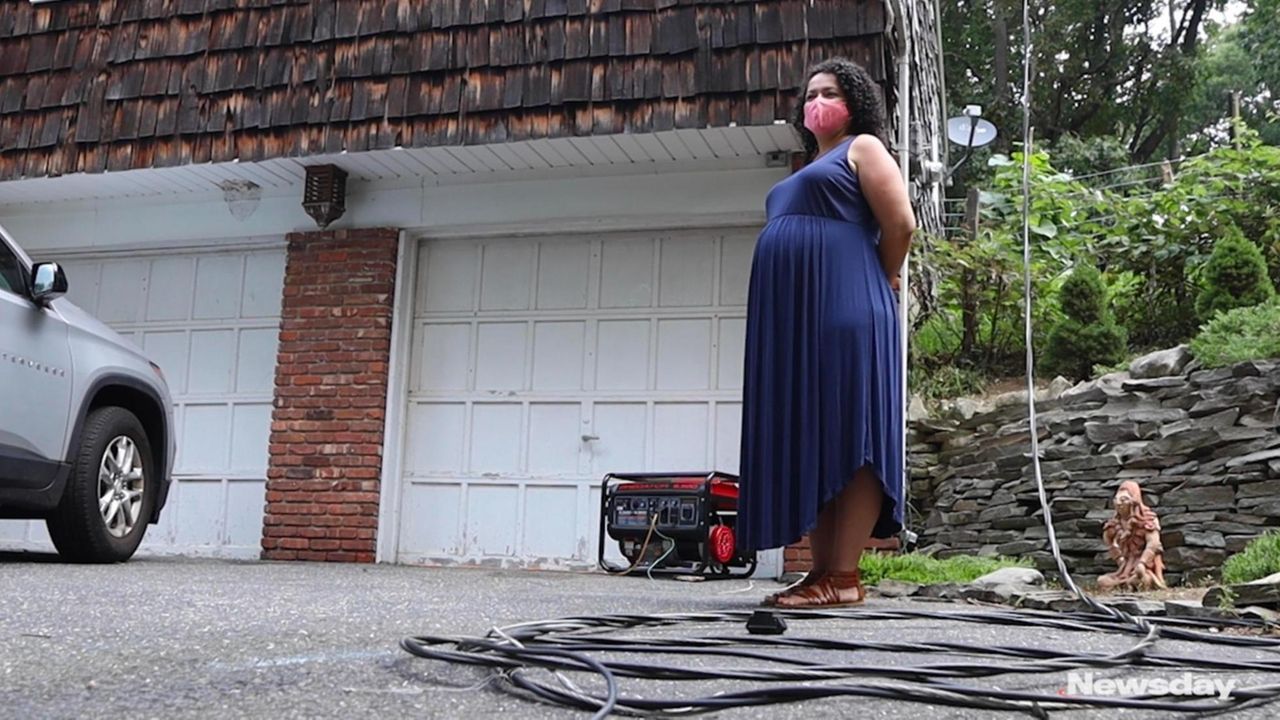 More than a week after Tropical Storm Isaias hit Long Island most residents have gotten their power back, but many say it wasn't soon enough. Newsday's Cecilia Dowd has the story.  Credit: Howard Schnapp

All PSEG Long Island customers who lost power as Tropical Storm Isaias swept through the region Aug. 4 were restored Wednesday night, providing relief for residents who spent more than eight days in the dark, sweating and throwing out spoiled food.

The number of customers who lost power after the storm, due to weather, intentional outages done for safe repair, and other electrical issues, went from 9,000 to 500 Wednesday night, the utility said.

PSEG chief operating officer Dan Eichhorn had promised Wednesday afternoon that every customer who lost power during Isaias would be back by midnight, saying, “Our ideal is to get everybody back by midnight.”

The utility's outage map Wednesday night showed another 4,980 customers out of power, mostly due to stormy weather that moved through Long Island Wednesday afternoon.

Suffolk County Executive Steve Bellone said while it was "good news" that power was finally being restored for many, it's little solace for those who had been in the dark for more than a week.

PSEG, he said, must know “what went wrong with the communication system, what the breakdown was … and not only identify it, but put forward the solutions for that happening again."

Rebecca Gutierrez of Huntington, who is nine months pregnant with her third child, finally had her power restored late Wednesday afternoon. She said the heat inside her home has been "unbearable."

Gutierrez, who is due Aug. 22, had been pleading with the utility to get her power restored but was told she was the "lowest priority" because her home on Cuba Hill Road was the only one in the area without service. One PSEG agent, she said, told her to stay with friends or a neighbor — a move Gutierrez rejected as her family is still quarantining because of COVID-19.

"It is really stressful," said Gutierrez at a news conference Wednesday with State Sen. Jim Gaughran (D-Northport). "They are aware of my situation. But I feel they don't value their customers. It's not a priority for them."

Gaughran called PSEG's actions "unconscionable" and said Gutierrez, along with those on PSEG's Critical Care list of medically vulnerable individuals, should have been prioritized for expedited restoration.

"Having no power and no air conditioning is a real extenuating circumstance that you would think PSEG would put at the top of the list," he said, calling for the firing of Eichhorn and LIPA chief executive Tom Falcone. "This is a disgrace and it needs to end."

Gaughran said he was writing legislation that would strip LIPA of oversight over PSEG's storm management planning and preparation, giving the authority to the state Public Service Commission.

Eichhorn said the Critical Care list was aimed at ensuring that medically vulnerable customers were safe if an outage hits, including providing them early warning of incoming storms and making calls afterward to check on their welfare. Although the utility had tried to prioritize their restoration, he said higher priority was provided to locations such as hospitals.

“I’m pretty proud of the restoration efforts from our team," Eichhorn said. "We had IT issues that definitely caused some frustration from our customers. We’ll take a look at that.”

And while some customers continue to register complaints about PSEG systems, including the accuracy of restoration times, Eichhorn said he believed the online outage map and texting system were now working correctly.

PSEG finally arrived Wednesday to restore power to Carl Dombrowski, an 81-year-old Sayville resident who has been in his dark, 85-degree home for more than a week.

"I hope some good comes of this debacle, for him and others," said his son, Stefan Dombrowski.

Andrea Biblow, and her daughter, Lucy, 18, of Beal Court in Huntington, also breathed a sigh of relief Wednesday as their power was restored. The Biblows spent the past eight days using a generator to keep their fridge cold and without air conditioning during this weeks hot days.

Her message to the utility: "get it together before hurricane season is really upon us."

Getting power back isn’t a guarantee that it’s going to stay on.

Susan Tito Gerstein of Smithtown said she got power back Sunday, only to lose it again Wednesday. PSEG told her the power would be back by midnight. But after losing hundreds of dollars in food — and replenishing with hundreds more — she’s had enough.

“It’s frustrating as hell,” she said.

Alex Chisholm, 76, a retired city custodial engineer, returned Aug. 6 from his vacation home in the Adirondacks to find a live wire stretched head-high across his backyard in Levittown.

Chisholm figured he and his wife were better off than some without power but was nervous.

“Some neighborhood kid comes into the yard, he’s fried,” said Chisholm, who was told he must hire an electrician to remove the wire.

'Put through the ringer'

“I want fair and just compensation for the hundreds of thousands of Long Islanders who have suffered and been put through the ringer by PSEG,” Curran said.

Eichhorn Wednesday defended company investments such as the $250 million ratepayers are spending for new smart meters, which automatically alerts PSEG of individual outages. Around 600,000 of LIPA’s 1.1 million customers already have them.

He said customers whose power were down would not be billed for usage, but said no decision has been made about providing reimbursement for food or medicine — or even forgiving the 36-cents per day service charge all customers pay, with or without service.

Altice, which provides Optimum-branded service throughout the region, said less than 1% of its customers remain without service as of Wednesday evening. The company will automatically credit customers who lost service during power outages, said Altice spokeswoman Lisa Anselmo.

There’s still no estimate on how much the storm will cost ratepayers. Past storms have costs tens of millions, or more. The federal government reimbursed LIPA for more than $700 million in Superstorm Sandy-related damages, and paid another $730 million in storm hardening.

PSEG Long Island will open five customer outreach centers Wednesday. The centers will be open from 10 a.m. to 4 p.m. (or while supplies last), and provide free water and ice. To ensure physical distancing, the centers will offer drive-through service.

The locations open Wednesday are:

Number of outages has been hard to pin downPSEG's outage map and press releases have given different numbers throughout the cleanup. The reasons are complicated. Cuomo's threat to boot PSEG from LI hits snagsPSEG Long Island has a contract rather than a franchise agreement to operate the Island's electric grid. Curran, lawmakers call on PSEG to reimburse for foodThe Nassau County executive and six Long Island state senators want the utility company to reimburse residents for perishable food and medication lost from going nearly a week without power.