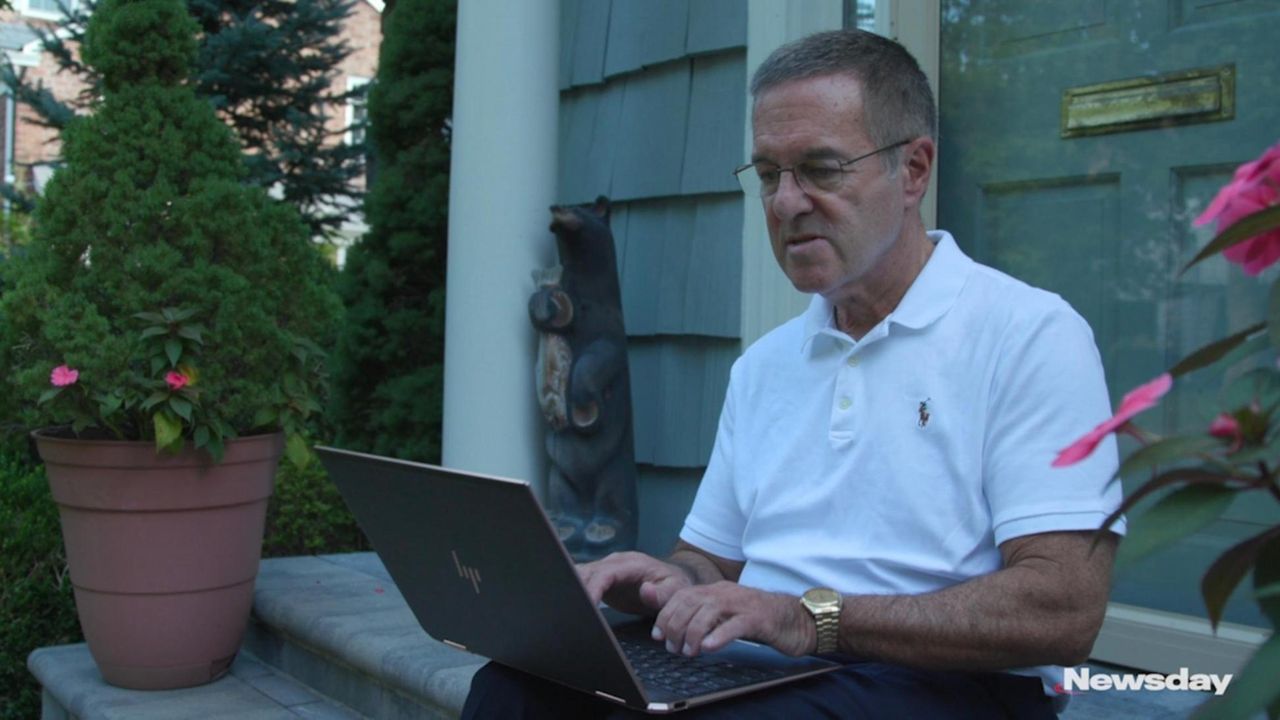 Mark Bunim of Great Neck told Newsday on Friday, he never lost power during Isaias, but he had no Optimum service for 11 days.  Credit: Kendall Rodriguez

PSEG Long Island president Dan Eichhorn said Friday the company has wrapped up much of its work restoring the damage caused by Tropical Storm Isaias, and, despite a tidal wave of criticism from lawmakers and residents, the utility was prepared for the next major storm.

Meanwhile, 773 customers who lost power in the days after Isaias remained in the dark as of 8:45 p.m. Friday, according to the PSEG outage map.

“The system is pretty much back to normal configuration,” Eichhorn said.

Some out-of-town workers will remain over the next week or two to make permanent some temporary fixes and to respond to any new outages, but most off-Island crews have been released, he said.

And Eichhorn contends PSEG is ready to respond to the next major weather event.

Telecom systems that broke down shortly after the storm have seen their capacity expanded, and digital communication systems for online, text and mobile-app reporting have been beefed up, he said. During the storm, some calls were routed to PSE&G in New Jersey — PSEG’s sister utility — and workers there were able to email outage reports to the Long Island operations center.

That’s “an option that we are exploring,” he said.

At a news briefing Friday, Gov. Andrew M. Cuomo said PSEG's progress was "too little too late as far as I’m concerned."

Eichhorn announced Wednesday that all 420,000 customers who lost power during Isaias had been restored.

Crews often found there was considerably more work at each job than was expected, and each of those jobs took considerably longer than was typical. The result, he said, was that work backed up and restoration times got pushed back.

“The work that came in on days two, three, four and five was significantly greater than in other storms we experienced,” Eichhorn said. “There was so much more work and that really had an impact.”

A total of 6,500 field workers were put to work by PSEG after the storm, responding to 8,350 “tree jobs,” where limbs or entire trees fell onto wires and had to be removed. They replaced 75 miles of wire, 853 transformers, 832 utility poles and eight larger transmission poles, Eichhorn said.

He said PSEG workers and field crews “put their heart and soul into this restoration.”

But he conceded “we’re not happy with what happened at all. There’s a lot of disappointment across the board.”

Paul and Elizabeth Mullady of Mount Sinai lost power for a week after the storm hit. Promises to restore the power kept getting pushed back until they enlisted the help of Assemb. Steve Englebright (D-Setauket).

“The feeling is that if you don’t have a generator, you’re out of luck,” Paul Mullady said. “I’ve already ordered one. We’re both 73. We have a couple of refrigerators. That food is very important to us.”

He added, “If you can’t rely on PSEG you have to rely on yourself. I feel like one of those guys in West Virginia. A survivalist.”

The toll on some seniors

At a news conference in Mineola Friday, Nassau Legis. Josh Lafazan, an Independent from Woodbury who caucuses with Democrats, introduced legislation requiring all new senior housing developments built after April 2021 to install and maintain standby generators.

"This gap, from when the power goes out, and the utility restores power, is crucial," Lafazan said. "This gap is when medical devices that our seniors rely on stop working. This gap is when critical perishable medicine for our seniors may no longer be refrigerated and may spoil."

Woodbury Gardens Senior Apartments lost power to 12 of 19 buildings for four days, board members said. Roughly 175 residents, most over the age of 80, were without the use of stair lifts, land lines, air conditioning, stoves and refrigerators.

"They can't survive with no power and no land line," said Don Epstein, a Woodbury Gardens board member.

Eichhorn said PSEG was working with LIPA to devise a program to reimburse customers for lost food and medicine.

“It’s something we know customers are aware of,” he said. “It’s been a request of government leaders. We will take the request very seriously.”

While the number of Long Island homeowners without power dwindled, North Shore residents continued to complain about a lack of Optimum service.

Mark Bunim of Great Neck said while he never lost power during Isaias, he's had no Optimum service for 11 days. Bunim, an arbitration judge, said he desperately tried to reach the cable provider, even twice visiting Optimum's offices. Bunim's service was finally restored Friday afternoon — two hours after Newsday inquired to Optimum about his outage.

"I understand this was a really bad storm. I understand that wires were blown all over the place," he said. "But the failure to address the problem; the failure to have representatives speak to the customers; not even willing to come by and look at the problem and give a timeline for addressing this? That's criminal. That's outrageous."