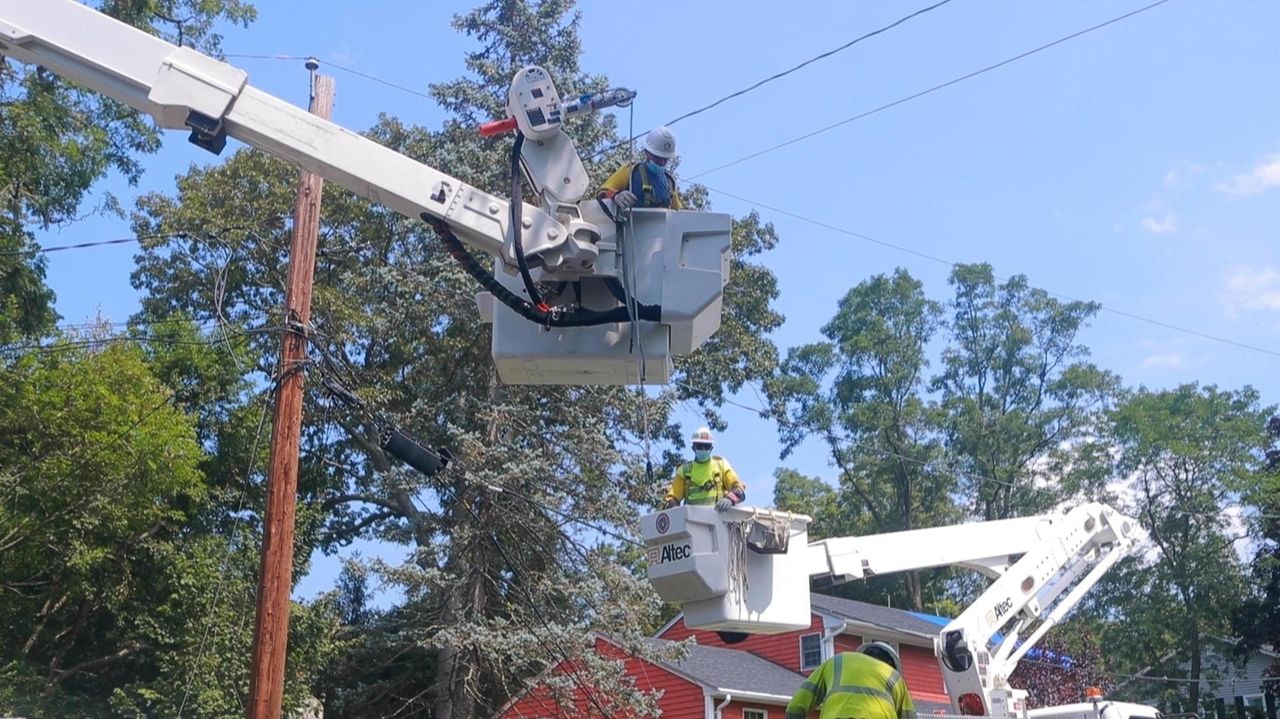 Thousands of Long Islanders suffered through a sweltering Sunday without electricity, five days after Tropical Storm Isaias caused widespread outages in the region as PSEG Long Island pledged to restore most customers’ power before Monday.

The prolonged outages have fueled outrage from those who still could not stock refrigerators or turn on air conditioners and prompted heavy criticism from state and local officials over how the utility has handled the repairs.

But thousands of high-voltage line workers and tree trimmers, some brought in from out of state, were working around the clock to make repairs, he said. He pledged most fixes would be complete by the end of Sunday.

"We recognize the inconvenience this creates for our customers," he said. "I can assure you we are doing everything possible to work as quickly and safely as possible to restore everyone's power."

A PSEG subcontractor was electrocuted Sunday afternoon while working on power lines in New Cassel, according to the Nassau County Police Department. The man, 34, was hospitalized in stable condition, according to a department news release. The electrocution happened about 6:35 p.m. near 683 Old Country Rd., police said.

The utility faced a new round of criticism from lawmakers on Sunday, with state Sen. James Gaughran (D-Northport) calling for the ouster of Eichhorn and Tom Falcone, president and chief executive of the Long Island Power Authority.

“I am disgusted by PSEG-LI and LIPA’s total failure that endangered our most vulnerable residents,” Gaughran said in a statement. Eichhorn and Falcone “must be terminated immediately.”

In a letter later Sunday signed by LIPA Board of Trustees Chairman Ralph Suozzi, the board said it shared the concerns of customers and will conduct an independent investigation.. "We respectfully decline your request to terminate our chief executive officer ... We will follow the facts and propose real solutions," the letter said.

Eichhorn said the utility did "a very good job" preparing for Isaias, but he acknowledged lapses in communications with customers after Tuesday's storm downed trees and power lines across Nassau and Suffolk counties.

"Our communications channels did not meet our customers’ expectations," he said. "We're going to look at that immediately. We're going to make fixes."

Eichhorn called Isaias “one of the worst storms Long Island has experienced.”

As temperatures Sunday reached the high 80s, and a heat wave was predicted for the workweek, Long Island residents still without power recited a long list of grievances with PSEG’s handling of the storm. Their complaints included outage information released by the utility that seemed to contradict the damage Long Islanders were observing around them.

In Syosset on Sunday morning, Aruneesh Salhotra said his power had been out since Tuesday, but an online PSEG outage map showed no outage at his address.

“For me the biggest question is accountability. Who’s accountable?” he asked. “Somebody should have been on top of it.”

Salhotra said he had sent PSEG around 23 messages and called the utility half a dozen times. But, he said, he could not get a straight answer about when power would be restored to his home.

Salhotra, a technologist at a bank, said he was “perplexed and disgusted” by the utility’s handling of the power failures.

Eichhorn attributed discrepancies to other power outages unrelated to the storm. On Friday, he said the larger number on the website included thousands of customers who lost power after the storm, plus an unspecified number of “duplicates.”

Bill Cundiff of Oceanside said Sunday that he had been without power since a neighbor’s tree fell on an overhead power line in his neighborhood Tuesday.

He said the PSEG app told him his outage was resolved about 1:30 a.m. Sunday. It was not.

“I checked the map and it said we were clear, and we weren’t clear,” he said.

He resubmitted his outage notification, and an automated PSEG text message Saturday said he could expect service restoration 2 a.m. Tuesday. He has not heard from the utility again.

A gas generator is providing enough power to run the refrigerator and wireless router for now — at the cost of $50 to $70 a day.

"Every place you look for information is different," she said. "Every single one is different."

For residents of Oak Beach, a power outage creates a second, more pressing problem: no water.

Residents of the small barrier island community need electricity to pump water from wells to their sinks and showers. Teresa Simone is one of many residents who's had to use bottled water for all her household needs since the storm knocked out her power on Tuesday.

"During COVID it's a huge issue," she said. "No one can wash their hands."

Repair crews have visited the community, she said, but as of Sunday afternoon, power still had not returned.

"We've been trying desperately to get PSEG to respond to this," she said. "You can’t just tell people you have to go without water for a week."

Lawmakers have voiced similar criticisms. On Sunday, Rep. Kathleen Rice (D-Garden City) and Nassau County Executive Laura Curran called on PSEG to refund customers for their last month’s power bills and for any spoiled perishables if they lost power for more than 24 hours.

“A prolonged power outage is difficult under normal circumstances, but in the midst of the coronavirus pandemic, it can be disastrous,” the two officials wrote in a letter to Eichhorn.

State Attorney General Letitia James has launched an inquiry into the utility’s preparation and storm response to “determine whether violations of state law have occurred,” according to a letter to PSEG top brass shown to Newsday.

“People can’t be without power for almost a week,” Schumer said at a Manhattan news conference.