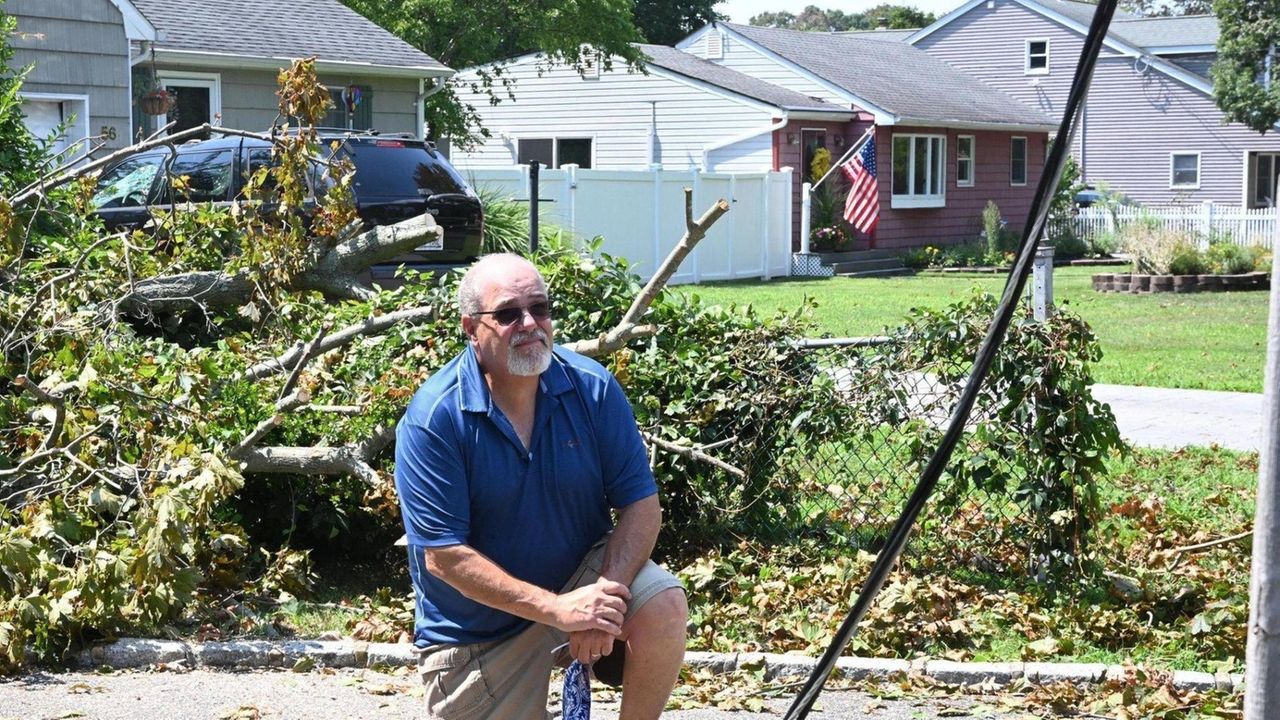 Outrage over prolonged power outages, almost a week after Tropical Storm Isaias battered the region, came to a boil Monday with 50,000 PSEG Long Island customers without electricity while near-90-degree heat left them sweltering and with little sense of when relief might arrive.

The restoration effort is now expected to bleed into Wednesday and potentially beyond, PSEG officials said, even as forecasters warn of high heat and humidity this week.

As politicians and residents alike condemned the response of the region's utilities to the storm's destruction, Gov. Andrew M. Cuomo threatened to revoke the state operating licenses of PSEG and New York City-based Con Edison, calling them out for their “lousy job” in Isaias' aftermath.

Lawrence Holzberg of Smithtown, who is on PSEG's medical priority list, was told his outage won’t be restored until Tuesday afternoon, when temperatures are again expected to reach the mid-80s. Holzberg, who has been without power since Tuesday, has Crohn’s disease and has lost medication because of his lukewarm refrigerator.

PSEG president Dan Eichhorn said that 50,000 customers remain without power Monday — including 13,000 from the original 420,000 knocked out during the storm, and another 37,000 who have lost power since Tuesday. PSEG's outage map shows more than 40,000 customers without power, roughly evenly split between Nassau and Suffolk.

The restoration work will continue through Wednesday with the "possibility" of that date being pushed back if the company finds more extensive damage than anticipated. PSEG said it has 6,000 line workers and tree trimmers in the field to restore power, up from 1,600 shortly after the storm hit. The vast majority are from out of town.

“In this storm it’s significant,” he said of the damage. “It’s really causing us to miss those estimated times of restoration for customers.”

Joe and Kathy Innace of East Islip were expecting a PSEG crew to arrive Monday morning to finally remove a live wire in their driveway.

But the couple — whose only power source has been a neighbor’s generator — was disappointed yet again when PSEG failed to appear. A tree-removal crew arrived hours later but there were no linemen to cut power to the downed wire.

“Still waiting,” said Joe Innace, 64, a retired business journalist, who said the utility has promised to have the wire removed every day since Thursday.

Meanwhile, a live wire lay at the end of his and a neighbor's driveway, Innace said.

“I thought they might have given a live wire a little higher priority," he said.

Cuomo announced Monday that the State Department of Financial Services will allow temporary, expedited permits to be issued to out-of-state independent insurance adjusters. The move, he said, would increase the number of available adjusters to process storm-related claims.

Nassau County Executive Laura Curran and six local state senators on Monday called on PSEG to reimburse residents for perishable food and medication lost in nearly a week without power.

“We are calling on PSEG Long Island to help — right now," said Curran, who also wants PSEG to refund one month’s utility bill for residents and businesses who experienced outages lasting more than a day.

Eichhorn said PSEG is talking with LIPA about the prospect of compensating customers for lost medicine and food although no decision has been reached. Only 15% of the 2,400 customers who file claims with PSEG annually ever get compensation, Newsday has reported.

Con Edison is offering up to $500 to customers for spoiled food and medication.

Meanwhile, three out-of-state contractors working to restore service have been injured on the job, according to the union representing more than 1,500 PSEG unionized employees.

Patrick Guidice, business manager for Local 1049 of the International Brotherhood of Electrical Workers confirmed three separate “storm-related accidents involving electricity” in Centereach, Locust Valley and in Westbury Sunday night. None of the injuries is life-threatening, he said.

Guidice said the injuries point to the danger that workers face in working on downed power lines and adjacent trees.

“I understand customers’ frustration,” he said. “But putting more and more pressure on my people out in the field is going to get someone killed."

“The safety and welfare of our workers is PSEG Long Island’s number-one priority,” she said, offering no further details.

The union also charged that workers who trimmed trees back were let go before the storm.

PSEG would only say that it did not lay off the vegetation management contractors—a suggestion that the layoffs were left to the contractors themselves.

“For the past two years, we have been working to complete the transmission trim and 60% of the distribution trim, by end of June 2020, to improve system reliability,” the company said. “From what we are told, the majority of the contractors were reassigned.”

Peter Forman, deputy mayor and chief police commissioner of Sands Point Village, said he is so frustrated with PSEG’s inability to retain proper records of homes without power that he has created an email address for residents to report outages — so the village can keep resending them to PSEG.

“There is a clear disconnect between the outages that they are showing on the public-facing website and what they are telling us they are aware of," said Forman, the commissioner of the Port Washington-Manhasset Office of Emergency Management. "I am concerned and skeptical that the reality is they keep losing the outage reports.”

After nearly a week of filling up his generator twice a day, and watching neighbors all around him get their power restored, Anthony Leteri of Fort Salonga is fed up.

“My wife and I have had just about enough at this point,” Leteri, 70, said from a new cellphone he bought because his home phone service is out, too. He was told his power would be back Sunday, but that milestone came and went. So it was back to the local gas station to fill a 20-gallon tank.

“At some point, you just lose your patience,” he said. “I just don’t know what to do.”

Sefi Fabricators, a manufacturer of stainless steel products in Amityville, said it is out $7,000 a day since Tuesday because of sales lost following the power outage.

“We’re still not working because we have no power,” said Meno, who recently began bringing back her 300 employees after the coronavirus pandemic shutdown.

The next morning, she compiled a laundry list of problems for officials reviewing “the bungling of this response," including failing to provide accurate information on outage maps; a failure to process her outage, even after four separate attempts, and the poor optics of having up to 10 trucks sitting idle in her neighborhood, around the corner from dozens of homes without power.

Michael Neary, 51, of Massapequa grew so frustrated with incorrect estimates and claims of his power already restored that he went to PSEG’s customer service center in Seaford Monday to clear things up. He wasn’t happy with the result.

A sign on the window said the facility is closed and “cannot provide any information regarding loss of power or issues with trees.”

“This is ridiculous,” said Neary, who received word from the utility that his power had been restored when they were still in the dark. “It’s a mess.”

For some PSEG customers, the lesson is to begin planning for self-sufficiency.

Kevin Suran of Plainview, who had his power restored Monday, said he's considering switching to a natural gas-powered backup generator that powers his entire home and kicks in the instant the power goes out.

After a week without power, “It’s almost mandatory,” he said.

With Candice Ferrette and Carl MacGowan

Curran, lawmakers call on PSEG to reimburse for foodThe Nassau County executive and six Long Island state senators want the utility company to reimburse residents for perishable food and medication lost from going nearly a week without power. Number of outages has been hard to pin downPSEG's outage map and press releases have given different numbers throughout the cleanup. The reasons are complicated.

Officials: Girl, 4, dies of injuries in Southampton crash
1:18
LI weather: Storm heads upstate after mostly sparing Long Island
Ex-truck maker tries again to build mini-storage facility in Ft. Salonga
King spoke against racism in 1965 visit to Long Island
Wading River, a 'storybook suburbia,' draws homebuyers seeking room to grow
1:51
How race is taught in LI schools — and why some educators feel under siege
Didn’t find what you were looking for?