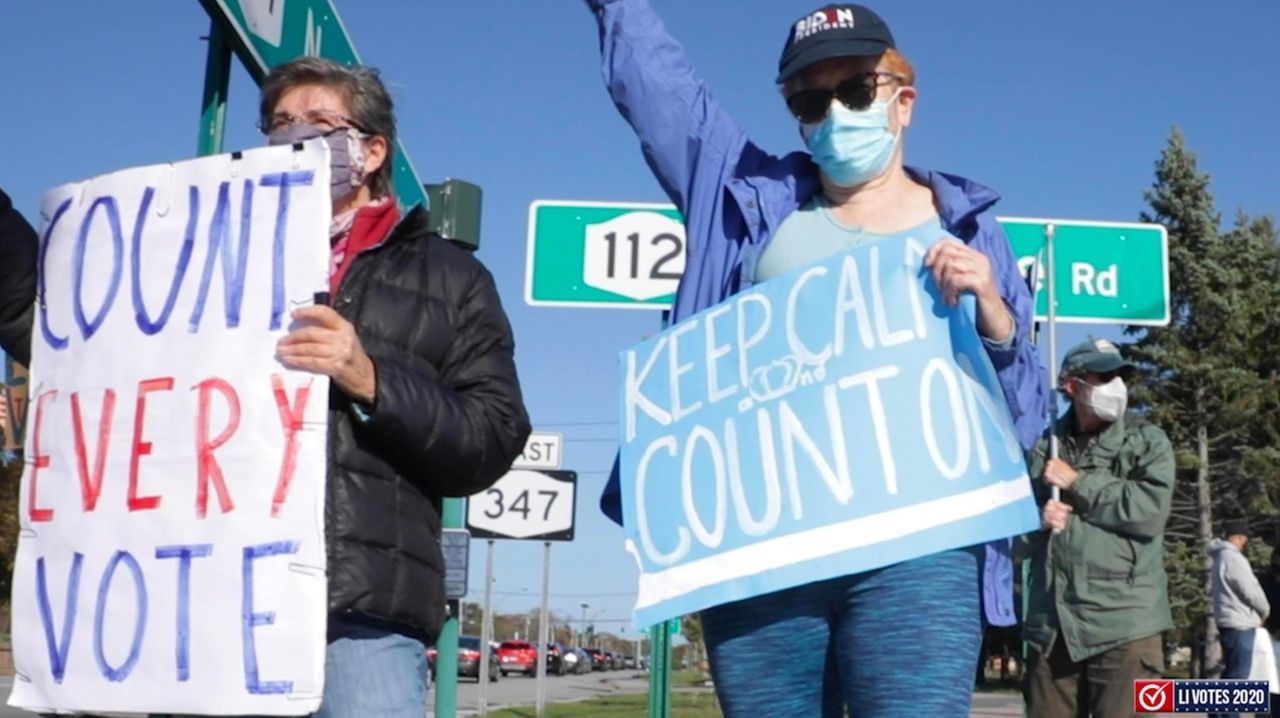 Long Islanders rallied at a Port Jefferson intersection Wednesday afternoon calling for all votes to be counted and in support of Joe Biden. Over in Bellmore, people gathered at a rally to support the president. Credit: Newsday / Chris Ware, Reece Williams

The day after an election in which vote-counting was still underway, Long Islanders rallied, Zoomed and otherwise rode the wild swings of results from a still-undecided historic presidential contest.

Ballot counting continued in battleground states and beyond, and there were gatherings, virtual and in person, on the Island and across the country as supporters of President Donald Trump and former Vice President Joe Biden expressed worry over the integrity of the election and the need to keep counting votes.

At the Bellmore train station, more than 100 supporters of the president wore Trump T-shirts and waved flags bearing his name, at a rally organized by the group Long Island Loud Majority.

At least two dozen vehicles, many of which were pickups adorned with pro-Trump messages, parked adjacent to Sunrise Highway. There were supportive honks from passing motorists and truck drivers.

Farash said Trump was going to go through a "very long legal fight" and he echoed the president's accusations..

In Port Jefferson, a Biblical Moses — actually a Biden supporter — stood at a Port Jefferson intersection Wednesday and held a Styrofoam tablet: "THOU SHALT NOT STEAL THE VOTE."

Jim Navarre, 69, of East Setauket, was among a dozen or so Biden demonstrators gathering Wednesday and calling for the continued counting of ballots between Trump and Biden. 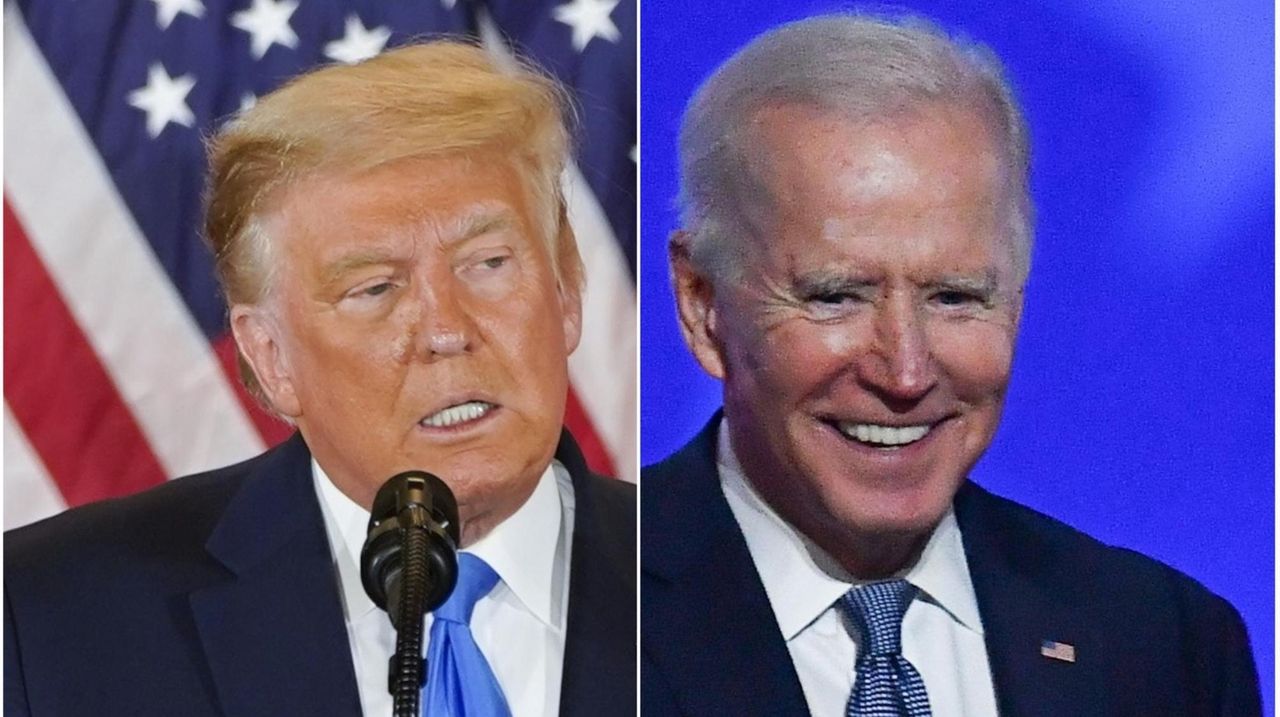 "I’m out here to see the White House returned to a decent person, a decent occupant," Navarre said.

"Protect the Results will NOT ACTIVATE the national network right now. The election results aren't final and we are monitoring key states as they continue reporting. We have reason to be optimistic for a Biden Victory," an email from the group said, instead hosting an event on Zoom.

In Manhattan, meanwhile, hundreds took to the street demanding "Count Every Vote." 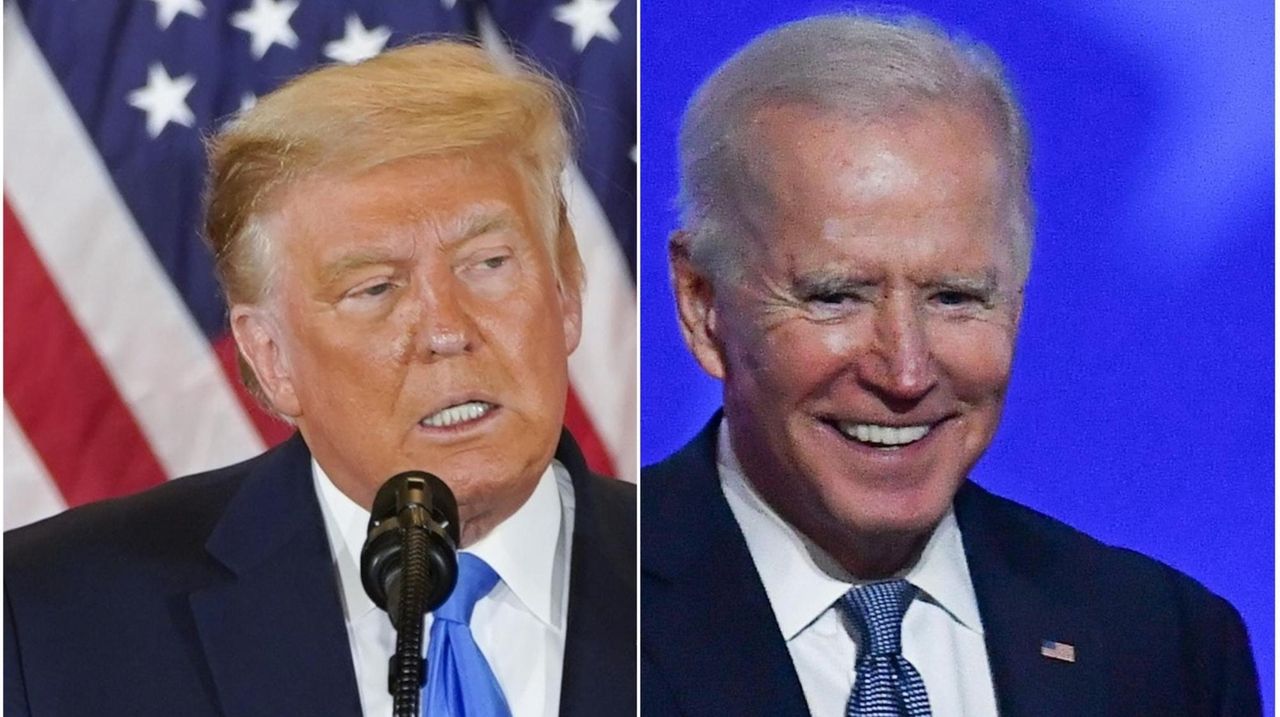 No winner yet as Trump, Biden locked in tight race Faith Jessie and Newsday’s political team break down the latest news in the presidential and local races. Credit: Newsday

Earlier in the day, New York City Mayor Bill de Blasio said the city was "concerned and ready" about the prospect of violence, although there hasn’t been any.

"if you're talking about the facts on the ground," he said, "so far, we have to be satisfied that this country has sent a message that it wants a peaceful outcome."

Meanwhile, at the Port Jefferson pro-Biden rally, "Honk for Counting Every Vote," read the sign held by Rosemary Dantone, 66, who lives nearby. A man in the group held an American flag.

Some drivers passing through the intersection — Nesconset Highway and Route 112 — honked in support. Others shouted "Trump 2020" or "four more years," and an expletive-laden invective about "crooks."