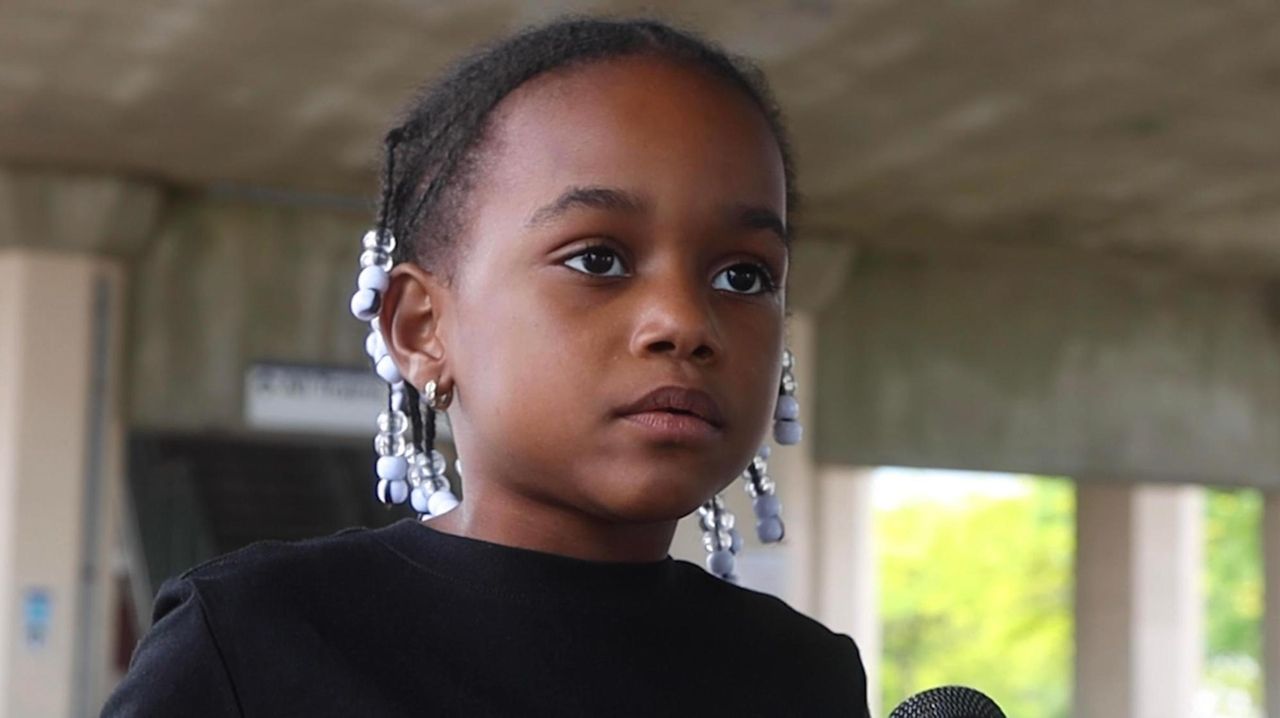 Wynta-Amor Rogers told her mom, Lakyia, that she wanted to go march in the protest in Merrick on Wednesday so she could have her voice heard. Credit: Newsday / Cecilia Dowd; Howard Schanpp

Amid the legion of demonstrators marching through Merrick streets Wednesday, it was 7-year-old Wynta-Amor Rogers’ fierce expressions on her cherubic face that won hearts and imaginations the world over when she was captured on camera chanting “No justice, no peace.”

A 15-second video tweeted Wednesday evening by LI Herald Executive Editor Scott Brinton is all it took for the pint-size activist from Uniondale to catapult to internet fame. Brinton’s tweet featuring the first-grader garnered more than 15.6 million views as of late Thursday afternoon.

She deftly explained, with wisdom beyond her years, why she took to the streets and joined protesters nationwide who are fighting police brutality after the death of George Floyd. Floyd died last week after a Minneapolis police officer was video recorded kneeling on his neck for almost nine minutes.

“I just want everybody to get along. I want us to be a good New York community,” Wynta-Amor said, while raising up her arms and then bringing them together in front of her. “If we get through with this, we can fight this, you know? And we can come into a big group in one piece — just one piece.”

Unlike some of the corrosive, partisan politics plaguing Washington, D.C., and the country, Wynta-Amor added, the goal is racial unity. “I was marching because I want black people and white people to be together,” she said. “For my message for people, I just want God to be strong. We can get through this.”

Wynta-Amor’s mom, Lakyia Jackson, said Thursday that rain almost kept her and her daughter from the protest in Merrick. But Wynta-Amor wasn’t having any of it, Jackson said.

Jackson said her daughter, who attends the Roosevelt Children’s Academy, understands equality. But she may be too young to grasp some other dynamics of the current racial strife in the country, such as violence and looting.

“I just have to explain to her, everyone is not peaceful,” Jackson said. “She understands the reason why we dropped on our knee was because the police, you know, killed George Floyd. … She understands that there are good cops and there are bad cops.”

When Jackson went to bed Wednesday night, her daughter’s video generated several thousand views. But Thursday morning, when she woke up, Jackson learned her little girl was a newly minted celebrity.

“I was like, ‘Wow, look what my daughter has done.’ She has been heard.”

Jackson said she is not listening to any critics who argue her daughter is too young to be protesting.

“To the negative comments, God bless ya’ll. … I just hope that they can come to peace,” Jackson said.

Much like her mother, Wynta-Amor is elated by her recent fame. In fact, she reverts to speaking like someone her age, instead of a seasoned, political activist, while explaining her glee.

Thousands rally with George Floyd's brother at memorial in BrooklynFloyd's brother, Terrence Floyd, wearing a T-shirt and coronavirus face mask with an image of his brother, was met by cries of "you are not alone" as he took to the microphone in an emotional display.  Floyd eulogized in MinneapolisFrom coast to coast, and from Paris and London to Sydney and Rio de Janeiro, the chilling cellphone video of Floyd's slow death has set off turbulent and sometimes violent demonstrations against police brutality, racism and inequality. See photos of protests on LI over George Floyd's death in MinneapolisProtests in communities across Long Island, including Plainview and Riverhead, have occurred following the death of George Floyd by a Minneapolis police officer. See photos of NYC protests over George Floyd's death May 30 -June 2, 2020New York City, like many other cities around the nation, has seen protesters take to the streets to protest the death of George Floyd by a Minneapolis police officer in May as scene in images from Newsday photographers May 30 to June 2, 2020