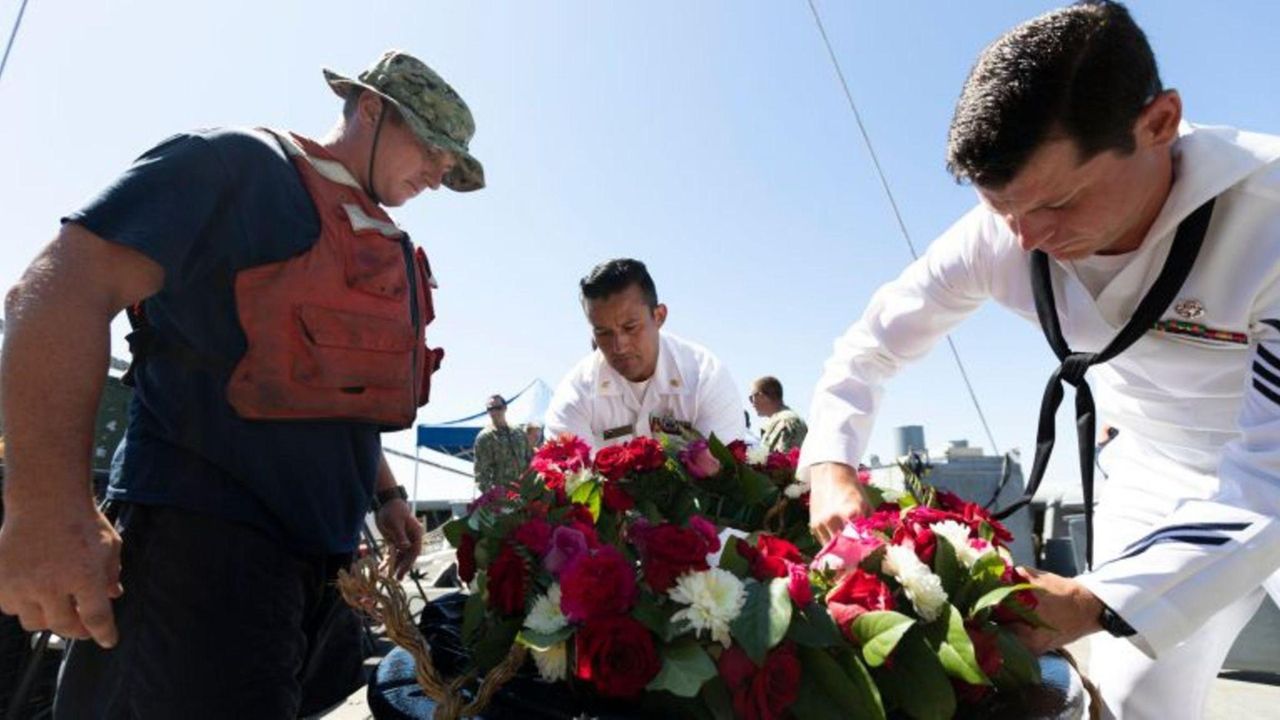 Standing on a ship moored off Fire Island on Thursday, a naval officer read the names of six sailors who died 100 years ago when the USS San Diego sank to the bottom of the Atlantic Ocean about 10 miles offshore after it was believed to be struck by a mine laid by a German submarine. As taps played, a large wreath of roses and other flowers was brought to the edge of ship and handed to Navy divers, who placed it on the wreckage, which sits about 100 feet underwater. Credit: Michael Owens

Standing on a ship anchored off Fire Island on Thursday, a naval officer read the names of six sailors who died 100 years ago when the USS San Diego sank to the bottom of the Atlantic Ocean, believed  to have struck a mine laid by a German submarine.

Command Master Chief Joshua Jackson of the fourth ship named USS San Diego (LPD-22), who flew from California to New York for the occasion, read the names during a ceremony to remember and honor them for their service in defense of freedom during World War I.

“Today, our Navy considered San Diego site a war grave, a war grave that is as sacred as any of the graves at Arlington National Cemetery or any other national cemetery,” Jackson said aboard the salvage ship USNS Grasp. “Our diligence  in protecting this site, its legacy and heritage is a debt we owe to the sailors entombed here and their families.”

As "Taps" was played, Jackson and Sam Cox, a retired rear admiral who is the director of Naval History and Heritage Command, carried a large wreath of roses and other flowers to the edge of ship. Navy divers placed  the garland on the wreckage, which sank in 110 feet of water.

The cruiser San Diego, which had a 1,180-member crew on board, was the only major American warship lost in World War I.

The German submarine U-156 showed up less than 10 miles off the shores of Fire Island earlier that month, said Cox.

“The first thing she did was to lay a string of mines right here, because this was the main convoy route. Most of the convoy routes were coming out of New York City, heading for Europe,” he said during the ceremony. “We believe those mines were what the San Diego hit.”

The San Diego was heading to New York City to escort a convoy of ships headed to Europe when it was struck  by a mine, leaving two of its major passageways flooded, Cox said.

The low number of casualties, he said, was due in part to good weather and the distance from shore, which enabled sailors to row to land.

“The casualties could have been a whole lot higher,” Cox said.

Between late 1917 and the end of the war, he said, the Navy  took more than 2 million American soldiers to Europe without losing any of them to U-boats.

“It was the United States Navy’s ability to get all the Army troops over to Europe without having any of them lost – that was a critical factor in bringing about the end of the war,” Cox said.

The crew of the USNS Grasp and a team of divers, archaeologists and analysts arrived on Sunday to continue its survey of the wreck to make a definitive determination whether the ship was sunk by a German submarine-launched torpedo or an enemy mine.

The team visited the wreck last year and collected data, but poor visibility prevented archaeologists from reaching a definitive conclusion.

On Thursday, all stopped work temporarily to join in the commemoration of the 100th anniversary.