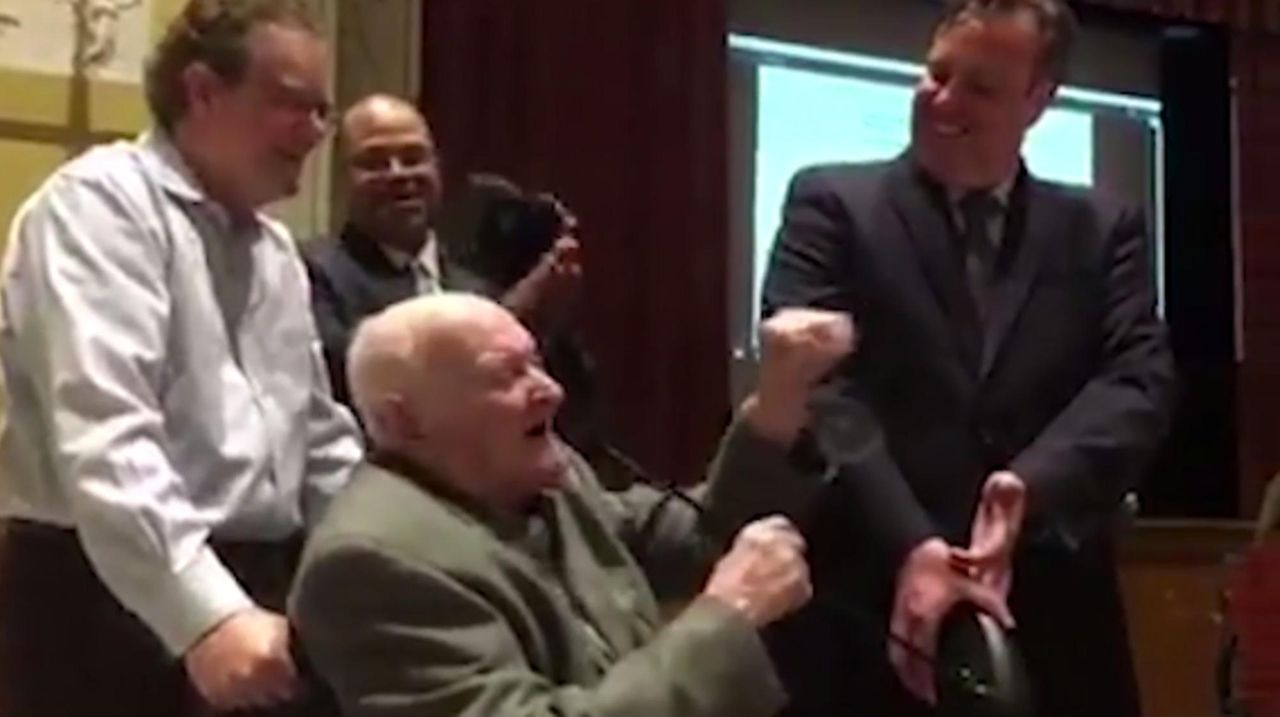 William Houston, 92, was honored at a June 13 Valley Stream Central High School board meeting with a trophy for winning the Long Island Championship for high jump in 1943. He didn't receive a trophy at the time because of metal rationing during World War II.  Credit: Facebook / Elizabeth Wirth

After more than 70 years of waiting, a Long Island high jump champion has finally received his trophy.

In 1943, before high jumpers had thought to launch themselves backward over the pole, William Houston leapt six feet in the air, feet first, to win the high jump for Valley Stream Central High School.

Houston remembers that his father, who was not the sentimental type, wrapped him in a big hug. It was one of the best moments of his young life, Houston said. But instead of receiving a trophy, he was given a certificate because of metal rationing during World War II.

“I was disappointed. It really meant a lot to me,” said Houston, 92, of Amityville.

Last May, during dinner, Houston’s granddaughter overheard him talking about the high jump championship. It was a story the family had heard several times before, but in this retelling, Houston — a retired letter carrier — mentioned how he wished he would have received a trophy.

“We knew that he had a lot of pride in that, but had never heard him talk about the metal rationing before,” Houston’s daughter, Laura Neville, said. Neville contacted Bill Heidenreich, the superintendent of the Valley Stream Central High School District, to ask him if he would consider honoring her father. After a discussion with the school board and principal of the high school, a large trophy was made to be presented to Houston during a school board meeting, June 13.

Neville, 65, of Amityville, was excited but unsure if her father would agree to go to the high school for the meeting.

He had suffered a stroke and is confined to a wheelchair, but “at 92 still thinks he should be that athlete,” Neville said. But when Neville told her father about the presentation, he “pumped his fist and smiled that little Irish smile.” She hired an ambulette to take him to the high school’s auditorium.

Houston said he didn’t plan to speak at the meeting, but when he saw the gold trophy with the red, white and blue pillars, he hoisted it into the air, rolled himself to the podium and was offered a microphone.

“My wishes all came true and this is the best thing that I have ever received, because at 92 I don’t think I’m gonna win many more,” Houston said, chuckling.

He ended his speech by chanting: “Go Central Go!” and received a standing ovation from a crowd of about 100 people.

“It meant so much to me that my daughter and granddaughters and everyone else connected came together to do this for me,” Houston said. “It felt like I won the Olympics.”