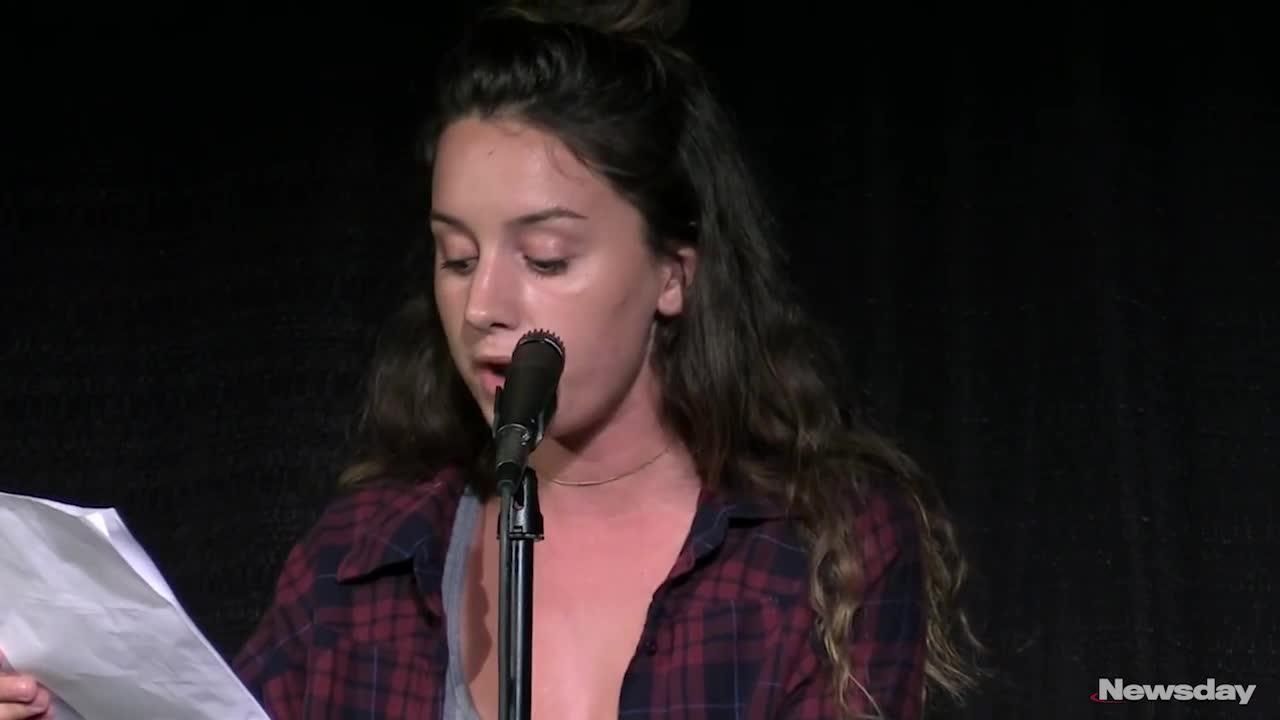 A poem about the women of Long Island is quickly making its way around the internet.

After moving to Valley Stream, Olivia Gatwood, wrote “Ode to the Women on Long Island,” a poem about the Island’s fearless wives and mothers who smoke in their cars before yoga, harbor “strong opinions about hanging Christmas lights after New Year’s” and don’t hesitate to threaten use of a meat slicer if their sons were to commit violence against women.

The video was posted to YouTube in February and was reposted to Facebook July 14. It went viral after the recording was shared by ‘Star Trek’ star George Takei and has since been viewed more than 6 million times on Facebook.

Some Long Islanders have praised the work, and many were struck by Gatwood’s delivery.

“I was raised by women from Long Island and I’m a having a lot of tears right now,” one YouTube user commented on the video.

“That was impeccable. That ... delivery had me snapping throughout,” another user wrote.

Gatwood recites the poem in a brusque, “unapologetic” Long Island accent, but the poet isn’t from here or even from the Northeast. Gatwood, who tours nationally performing her poetry, is from New Mexico originally and moved to Valley Stream only two years ago.

Newsday spoke with Gatwood in March about what inspired her to write the poem, Long Island’s unique brand of feminism and how she nailed the accent. The interview has been edited and condensed.

Q: What inspired you to write this poem?

When I first moved I didn’t really have a community of friends on Long Island, so I ended up spending a lot of time with the woman who I live with and her friends. She’s a yoga instructor, so I would go to these yoga classes with her once a week and was exposed to this whole group of women twice my age.

I was in awe of them. I spend a lot of time in artist and activist circles where pretty much everyone is a self-proclaimed feminist, but these women weren’t that. They sort of instinctively practice these things — they’re independent and angry and supportive of each other and naturally subscribe to these ideas that I had spent a lot of my life having to learn.

It was really inspiring for me to see.

Q: What was the writing process for this piece like?

What was cool about this poem was that I had been sort of writing it in my head inadvertently over the past few weeks. So when I actually sat down to write it, I did it in like 15 minutes.

Before writing the poem, I had been taking notes on my phone. I’d write down little quotes, but not because I thought I was going to end up writing something, but just because I thought they were funny. The line about the knife — that came from a woman who I had been talking to. I told her I carried a knife in my bag and showed it to her. And she said, “That’s not big enough.” And I just thought it was so hilarious.

That’s kind of the beauty of being an outsider, because if I were from Long Island, I don’t know if I would have noticed these things.

Q: Why did you decide to perform the piece in an accent?

I knew that so much of what I loved about these women is their voices. I think women in general are really conditioned to be quiet and not to take up space and to apologize for having opinions, and I noticed that these women didn’t do that. It wasn’t like they were unlearning these things, it was like they had never learned that this is how you’re supposed to be as a woman. And I think that really comes across in their way of speaking ... They’re very loud and fierce, and I knew that the only way I could communicate that and how beautiful it is was through doing it in that voice.

Q: How did you develop that accent?

I’m really good at accents in general. But I would do these voices with my business partner at the time, Megan [who lived in Valley Stream]. We came up with these alternate personas called Rhona and Rhonda, these two Long Island wives, and we’d talk like them. We kind of did it to make fun of her mom in a playful way, and so I developed it over time that way.

Q: Have you seen a response from Long Islanders?

It’s exciting when people say those things to me or ask if I’m from Long Island.