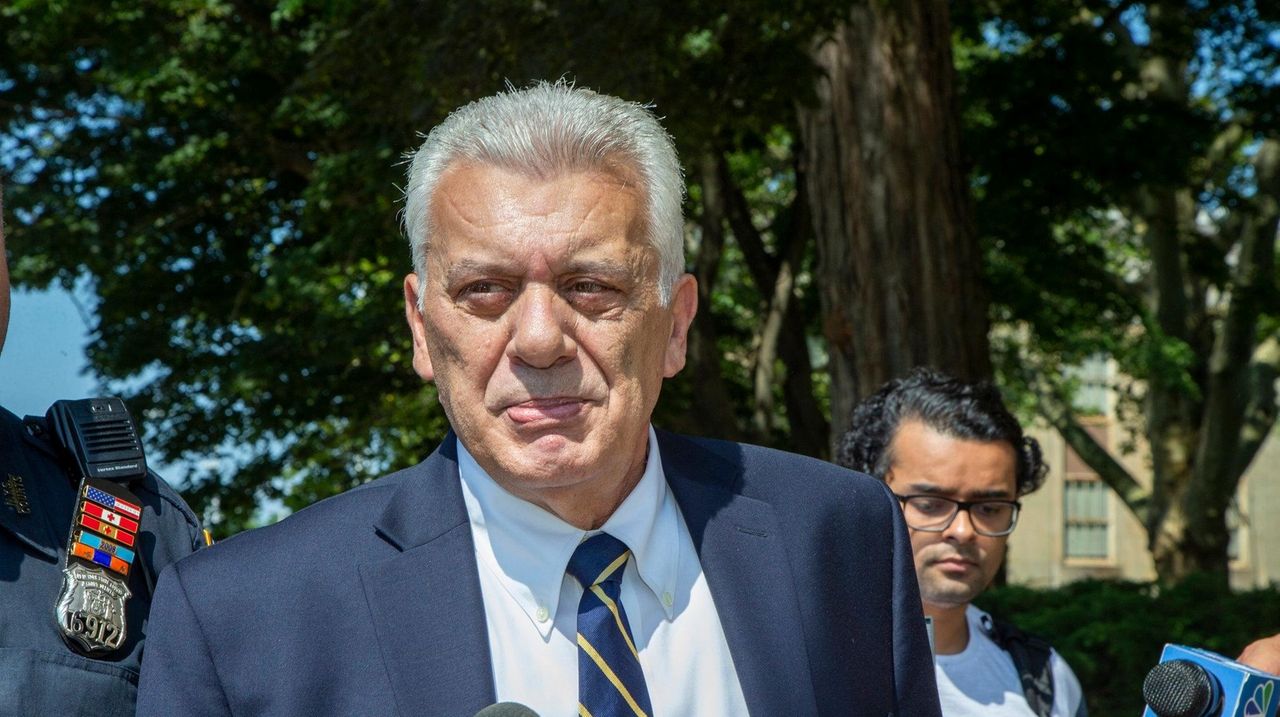 Former Town of Oyster Bay Supervisor John Venditto left court as a felon Friday, his decades of service as part of the engine that drove Nassau County’s Republican machine tarnished by his guilty plea to corruption charges.

Venditto, 70, of Massapequa, admitted to a felony charge of corrupt use of position or authority and a misdemeanor charge of official misconduct in a deal that stripped him of his law license but didn’t include any jail time, probation or community service.

The former GOP power broker’s admissions came two years after indictments also ensnared a handful of others with Oyster Bay ties — after Nassau District Attorney Madeline Singas took aim at what she said Friday had been “pervasive corruption” in the town’s government.

Venditto strode confidently into Nassau County Court with his wife by his side, before soon raising a hand and swearing to tell the truth.

But he seemed to betray nervousness as he started to answer questions from state Supreme Court Justice Charles Wood.

Venditto was unsure if he should stand or sit as he prepared to admit wrongdoing just 14 months after a federal jury acquitted him of 27 corruption charges in a separate case.

“You’re doing this of your own free will?” Wood asked him of the guilty pleas.

“Yes I am, sir,” Venditto answered.

After his pleas, the judge sentenced Venditto to a three-year conditional discharge.

The sentence, which the prosecution and defense agreed to in plea negotiations, means Venditto will face no further punishment if he stays out of legal trouble for three years. He had been facing up to four years in prison if convicted of the top count in each of the two indictments.

The former public servant surrendered a mandatory DNA sample to court officials and paid a fee before exiting the courthouse without his relatives or his lawyers, Marc Agnifilo and Joshua Kirshner.

Venditto declined to comment specifically on his plea as a throng of media members surrounded him, speaking only about returning to his life of retirement and to pay compliments to his attorneys.

“This is a very serious day. And you heard the sentence. You have it all," Venditto told Newsday. "And I don’t really want to do anything beyond what was done in court.”

But the district attorney heralded his conviction as a victory for taxpayers.

“He is now a convicted felon. Look at that fall from grace,” Singas said, calling Venditto’s plea “a significant admission of corrupt actions at the highest level of town government.”

She added: "This plea sends a strong message that we will prosecute and we will investigate and we will hold those accountable at the highest levels when they abuse the public trust.”

Agnifilo told reporters that Venditto recognized he had done something wrong.

“He leaves his public service now as a felon. That’s hard on him. Hard on his family,” the Manhattan attorney said. “We had long discussions about whether it was worth it or not. And the conclusion that we came to is, while we certainly could have gone to trial on the two indictments, and I think we had a decent chance of winning, we also had a decent chance of losing.”

Venditto served two decades as Oyster Bay’s top elected official before resigning in January 2017 as the federal corruption case was pending against him that ended in May 2018 with his acquittal.

Venditto pleaded not guilty at his June 2017 arraignment in Nassau County Court to 10 state charges — three felonies and seven misdemeanors.

Those charges followed a 14-month probe by Singas’ Public Corruption Bureau that included extensive use of wiretaps and exposed what she said was “a shocking and interconnected web of public corruption” in Oyster Bay.

Singas insisted Friday that Venditto’s guilty plea wasn’t a conviction in name only.

"There’s absolutely punishment," she said. "He was the former supervisor and he walks away with his head hung low as a convicted felon. He’s lost his law license."

The district attorney also said a judge could have sentenced Venditto to no jail time even after a felony conviction at trial, and that the ex-politician “has to go down in history now as the corrupt official in the Town of Oyster Bay.”

Both criminal admissions Venditto made in court related to Ippolito, who also was indicted in June 2017 despite his death earlier that month in federal prison at age 78.

Ippolito was serving a 27-month sentence for tax evasion after a 2016 guilty plea.

The Nassau district attorney’s office said later that the grand jury had voted on some of the charges before Ippolito’s death.

Wood, who usually sits on the bench in Westchester, ended the state case against Ippolito in September 2017.

Nassau prosecutors had alleged Ippolito collected $1.6 million in bribes from Carlo Lizza & Sons Paving Inc. company owners Elia "Aly" Lizza and Marisa Lizza for negotiating anticipated millions in payments to their company from a housing project developer, while Ippolito — in his town job — also controlled oversight of the rezoning application that would permit the construction.

The project was a $150 million senior citizen housing complex known as Cantiague Commons — which was never built.

Venditto admitted Friday he advocated and voted for the approval of the rezoning application to permit the construction, while aware that Ippolito, as a town commissioner, also had a financial interest in the deal.

"Notwithstanding Mr. Ippolito's financial interest, I allowed him to supervise the Cantiague Commons rezoning application on the town's behalf, which created a conflict of interest," Venditto said during his official misconduct plea.

Venditto admitted in connection with his felony plea that while the town was in a fiscal crisis, he authorized the hiring of a part-time Parks Department employee at Ippolito's request to benefit Ippolito in his relationship with the employee's mother.

Singas credited the work of her public corruption team Friday when asked about Venditto's state conviction after his federal acquittal.

"They were dogged in their investigation," the district attorney said.

In the federal case, Venditto had stood trial with former Nassau County Executive Edward Mangano and his wife, Linda. The couple's case ended in a mistrial before a retrial this year that ended in convictions.

Agnifilo acknowledged Friday that Venditto had “trial muscles” or confidence after his federal acquittal and “a lot of uncertainty” surrounded his decision to plead guilty in the state case.

The attorney said the defense team and Venditto talked at length about whether he was “relinquishing the legacy” of his public service, but Agnifilo said he told the ex-politician that he'll be judged “on his whole record.”

He added: “There’s no allegation he put a dollar in his pocket. … And if the worst that can be said of Mr. Venditto ... is that he didn’t keep Fred Ippolito on a short enough leash, I guess he’ll have to live with that and I think he can.”

He's awaiting sentencing after a hearing into potential juror misconduct at his trial.

Corruption on LI: 10 cases to knowOver the past few years, prosecutors have charged Long Island politicians and public officials with crimes ranging from tax evasion to bribery. Some of these cases resulted in convictions, while others are ongoing. Follow Newsday's latest coverage on the most prominent cases here. Venditto and the politics of LI corruption Venditto not guilty; jury deliberating on ManganosJurors acquitted former Oyster Bay Town Supervisor John Venditto on all corruption-related charges, delivering a partial verdict in the trial that also includes former Nassau County Executive Edward Mangano and his wife, Linda.