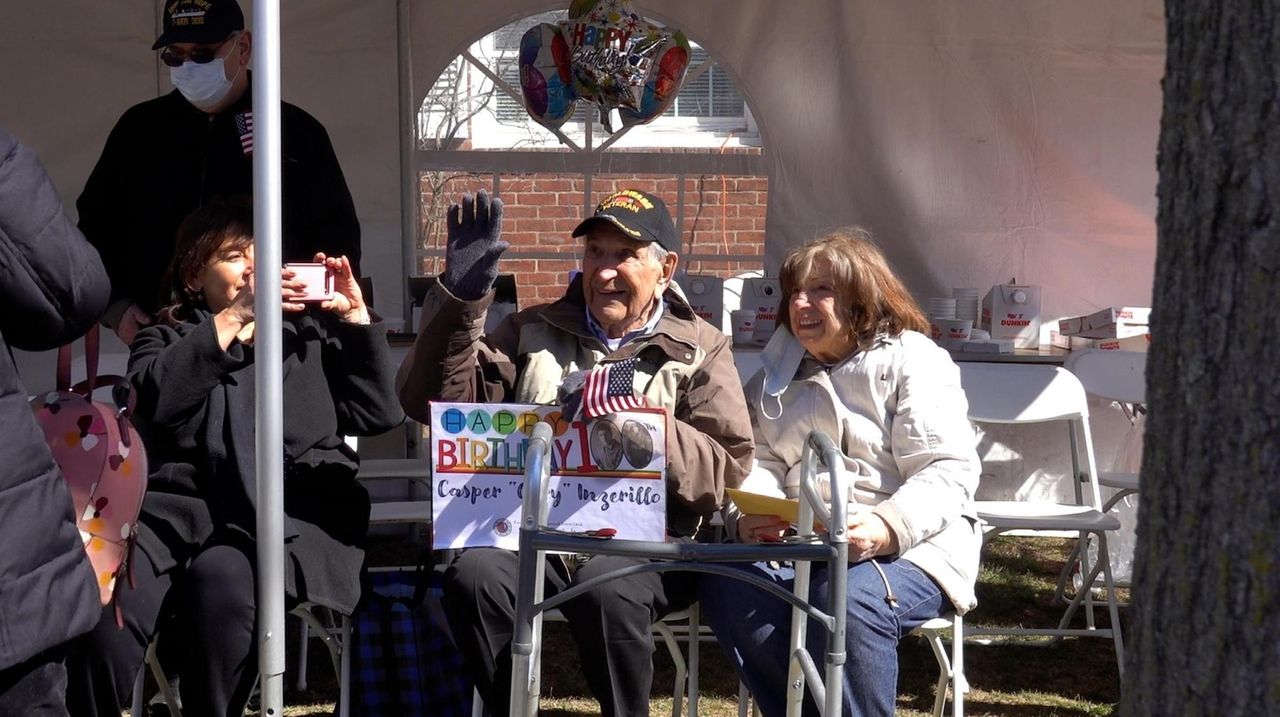 More than 100 friends, neighbors and relatives gathered on a normally quiet street Sunday to honor World War II veteran Gary Inzerillo on his 100th birthday, a celebration that included police cars, fire trucks, classic cars, dozens of motorcycles, a helicopter and enough military vehicles to liberate most of Nassau County.

Inzerillo, a retired NYPD officer, joked and posed for photos with well-wishers in a three-sided tent erected outside his home on Paul Avenue in New Hyde Park as the car parade rumbled by, basking in the buttery sunshine and the attention.

"I feel good," said Inzerillo, who has suffered some hearing loss but is otherwise sharp and spry. "I’m still alive and I feel pretty good to be alive."

Inzerillo, whose actual birthday is Monday, was joined by 16 other World War II veterans and seven WWII wives at the celebration as well as his own wife of 69 years, Ann.

"She used to be my girlfriend," Inzerillo wisecracked.

Inzerillo’s service to his country, however, is no joke: The former Army corporal saw heavy action in the South Pacific and was awarded the Bronze Star and other medals.

Inzerillo doesn’t talk much about his experiences in the Pacific, his daughter Debbie O’Keefe said as Inzerillo played with her granddaughter, nearly 2-year-old Thea. He would rather focus on his family — three daughters, six grandchildren and seven great-grandchildren, with an eighth on the way, she said.

"He is such a great guy and he is loving all the attention," she said. "He deserves it all. He loves being a grandfather and great-grandfather."

Inzerillo’s birthday party was organized by Honor Flight Long Island, an organization that provides veterans with free flights to Washington to visit the World War II and Korean War memorials, according to vice president Roger Kilfoil. But a wide-range of community groups pitched in, including Nassau County police, the New Hyde Park Fire Department, the Girl Scouts, and Rolling Thunder and other veterans’ motorcycle clubs. The big drums of the Naval Sea Cadets of Nassau marching band provided a patriotic soundtrack.

World War II re-creators Connor Amato of Centereach and his dad Richard Amato of Deer Park, driving in a vintage Jeep, led a convoy of military vehicles that looked like it had come direct from Omaha Beach.

"It is eye-opening to see these men and think about what they have gone through," Connor Amato said.

Nassau Police Commissioner Patrick Ryder gave the Inzerillo a copy of his shield after a police helicopter flew by. Ryder called Inzerillo a "true hero."

"We spend all this time as kids growing up in today’s world and we think that heroes run up and down football fields, or play centerfield for the Yankees," Ryder said. "Heroes ran up and down the battlefield. That is a hero."