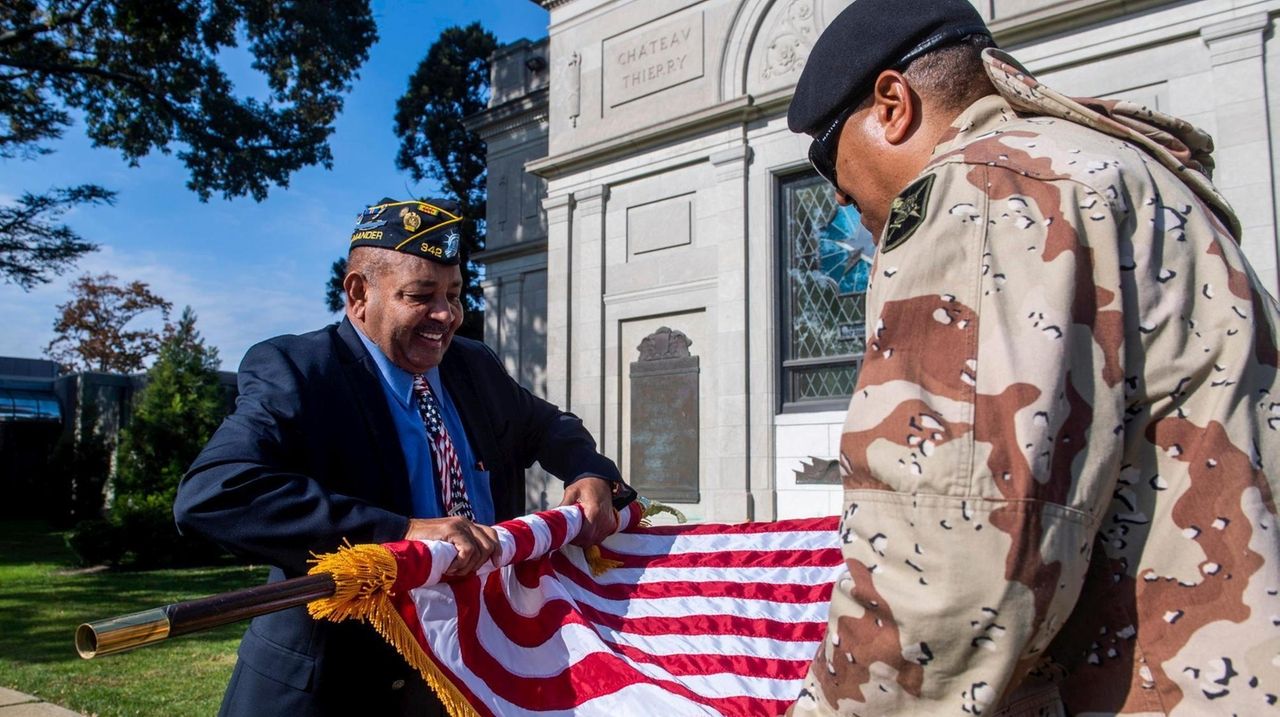 This story was reported by Matthew Chayes, Dandan Zou and Nicholas Spangler. It was written by Chayes.

Army veteran Donald Simmons of Carle Place earned his Purple Heart on a Vietnam battlefield in 1968 — a 20-year-old soldier with a bullet wound to an arm, and a stomach hit by shrapnel.

The wounds eventually healed but his emotional scars from the war — often a slog through hot, dense jungles against an unseen enemy — persist decades after he returned home.

"I have nightmares all the time. I don’t sleep at night. I drank a lot when I got out. I was just trying to forget about it," Simmons, 73, recalled Thursday as he prepared to rumble up Manhattan’s Fifth Avenue on his new Harley for the city's Veterans Day parade. "You see so much horrible stuff. And you’re only a kid when you go to war. Kids fight the wars of this country."

Simmons was among nearly 30 men — ranging in age from 65 to 78 — from Nassau County’s Vietnam Veterans of America in the New York City Veterans Day parade, the nation's biggest, said president Steve Bonom, who helped organize the Hicksville-based group's participation. There are a total of 319 members in the Nassau chapter.

The roots of Veterans Day extend back to the cessation of fighting between Germany and the allied nations in World War I — an armistice that commenced on the eleventh hour of the eleventh day of the eleventh month of 1918.

Veterans Day began being celebrated in its present form in 1978.

This year on Long Island, ceremonies included a flag retirement in Kings Park; a wind ensemble playing patriotic songs in Patchogue, a parade and church service in Southampton; a ceremony at the American Legion post in Wantagh; and a patriotic rock-n-roll musical tribute in Selden.

In Smithtown, the way to Veterans Plaza was lined by American flags on both sides of Main Street. The plaza filled Thursday morning with mostly gray-haired men from the town’s American Legion and Veterans of Foreign Wars posts, pint-size Scouts, and singers from the two local high schools who performed rousing versions of "God Bless America" and "America the Beautiful" to cheers.

"If you want to thank a soldier, be the kind of American worth fighting for," Assemb. Michael Fitzpatrick (R-St. James) told the crowd. "Emulating America's core values of inclusivity, passion and freedom for all is the ultimate tribute."

Others spoke about the veterans who had shaped their lives. Smithtown resident Maribeth Siskind recalled her father, James F. Robinson Sr., who told her about leaving training at what is now the site of Brookhaven National Laboratory, but during World War I and World War II, was home to the Army's Camp Upton. Siskind's dad told her he left "on a train at night and having no idea where the train was going." Years after his death, Siskind said in an interview, she visits the Smithtown plaza every Memorial Day and Veterans Day.

"It’s a good way to remember him," she said.

For Suffolk County Legis. Leslie Kennedy (R-Nesconset), Veterans Day observance is a family tradition instilled by her father, William Lardi, a World War II Marine and Purple Heart recipient who died when she was 18.

Lardi never joined veterans associations and said little about his military service, Kennedy said in an interview: "He just worked and took care of his family … he taught me about honor and duty and service."

He also taught her that "sometimes we have to fight for us to stay a country," she said.

Thursday’s ceremony marked 20 years since dedication of the plaza in the center of downtown, said Tom Mooney, 74, an Army combat engineer in Vietnam and service officer of Smithtown VFW Post 10870.

In Freeport, Gregory L. Hudson, 63, who served in the Army, marked Veterans Day on the front lawn of Freeport Memorial Public Library, with about three dozen others.

"I don’t schedule anything on that day. It’s just my day," he said of Nov. 11 every year. "It means more to me than Christmas and all those other holidays because serving the country [is] trying to make sure that everybody, every citizen in the country has the freedom … to do whatever it is that they want to do."

At the Manhattan parade, a wreath-laying ceremony at Madison Square Park memorialized the 20th anniversary of the terrorist attacks of Sept. 11, 2001, and celebrated the American military’s response.

Among the parade spectators were Long Islanders Karen Katz, 58, of Valley Stream, with her daughters Brianna, 21, and Michelle, 26. The trio said they were there to celebrate veterans and the military.