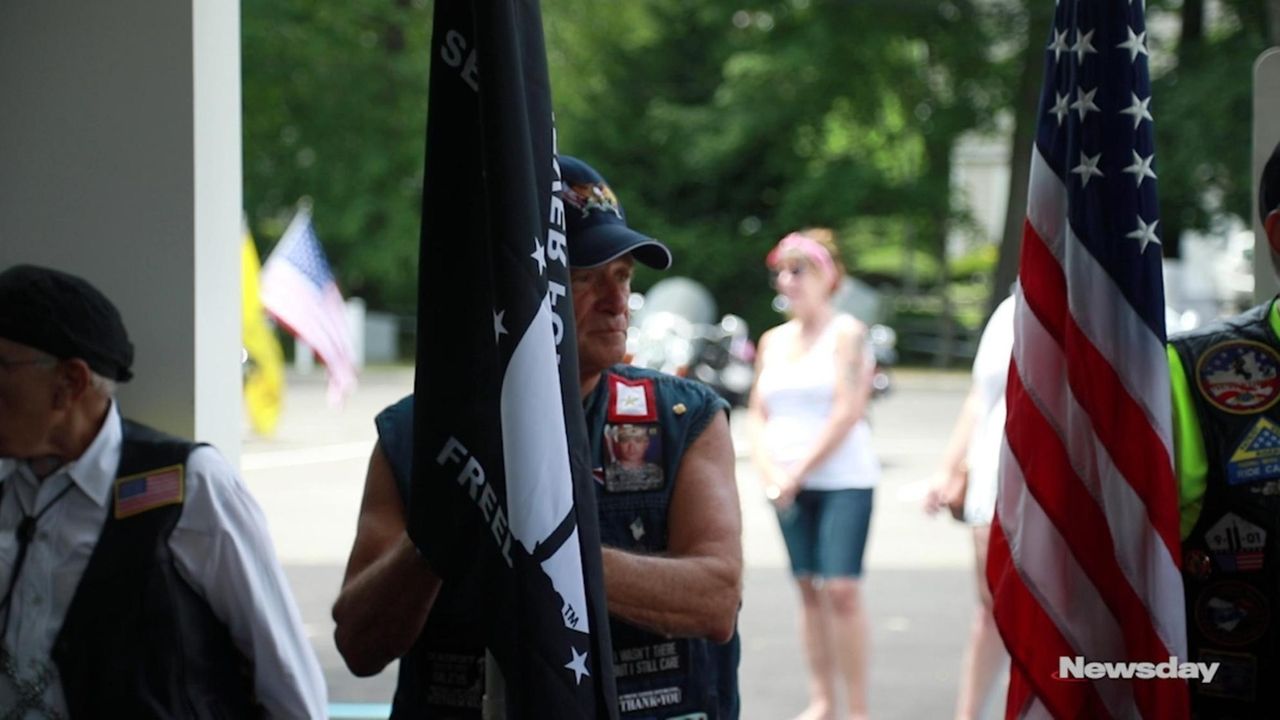 Missing in America Project and the Claude R. Boyd-Spencer Funeral Homes, as well as other Dignity Memorial providers, held a service at Long Island National Cemetery on Thursday to honor veterans who died either homeless, indigent or without any family. Credit: James Carbone; Newsday / Shelby Knowles

In the end, they were not alone.

A few hundred Long Islanders gathered in a military cemetery Thursday to offer a proper funeral service for five elderly veterans who died either homeless, indigent or without any family.

Those who attended — local veterans, Boy Scouts, firefighters and others — formed a circle around the five funeral urns, laid out near the tall flagpole at Long Island National Cemetery in Pinelawn.

All five vets died in recent years but their life stories, cause of death or even their exact Long Island connection remains largely unknown, said Charles Spencer, a local funeral director and Long Island chairman of the Dignity Memorial Homeless Veterans Burial Program. The program works with the Missing in America Project to identify veterans who die homeless, poor or without any family to claim them, and provides the vets with a service and resting place.

The groups have provided similar services for some 25 vets on Long Island, and 1,600 veterans nationally.

"These veterans died and had no one," said Spencer, who operates the Boyd-Spencer Funeral Homes in Babylon and West Islip. "We want to make sure these people are not forgotten. They served their country, and it's up to us to honor them."

About 40,000 veterans have experienced homelessness, according to the U.S. Department of Veterans Affairs. Spencer, himself a veteran from the Vietnam War era, said that improvements in battlefield medicine have saved more people wounded in war. But many come home physically challenged for civilian life and emotionally scarred by the traumatic experiences.

Sitting in the front row Thursday, veteran Al Caltabiano, 73, said he understands the mental anguish that can linger after battle. Lightning and thunder bring back the time when a piece of shrapnel struck him in Vietnam, collapsing his right lung.

"I get flashbacks of the day I was wounded," said Caltabiano, of Bethpage. "The mortar rounds, the explosions, the flashes, the sound, the smoke and hundreds of pieces of shrapnel hurtling toward me."

The generally quiet and still military cemetery — thousands of identically sized white headstones stretching across green fields — became the scene of a community coming together with a solemn purpose.

Two fire trucks, provided by the Deer Park and East Farmingdale departments, stretched their ladders to the sky and hung a huge flag between them. Monsignor Mark Rowan of St. Kilian Roman Catholic Church in Farmingdale sprinkled holy water on the urns, which rested on a long table beside carefully folded American flags. Local VFW posts came out in force.

Philip Strehl, commander of American Legion Post 449 in Farmingdale, raised a dignified salute to the dead.

"Five reasons," said Strehl when asked why he attended, and then he pointed to the five silver urns. "Nobody claimed them, so we claim them. Now they'll rest alongside their sisters and brothers, like we all hope to do someday."

The service ended with a gun salute, and the sound of shots reverberating over the cemetery served as a reminder of the horrors of war.

That was followed by the mournful notes of a bugler playing taps.

As people walked back to their cars, Lou Iuzzini, 83, of West Bablyon, wiped away a tear. The Korean War veteran said he didn't know the five who were memorialized. But the ceremony brought home to him the importance of his own family, the sorrow of loneliness, and the healing power of community.

"I'm glad to see everybody here," he said. "They received the funeral they deserved."

Correction:  The age and military rank of Franklyn R. Lansner Sr. were incorrect in an earlier version of this story.

Son of vet laid to rest by group: He wasn't homelessEthan Beiser said he was shocked and angry when he learned his father had been laid to rest by a group that provides funerals for homeless veterans.