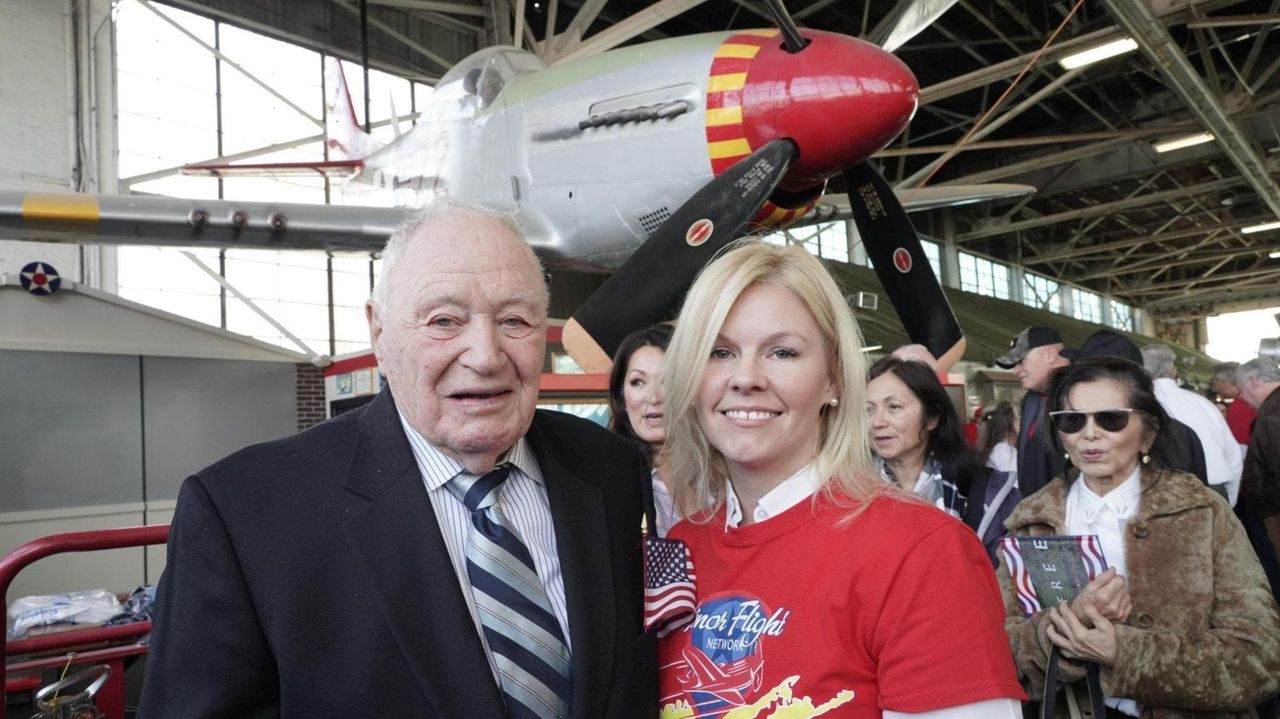 A sweet reunion between an aging veteran and the volunteer who helped him get around during a trip to the war memorials in D.C. Credit: Newsday / Debbie Egan-Chin

Saturday marked a sweet reunion between an aging veteran and the volunteer who helped him get around during a day trip to the war memorials in Washington.

Strangers at the start, Hugh Niland, a veteran of both World War II and the Korean War, and Sarah O'Connor, a wife and mother involved in veterans causes, had been paired on a Sept. 21 trip to the capital sponsored by Honor Flight Long Island.

Together throughout the day, the duo came to know each other as they joined 50 other Long Island vets and their "guardians" touring the monuments. Honor Flight Long Island, which has provided these trips to more than 1,500 vets, offers the vets plane fare, escorts and wheelchairs to get around.

O'Connor, 39, of Cold Spring Harbor, was assigned to wheel around Niland, 89, of Lindenhurst.

"I think we talked all day," she said.

They met for the first time since that day at an Honor Flight ceremony Saturday in the American Airpower Museum in Farmingdale, where the vets came together to receive a commemorative book of photos from their adventure.

Right away, Niland reached out and gave O'Connor a big hug.

"I missed you," he told her, as he introduced her to his wife, Connie.

She, in turn, invited Niland and his family to join her family for holiday dinner.

Amid the smiles and picture-taking, the two reminisced about their trip. They had been featured in a Newsday story chronicling their first meeting and departure from Long Island MacArthur Airport in Ronkonkoma.

For Niland, who is among those vets who felt underappreciated after the Korean War, the free trip represented a big step toward making up for that.

"I was never treated so well," he said.

O'Connor has a big place in her heart for veterans. Her husband served during Desert Storm, and she has tracked relatives back to the Civil War and Revolutionary War. Being an escort on the trip, she said, was a way to thank the vets.

"It was a huge honor," she said. "It was wonderful to see the joy of the veterans interacting with each other."

After the vets landed in Baltimore, they boarded a bus and received a motorcycle escort.

The Korean War Memorial provided a particularly poignant moment. O'Connor said she could see Niland and the other vets turn quiet and reflective.

"It was a meaningful moment," she recalled.

For herself, the memorial, which features statues of soldiers, brought her closer to the experience of her two uncles who fought in that war.

"They [the statues] looked so real," she said. "They looked so miserable, with all their equipment and rain gear. I thought how scary it must have been."

Niland, who served in the Army during the Korean War, said it brought back painful memories.

"Kind of more depressing," he said. "You think about things."

A highlight for both was the reception they received coming home off the plane, when they were greeted at the airport by a band, family members and numerous Boy Scouts and Girl Scouts.

"The noise was unbelievable," O'Connor said.

For Niland, who joined the Merchant Marine in the last days of World War II, the joyous scene brought to mind the cheering that accompanied the end of that war.

As Saturday's ceremony ended, O'Connor urged him again to bring over his family for a holiday dinner. He asked for her address.

Then they hugged again.