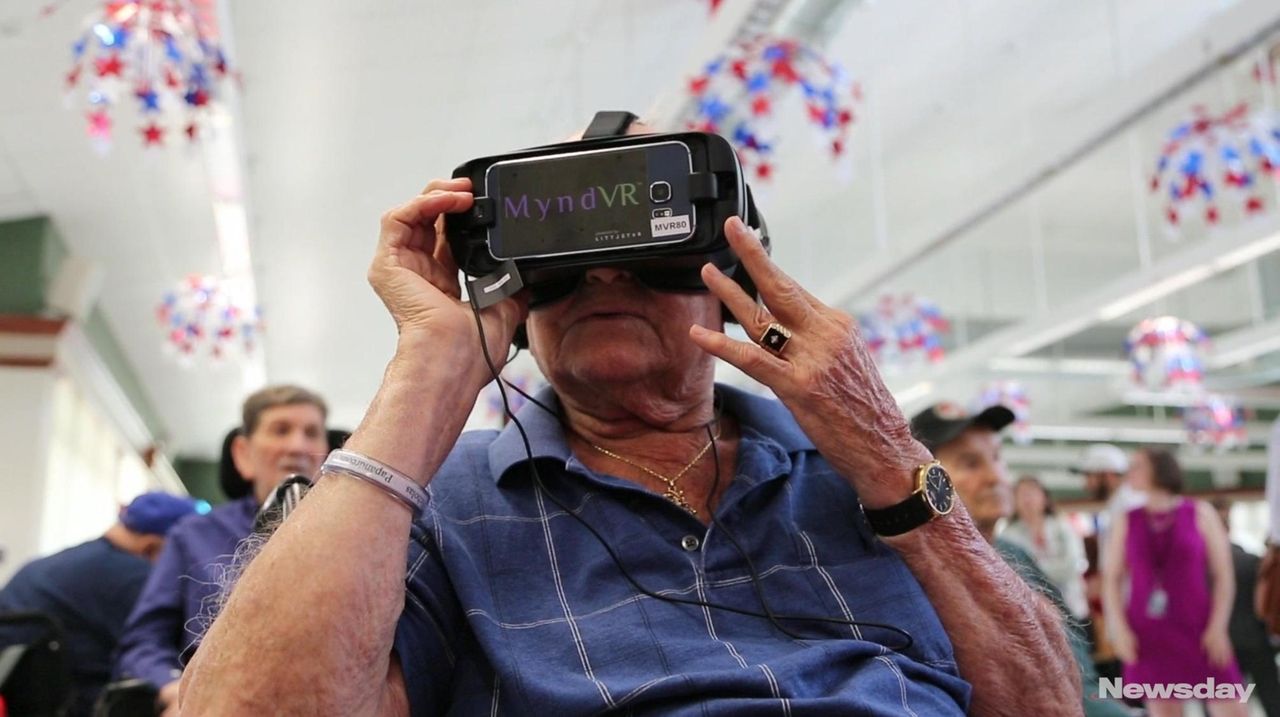 The Long Island State Veterans Home in Stony Brook uses virtual reality devices to bring exotic experiences to its patients, seen here on May 2. Many of the residents are too old or ill to travel, and before they were able to use the devices, some of them did little more than sit alone in their rooms. Credit: Barry Sloan

Ed Kiernan, 95 and in a wheelchair, slipped on pair of virtual-reality “goggles” and a smile gradually spread across his face.

A Marine who commanded a 90 mm anti-aircraft gun during the World War II Battle of Guadalcanal, Kiernan spent the next several minutes at the Long Island State Veterans Home watching specialized video images that created a sensation that placed him inside the scenes he was witnessing.

“I can’t get over it,” he beamed afterward. “I drove an airplane and landed it on a carrier. I was amazed by what I accomplished.”

A technology that bloomed in the age of joystick-thumbing millennials is now providing “ooooh’s” and ear-to-ear grins to old soldiers born generations ago. And those entrusted with looking after the veterans say it is broadening their lives and enhancing their care.

The Long Island State Veterans Home is using virtual reality to bring exotic experiences to its patients, many who are too old or sick to travel on adventures of their own, and some who once wanted to do little more than sit alone in their rooms.

The state-run geriatric nursing facility in Stony Brook has acquired 10 virtual-reality “goggles” — headsets that allow users to visually immerse themselves in virtual experiences, such as gliding along a river in India, swimming among a school of dolphins, or following the flight of a hummingbird as it flits and darts in search of nectar dinners.

The veterans home leased the equipment from California-based MyndVR through a $20,000 grant from Bowlers to Veterans Link, a 75-year-old organization that uses bowling tournaments to raise money for recreational programs benefiting veterans. The organization’s chairman, local bowling magnate John LaSpina, contacted the nursing home to make the grant.

“We believe virtual reality is the next step in providing better care for our residents,” said veterans home deputy director Jonathan Spier.

Virtual-reality “goggles” are actually wearable cellphone sized video screens that include sensors that detect where in the scene the viewer’s eyes are looking. Acting on that information, the video software shifts the scene in a way that simulates the perspective of a viewer scanning left or right, up or down — providing a perspective that immerses the wearer in a virtual experience.

The viewer can select from a library of video scenes simply by peering at a menu at the lower edge of the viewer’s field of vision. The library includes dozens of scenes, including an underwater swim among a pod of dolphins, a walk along the streets of distant city, and a driver’s-eye view of a NASCAR race.

“Who would know you could put these goggles on and be in Paris, or on an aircraft carrier,” said James Salidino, 71, of St. James, a Vietnam veteran who uses a wheelchair because of Parkinson’s syndrome he attributes to Agent Orange exposure. “It was like I was right there.”

Experts say the technology is particularly suited to elderly veterans whose age or service injuries make it hard to get out for adventures of their own. Therapists say that, in addition to overcoming physical limitations, virtual reality can also be effective in addressing the depression that can arise as people transition from independent lives to the more stark confines of nursing homes.

Lara Ashmore, director of emerging technologies at the University of Texas Center for BrainHealth, said experiencing novel situations stimulates the neurotransmitter norepinephrine within the brain, conditioning it to seek further new experiences, which can draw depressed people from their shell.

“Because it enables an individual to experience the feeling that they are in the experience, it allows them to emotionally connect and experience joy and happiness retrieved from long-ago memories of positive experiences, like riding on a roller coaster,” said Ashmore, whose center develops virtual-reality programs.

“It is actually becoming more and more prevalent for targeting a specific diagnosis like depression,” Ashmore said of the use of virtual reality among geriatric patients. “But also for entertainment because older patients have such limited options.”

Albert “Skip” Rizzo, a virtual-reality researcher at the University of Southern California’s Davis School of Gerontology, said the technology has shown promise in helping veterans who are grappling with post-traumatic stress disorder, an emotional condition in which people often relive past intensely emotional experiences, such as being taken prisoner or witnessing death. A Department of Veterans Affairs medical center in Miami has used VR goggles to re-expose PTSD patients to traumatic experiences under controlled circumstances, as a way of helping them learn to overcome their fear response.

“An active part of virtual reality is where people are interacting in a 3D environment to revisit a traumatic experience in a setting they feel safe in, and can work through it,” Rizzo said. “It has crossed the tipping point.”

Therapists at the State Veterans Home said they exercise caution so that the virtual imagery does not retraumatize PTSD patients, but are confident that the technology has been a great benefit to veterans who mostly don’t get around much anymore.

“Not all of our residents can still play golf or go on trips to a baseball game,” said Michelle Cheslak, the facility’s director of therapeutic recreation. “These can bring new experiences to them.”

1:37
'A weight and a blessing,' says daughter who takes over the reins at LI church
Gene Cook's name will appear on ballot, judge rules
Assembly panel will 'soon consider' impeachment articles against Cuomo
Judge: Spota, McPartland face 57 to 71 months under federal sentencing guidelines
Jurors in Thomas Valva case will consider video evidence, judge rules
Cases again near 600 on LI, hospitalizations up, NY figures show
Didn’t find what you were looking for?