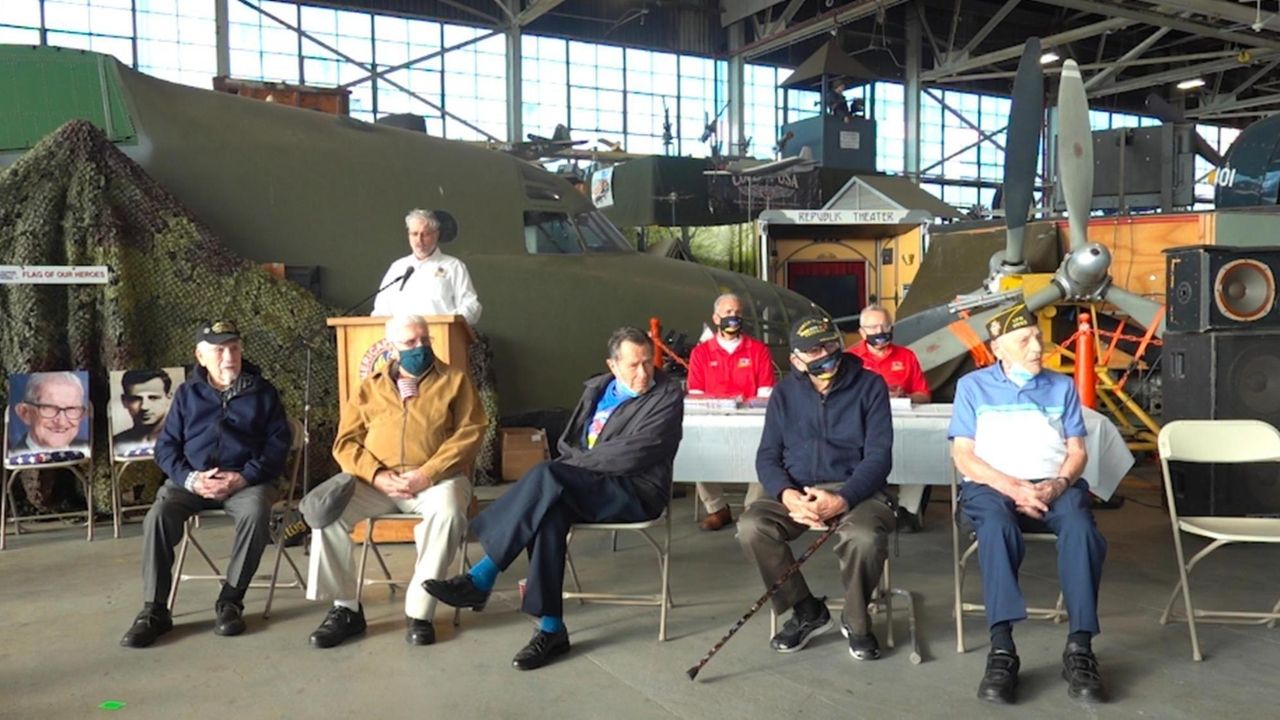 Dominick Critelli of Floral Park reunited Saturday at the American Airpower Museum in Farmingdale with several other local World War II veterans who flew together in October to Washington, D.C., as nearly 100 people in attendance thanked them for their service. Credit: Debbie Egan-Chin

Days ahead of the 80th anniversary of the attack on Pearl Harbor, several local World War II veterans who flew together to Washington, D.C., in October were reunited Saturday in East Farmingdale as nearly 100 people in attendance thanked the veterans for their service.

With their families and elected officials in attendance and the U.S. Coast Guard Auxiliary Band playing patriotic music, nine WWII veterans were recognized with a "Ceremony of Honors" at the American Airpower Museum. The veterans were chosen by Honor Flight Long Island, a Southampton-based veterans organization, to be its first veterans group since the onset of the COVID-19 pandemic to take a one-day free flight to the nation’s capital after the pandemic forced the organization to cancel planned flights in 2020 and 2021.

Bill Jones, president of Honor Flight Long Island, told Newsday that several WWII veterans in their 90s on the waiting list since the pandemic pushed to take the trip. The organization wanted to give veterans the chance to visit Washington while they still could.

The veterans flew from Long Island MacArthur Airport in Ronkonkoma to the capital, visiting historic locations such as the World War II Memorial, the Marine Corps Memorial (aka the Iwo Jima Memorial) and Arlington National Cemetery for a special wreath-laying ceremony and the changing of the military guard at the Tomb of the Unknown Soldier.

As he looked at the personalized tribute journal given to the veterans filled with photographs from the trip while family surrounded him, Dominick Critelli of Floral Park said the Saturday tribute was one of the nicest things that could have been done for veterans. Having served in the Army in the 95th Infantry Division of the Artillery Aviation Liaison Unit, Critelli, 100, said his favorite part of the trip was visiting the Tomb of the Unknown Soldier, a place he had never seen before in person and never thought he would see.

"To explain how it felt, it would take me a week," Critelli said, adding he also made new friends such as Vincent DePalo, an Army Air Corps veteran nicknamed "Jimmy" by other vets.

DePalo, 98, of Bethpage, was awarded three air medals for flying in dangerous missions including Operation Tidal Wave, an Allied bombing of Axis oil refineries in Romania in 1943. DePalo, who had never visited Washington before, said going to the memorials was "a fantastic experience just to see the whole thing."

Of the Saturday festivities, DePalo said they left an impression on him.

"It’s fantastic," DePalo said. "It’s wonderful to feel appreciated for what we did."