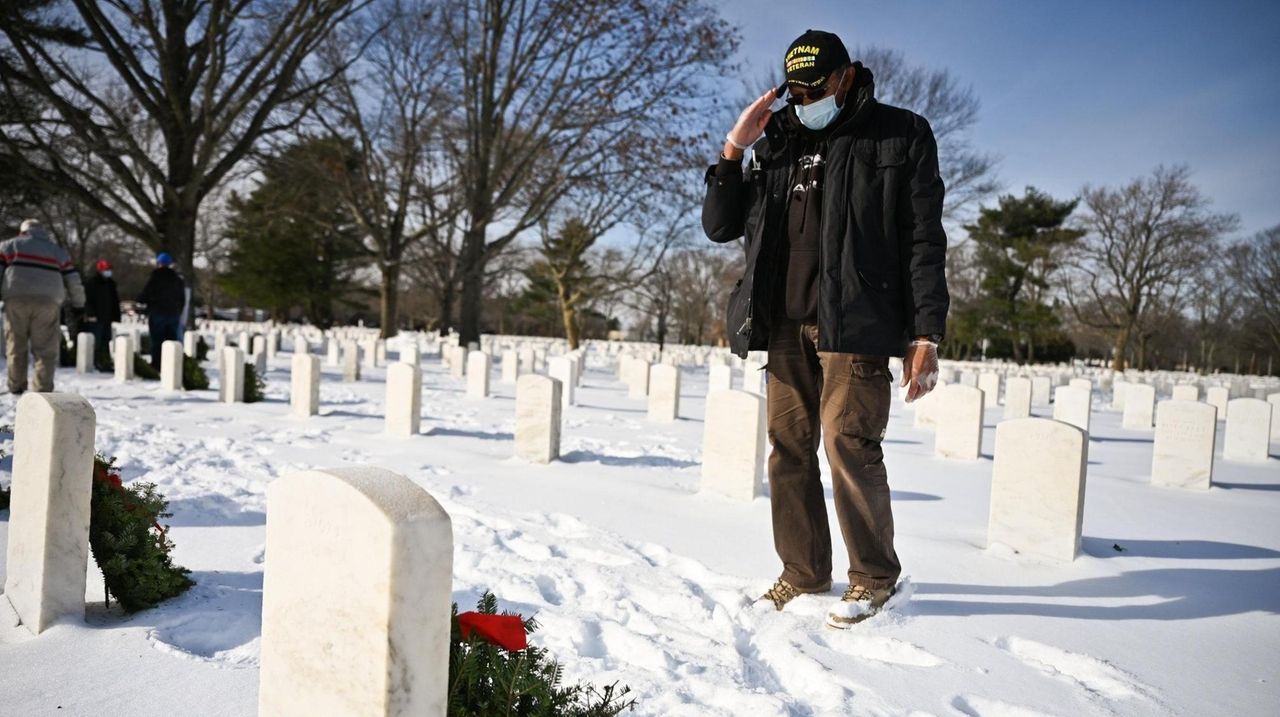 As part of the annual National Wreaths Across America Day, Long Islanders gathered at Long Island National Cemetery in Pinelawn on Saturday to place wreaths on the graves of veterans, mostly on the sites of people they didn't know. Credit: Newsday / Steve Pfost

Mike Carroll walked through the snow at Long Island National Cemetery on Saturday and laid an evergreen holiday wreath against the gravestone of a man who died during World War I.

"Leo Hogan, merry Christmas," Carroll, of Greenlawn, said to a veteran who is a stranger to him but also represents all those who served their country.

On Long Island and across the nation Saturday, people took time to honor veterans as part of the annual National Wreaths Across America Day.

Carroll, 78, did so as part of a group of 10 from the Jaguar Drivers Club of Long Island, of which he is president. Boy Scouts, Girl Scouts and Cub Scouts were among others who laid wreaths festooned with red ribbons throughout the sprawling national cemetery in Pinelawn, mostly on graves of people they didn’t know.

About 10 miles to the north, more than 40 people gathered at the Old Burying Ground in Huntington to pay their respects to some of the country’s first veterans, said Sarah O’Connor, regent of the Ketewemoke chapter of the National Society of the Daughters of the American Revolution, which helped organize the wreath-laying there. Most were born British subjects but died American during or after the Revolutionary War, she said.

"They’re the men and women who achieved American independence," she said. "Without them, we would have no veterans to honor. They would have all been British subjects. It’s because of them we have country."

With COVID-19, this year’s Wreaths Across America was different. Participants in the Long Island National Cemetery event first arrived in their cars at the parking lot of the nearby Adventureland, where volunteers loaded boxes of wreaths directly into trunks, to avoid contact. Masks and gloves were required.

Earlier this year, the pandemic led the U.S. Department of Veterans Affairs to cancel the traditional Memorial Day placing of U.S. flags at the cemetery and at Suffolk County’s Calverton National Cemetery.

Ivan Scarborough, 74, of Garden City, who has participated in previous Memorial Day flag-placings, said he was thinking often Saturday of soldiers he served with in Vietnam who didn’t make it home alive.

"I kept remembering what my fallen comrades and I went through," he said.

Maryann Dellinger of East Northport first laid wreaths at strangers’ graves before doing so at the grave sites of her father and a cousin. The cousin’s parents are dead and his siblings live in Las Vegas and couldn’t place the wreaths themselves, she said.

It’s important to honor "all of the veterans who have given their lives for us," she said. "Not only on Veterans Day and Memorial Day should we honor them. We should honor them all the time, especially during the holidays. The holidays magnify the emptiness when you lose someone."

As hundreds were laying wreaths around the cemetery, Bob Chavanne of Merrick arrived with his cornet to play taps, which provided a somber musical accompaniment.

"It’s so important to never forget the sacrifices," he said afterward. " ... They're the true heroes in my heart and soul in our country. And I wouldn’t be standing here if it wasn’t for our great veterans."